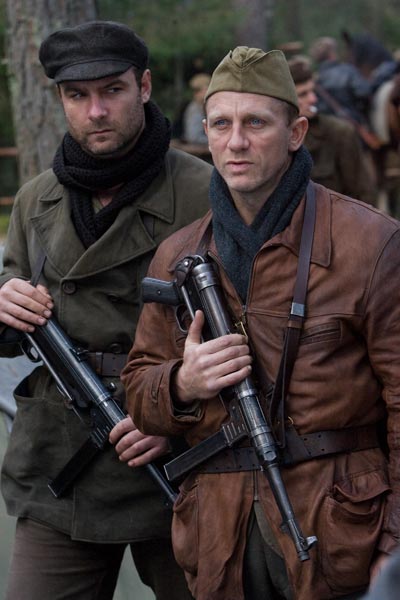 “As for the action which is about to begin, it takes place in Poland – that is, Nowhere.” Alfred Jarry presenting his play Ubu the King in 1896.

Long, long ago, in the dark ages on the wrong side of an Iron Curtain, one of our favourite forms of defiance was mocking the absurdities of the Soviet system by telling “Russian jokes,” particularly of the “Radio Yerevan” series. Here’s a classic one: “Question to Radio Yerevan: ‘Is it true that they give away cars for free in Moscow?’ The radio answers: ‘Yes, it is true; however, not in Moscow but in Saratov, not cars but bicycles, and they don’t give them for free but sell them on subscription.'”

That is exactly what comes to mind after seeing Edward Zwick’s epic film Defiance. It describes one of the lesser known episodes of World War II: the story of a group of Jewish partisans led by the Bielski brothers, who escaped the Holocaust in Nazi-occupied Poland and survived the war, protecting some 1,200 Jewish refugees in the forests.

According to the opening titles, it is based on a true story, although “inspired by” would seem more appropriate. Another piece of information which flashes onto the screen tells us about the location of the events – “Belarus, 1941.” This is one of the original sins of the movie.

The Bielski brothers were Polish Jews living near Nowogrodek, a town in northeastern Poland. In September 1939, following the Soviet invasion of Poland, that area was annexed by the USSR, and it became part of the Belarussian SSR. The NKVD (Soviet Secret Police) task forces arrested thousands of “anti-Soviet elements.” In 1940, some 22,000 Polish prisoners of war and members of the intelligentsia were executed on Stalin’s orders in the Katyń massacre. About 10 percent of those murdered were Polish Jews, including the Chief Rabbi of the Polish army, Baruch Steinberg.

As it was, the Bielski family collaborated with the Russian occupant; Tuvia Bielski, who served in the pre-war Polish Army, became a clerk in the Soviet administration. After Nazi Germany broke off its alliance with the Soviets and attacked the USSR in 1941, the Bielski brothers fled to the nearby forests and formed an armed squad. Soon, hundreds of Jews found their way to the Bielski partisans. They established a well-organised camp in the Naliboki Forest, a vast woodland with few roads. The Germans rarely ventured there, and the area became a base for some 20,000 Soviet partisans, as well as soldiers of the Polish underground Home Army. The Bielski brothers created a sort of self-contained kibbutz called “Jerusalem,” with kitchens, a slaughterhouse, a mill and bakery, a distillery, a field hospital, and even a synagogue. They provided neighbouring Soviet partisan troops with food and alcohol, as well as guns repaired in their gunsmithing workshop.

After the Germans revealed the Katyń massacre in 1943, Stalin broke off diplomatic relations with the London-based Polish government-in-exile, and soon a small Polish-Soviet war broke out in the Naliboki Forest. As of December 1943, Polish Home Army soldiers had to fight the overwhelming numbers of both regular German troops and Soviet partisans, including some members of the Bielski group.

So how did the scriptwriter and director deal with these controversial issues? Well, they simply avoided them completely. There is no reference to pre-war Poland, the action is placed in some strange, wooded Neverland, the local population speaks Russian, and the main characters talk in a horribly-accented English – substituted for Yiddish, perhaps? Tuvia Bielski, played by blue-eyed James Bond star Daniel Craig, makes noble declarations about only obtaining food from those villagers who have enough to share; in reality, his men would often raid and plunder local villages for supplies, sometimes killing resisting peasants, who only willingly supported Polish partisans.

But is it at all feasible to show otherwise brave Jews in a bad light and not be immediately accused of anti-Semitism?

The film tells a great story of survival and resistance, and the Jewish fighters affiliated with the Soviets do engage in combat with the Germans, even though they never actually fought with tanks, as shown in the movie.

On the other hand, who considers Hollywood films to be a credible source of historical truth? Unfortunately, that is not a rhetorical question, since actually tons of people do, drawing their vague knowledge from the movies as if they were documentaries.

Those who do not care much for intricate historical issues might at least expect a decent war movie, a sort of Fiddler on the Roof meets The Dirty Dozen, but even that is not the case here. The acting is at best mediocre, especially the emotions on Daniel Craig’s face, which could be likened to a brick. The supporting characters are completely overshadowed by the two protagonists. All in all, Liev Schreiber’s performance as Zus Bielski is the only highlight of the movie, clearly in the running for an Oscar.

The film is too long, for the most part crawling at a snail’s pace, focusing on the miserable conditions of the forest camp, with people dying from hunger, cold and diseases in underground dugouts and log cabins. Tuvia even has to shoot his favourite white horse to feed his people. This is again questionable in the light of the facts.

If the film-makers’ intention was to show the otherwise unprecedented and unknown case of Jewish defiance, why wouldn’t they go further and show them mighty in vengeance for the Holocaust? Were they afraid of the predicament of Steven Spielberg, who, although praised for Schindler’s List, was widely criticised for Munich? Obviously, Hollywood must portray the Chosen Nation in eternal suffering, even when it actually successfully defeats the Nazi oppressors.

Many war movies were made in the communist-ruled People’s Republic of Poland, most of them equally plagued with historical distortions, insinuations and lies. However, some of them achieved cult status and people still watch them today ? because they are simply good movies. Defiance, while due credit for showing an unknown and fascinating story, is not.