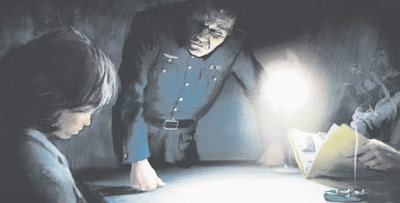 Over the last few months, millions have watched James Bond batter his way through a carnival of villains in a bid to avenge his slain lover, the beautiful double agent Vesper Lynd. Bond’s vendetta made for an entertaining on-screen caper – and a major hit at the box office. Yet an even more fascinating tale lurks behind the fiction.

It seems that Bond author Ian Fleming based Vesper on a real-life spy, Krystyna Skarbek, a Polish femme fatale who ran rings around the Nazis during the Second World War. Skarbek’s exploits have become the stuff of legend, inspiring a slew of biographers and film-makers. Small wonder then that the tale has now been snapped up for a major motion picture.

“She was almost certainly the most remarkable female spy of the Second World War,” enthuses director Agnieszka Holland, who has taken up the reins on the espionage epic.

“Intelligent, courageous, seductive and bewitchingly attractive, men were willing to sacrifice everything for her and go to any lengths to have and keep her.”

Skarbek’s cloak and dagger exploits saw daring raids into occupied Poland, with forays into Hungary, Egypt and Syria. Parachuted into occupied France in 1944, she masqueraded as the imaginary “Pauline Armand,” hiding out in the brush and winning over nervous locals. An uncanny charmer, she even managed to bring animals under her spell, reducing teeth-gnashing Gestapo hounds to puppy-like devotion in her presence (a factor which saved her life on more than one occasion). When her companions in arms were arrested and hours away from the firing squad, Skarbek concocted an outrageous plan to liberate them.

“For her, mediocrity spelled death and a life half lived,” says producer Raf Buks. Indeed, friends joked that Skarbek could do anything with a stick of dynamite, besides eating it.

Director Agnieszka Holland (Europa, Europa, The Secret Garden, Washington Square) has a string of international productions under her belt, and she’s even had a crack at shooting episodes of cult U.S. cop show The Wire. Her big budget take on the Krystyna Skarbek tale, Christine: War My Love, will also be shot in English, and several stars have been touted for the lead role.

“Christine was a shining member of pre-war aristocratic high society, a beautiful and talented sportswoman,” Holland expands. “Her achievements were exceptional and her exploits heroic.”

That said, the story is far from being a “tally ho” adventure about defeating “the dastardly Hun.” Like Holland herself, Skarbek was half-Jewish, and the war ultimately severed her from the land of her birth.

“She was the daughter of a Polish nobleman, a playboy and spendthrift (who she adored), and a rich, depressive Jewish mother (her husband married her for her fortune), who irritated and slightly embarrassed her,” the director continues.

“Christine harboured feelings of guilt about her mother throughout her life, and despite all her efforts, resourcefulness and immense courage she failed to get her mother out of the Warsaw Ghetto.”

In her personal life, Skarbek had a string of glamorous suitors, but she was uninterested in high society as such, likewise the pampered life of a kept woman.

“She was unable to maintain a permanent relationship, constantly on the hunt for change, excitement and adventure,” says Holland. “She felt the constant need to test the genuineness and emotional temperature of each new love affair, in the end always choosing freedom and independence, even if the costs for her were loneliness and financial insecurity.”

Her relationship with her wartime employers – the British government – also proved problematic. Skarbek was living in British Kenya when the war broke out, as she had married a Polish diplomat (and former Montana cowboy) with prospects in Africa. When Poland fell to the Nazis, she sought sponsorship from British Intelligence to launch missions back to her homeland. She was given the identity of “Christine Granville,” a bogus journalist. Later in the war, this sparked suspicion amongst some Poles – why hadn’t she fallen in line with the official Polish Underground?

To make matters worse, when the war ended, most Poles – Skarbek included – felt that Churchill and Roosevelt had betrayed Poland in an effort to appease Stalin. To add insult to injury, the British authorities were not supportive of their former star. Xan Fielding, one of Christine’s English comrades in arms, summed up the situation:

“After the physical hardship and mental strain she had suffered for six years in our service, she needed, probably more than any other agent we had employed, security for life. […] Yet a few weeks after the armistice she was dismissed with a month’s salary and left in Cairo to fend for herself.”

As a noblewoman and a decorated war hero, returning to Soviet-occupied Poland was out of the question.

“She could not come to terms with the end of the war, the latest in a long series of defeats for her homeland and for her class,” Holland adds.

But VE Day was not the end of Skarbek’s adventures. According to her biographer Madeleine Masson (and Ian Fleming’s own biographer Donald McCormick), she embarked on a year-long affair with the creator of Bond.

She “remained to the end a charming, witty and enchanting woman,” Holland affirms.

Yet ultimately, this charm would provoke dire consequences from the most unexpected of quarters ? the final twist in Skarbek’s tale sparks conspiracy theories until this day. Raf Buks reveals that the script hinges on this dramatic denouement in post-war London. Skarbek’s past unfolds through a series of flashbacks: “It is 1952, and Christine has been ill and drinking herself into oblivion,” says Buks. “Gordon, a 50-year-old receptionist in the seedy hotel in which she is living inadvertently becomes her confessor.”

“The character and true story of Christine Skarbek is replete with mystery and paradox,” Holland concludes.

“What actually motivated her? Patriotism, a virulent hatred of fascism, the lust for adventure, the need for extreme experiences?”

All those elements were present. Yet “Christine” took many secrets to her grave.