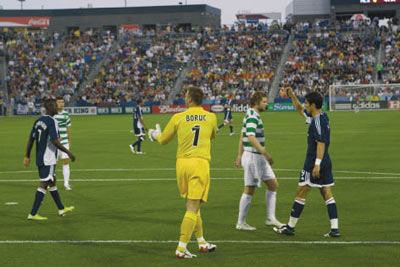 It wasn’t so long ago that Polish football fans could legitimately claim to have one of the best goalkeepers in Europe. After a number of sterling performances at the highest level for both club and country, Artur Boruc was seemingly destined for bigger and better things than the Scottish Premier League.

But it has all gone pear-shaped for the 28-year-old since he excelled for Poland at Euro 2008. A series of off the field incidents and personal problems have clearly taken a toll on the custodian’s form, putting his place as first choice keeper with the national team and club side Celtic under scrutiny.

The eccentric Pole has been on a destructive streak of late. Shortly after Euro 2008, Boruc, along with national teammates Dariusz Dudka and Radoslaw Majewski, were suspended from the national team for breaching a curfew and going on a booze binge following Poland’s loss in a friendly against Ukraine.

More controversy was soon to follow. Having undergone knee surgery in Scotland, Boruc was granted time off by Celtic, which he used to return to Poland to recover from the injury. However, his intimate relationship with controversy continued, only this time on home soil. During another alcohol-infused night out, he was pictured chugging beer, smoking cigars and kissing a mystery girl in Warsaw.

It was later revealed that the object of the Pole’s affection happened to be Sara Mannei, a part-time model and former contestant on the Polish Pop Idol, whose relationship with Boruc has since been made public.

Following the birth of his first child in August, Boruc had undergone a high profile split with his wife, and his public display of affection with Mannei drew outrage in Poland. He was soon the subject of strong criticism at home, and a number of vile threats were made against him on online web forums.

There is little doubt that Boruc’s headline-grabbing antics have had a negative impact on his form, particularly for Glasgow giants Celtic. Last month, the Pole was ordered by coaching staff to partake in additional training, following a costly mistake in the Scottish Cup fourth round game against Dundee United.

With the match locked at 0-0, the Celtic keeper raced out of his box to counter a Dundee attack, only to completely miss an attempted left-foot volley clearance and leave Dundee striker Colin McMenamin free to roll the ball into an empty net.

Although Celtic recovered to win 2-1, Boruc’s blunder was the key talking point after the game, as pressure began to mount on Celtic manager Gordon Strachan to drop the wayward goalkeeper.

What’s more, the mistake against Dundee was one of a series of costly errors supplied by Boruc, in what has been a troubled season at best.

During a league match against Hibernian in December, which Celtic coincidentally lost 2-0, the error-prone keeper was the culprit in another embarrassing mistake. On this occasion, a seemingly harmless, 45-yard effort by John Rankin of Hibernian caught Boruc off guard, as poor positioning and a loss of footing proved to be fatal.

Yet Strachan has refused to publicly criticise these lacklustre performances, conceding only that Boruc “hasn’t had the best year” and rejecting rumours that he will drop him from the first team squad.

Teammates have also leapt to Boruc’s defence, with Celtic left back Lee Naylor saying in January that the Pole is the best keeper in Britain.

The show of solidarity has reminded critics who have pounced on Boruc’s disappointing season that it wasn’t so long ago that his reputation was soaring. Since signing with Celtic in 2005, the Pole has produced a string of stellar performances on the international stage, and his ability to be a match winner not only gave him cult status among supporters, but also earned him the tag of the “Holy Goalie” in Scotland.

The goalkeeper’s performances prior to and during Euro 2008 even caught the attention of the likes of Arsenal and AC Milan, who were eager to sign the Polish international last year.

Although whispers suggesting a potential switch to a bigger European league have waned for the time being, there is little doubt that, if able to put a troubled few months behind him and fulfil his massive potential, Boruc will appear on the wish list of some of the world’s biggest clubs once again.

With many thanks to Brett Halverson for his photograph.