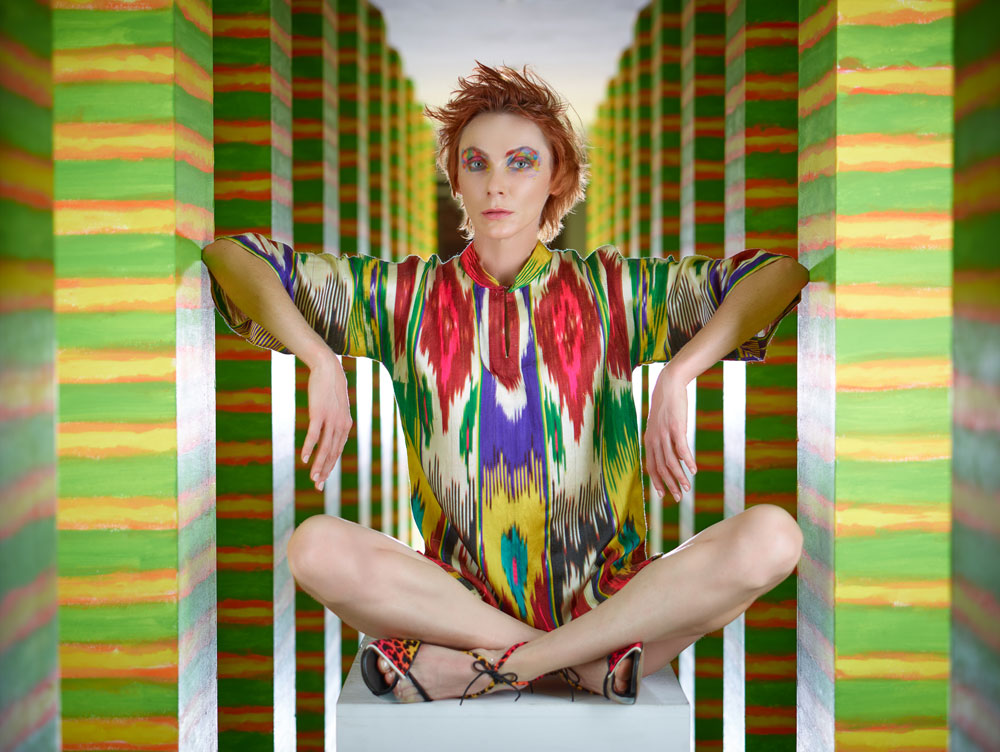 Where is men’s fashion? There is just one miserable trench coat out of 400 items to represent mankind’s clothing in Krakow at the showcase “FASHIONable in Communist Poland,” co-organised with the National Museum in Wrocław. Despite the lack of guides in English and bilingual catalogue, it doesn’t take too much to understand that women rule in the exhibition space.

Małgorzata Możdżyńska-Nawotka, one of the curators has her own explanation for the incredibly unbalanced sex-ratio: “At that time, there was no appropriate outfit for Polish men. My father would wear exactly the same sweater at work and at home.

“Not to mention that there was not so much pressure on men to look good in the communist era,” she adds.

Even the mustached Polish models from the 70s as filmed by the state-owned television (TVP) played a secondary role on the catwalk. The footage from the fashion shows might leave the visitors with the feeling that the posers were overshadowed in terms of ebullience and showmanship by their female counterparts.

Ironically enough, the few remaining traces of masculinity displayed at the museum can be found in women’s fashion from the following decade that shows a penchant for oversized clothes made from scraps of wool, short hairstyles, and gaudy shoulder pads irreverently displayed under Jaruzelski’s oppressive regime. In the 80s people were allowed to sashay provided that they would respect curfew.

Women in Poland would make the best use of any shreds of fabric to reinvent their look. According to Jamie Stokes, the Polish verb “kombinować” refers to “a catch-all term for a range of activities involving the circumnavigation of laws, rules, or normal procedures.”

The war was over and ladies would grin and bear it in the subsequent four decades. What better than jackets made from parachute material or silk maps could illustrate the kombinować skills of Poles in the post-war period? In the meantime, girls from the countryside wore the so-called łączki, a type of floral robes that were supposed to show again some colours and hope after the wartime devastation.

Nonetheless Dior’s New Look was right around the corner. At the turn of the 40s and 50s, fashion magazines from Western countries circulated under-the-table and a few samples of the trendiest apparel would reach Poland in suitcases. Hence, Poles would know that they should use their cut-and-stitch talent to emphasise the bust and hips hence.

During the period of the so-called “small stabilisation,” the new leader of the Communist Party Władysław Gomułka relaxed censorship. At the beginning of the sixties its desk-jockeys already gave up with the idea of devising the official apparel of the Socialist Worker, a project they had pursued with little enthusiasm.

In order to satiate the elite, Polish authorities launched Moda Polska a state-owned fashion house headed by Jadwiga Grabowska who was nicknamed ”The Polish Coco Chanel”. Moda Polska workers had the rare privilege to travel abroad and grasp the newest tendencies from the Paris catwalks.

In the book “Z politycznym fasonem. Moda młodzieżowa w PRL i NRD”, fashion historian Anna Pelka confirms that Poland’s capital became the fashion hot spot of of the Eastern Bloc: “It turns out that Warsaw of the 1960s was an icon for the Eastern Berliners”.

A bunch of adroit shoemakers from the most populous cities in Poland such as the extravagant Brunon Kamiński proved that fashion could be more a matter of craftsmanship than of simple kombinować-based savvy.

Still, the exceptions do not always prove the rule, and the quality of garments and accessories was still relatively poor. In the documentary Political Dress (2011) directed by Judyta Fibiger, Polish tailor Jerzy Turbasa confessed that his mother would return home every two days limping because one of her heel would break.

In the 60s many state-run companies entered the race to produce a valid substitute of denim using low-quality cotton imported to Poland. The jeans made from “teksas” and “arizona” had a grayish hue, did not fit well, now wear out evenly. Two decades later, Odra, a now defunct firm from Szczecin made a name for itself in Poland with his marbled jeans.

The exhibition hosted by the National Museum in Krakow is more than a panegyric to the clothes designed by the “three tenors of fashion” in communist Poland. In addition to some of the finest samples created by Jerzy Antkowiak, Barbara Hoff, and Grażyna Hasse, the show displays a number of hidden gems.

One of the best examples is the headgear designed in the 70s by the students of Łódź Fashion School for their final year projects, which proposes a surprisingly delectable blend of Classic, French Revolution, Liberty and Socialist-indigenous motifs.

As both an inexhaustible trendsetter and a Barbara Hoff was the real “bridge figure” during the Communist era and beyond. Thanks to her column on the weekly magazine Przekrój, which contained witty decorum advice and do-it-yourself guides, Hoff contributed more than anyone else to bring Poles closer to the scene.

Hoff was also a trailblazer of fast-fashion in Europe and went on to create pro bono the “Hoffland” brand in 1964. Despite the fact that Poles were already used to queuing, often without knowing what they would get in return, the launch of her collections was often followed by a Black Friday-like frenzy with broken shop windows and a not-so-socialist consumer insanity.

The showcase has been periodized in a curious manner, since the last section displays clothes manufactured until 1994. Perhaps, the curators wanted to suggest that a number of PRL traits survived the transition to capitalism.

In the aftermath of Round Table Talks, second-hand clothing business became suddenly the goose that laid the golden eggs. Used garments from Western brands were given another chance in Poland before the emergence of import-export firms including Wtórpol and Roban.

According to art historian Anna Arno, “Such exhibitions could boost the appeal of retro style clothing in Poland among consumers even further as a side effect.” Now as then, fashion is a weapon of mass distraction regardless of how much a single cloth might be evergreenish.