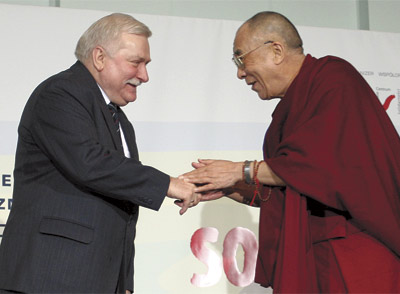 According to a Tibetan proverb, “Excellent people are honoured wherever they go” – this time it happened in Poland.

The Dalai Lama’s visit to Poland was a momentous event. It also provided an opportunity to reflect on Tibet’s independence aspirations, Chinese policy and the achievement of the Dalai Lama himself.

The 14th Dalai Lama (Tenzin Gyatso) seems to be an equally fascinating and curious figure. Since 1959, when he fled from Tibet, he has lived in exile in northern India. For those unfamiliar with Asian politics and culture, he might appear to be a rather strangely dressed religious leader from “the Roof of the World.” For some, on the other hand, he is an “ambassador” of Tibetan Buddhism, a Nobel Peace Prize winner and a champion of human rights. For others, he can be seen as a charismatic politician, who has non-violently fought for the autonomy of Tibet. To those who are or have been oppressed, he constitutes a symbol of non-violent struggle for his nation’s freedom. Finally, for sceptics and his adversaries, the Dalai Lama seems to be a master of self-promotion with a very inefficient political program. Regardless of which “face” of the Dalai Lama one wishes to see, there is little doubt that his role in contemporary world politics should not be underestimated.

When, in October 2007, the Senate of the Jagiellonian University passed a resolution on conferring an honoris causa doctorate on His Holiness the 14th Dalai Lama, it justified its choice upon the Tibetan leader’s high ethical standards in social and public life, his merits in inter-cultural and inter-religious dialogue, his promotion of a peaceful resolution of many conflicts and his non-violent fight for freedom and rights for Tibetans. In the words of professor Beata Szyma?ska from the Jagiellonian University’s Institute of Philosophy, “The Dalai Lama has become a part of the University’s long tradition of bestowing honours upon famous figures such as Pope John Paul II and Mother Theresa.” After receiving the honorary doctorate on the 8th of December, His Holiness met with students and academics in the afternoon. The huge Auditorium Maximum lecture hall was packed with scholars who welcomed the Tibetan leader with a minute-long standing ovation. During the meeting the Dalai Lama dwelt upon fundamental aspects of human life such as the role of ethics, love and compassion.

As much as this event meant for the Jagiellonian University and the city of Krakow, this visit was only one of many stops that the Dalai Lama made during his tour of Poland. He had been invited to Gda?sk for the 25th anniversary of Lech Walesa’s Nobel Peace Prize reception, a festivity that was attended by renowned policy-makers and political activists from all over the world. In Gdansk, His Holiness met with French and Polish prime ministers Nicholas Sarkozy and Donald Tusk respectively. The Dalai Lama ended his stay in Poland in Warsaw, where he spoke with President Lech Kaczynski. Despite the fact that both meetings with Poland’s highest authorities had been labelled “unofficial,” they sparked strong criticism and protest from Beijing.

Although the Dalai Lama’s press bureau expressed that the religious meetings with Buddhist believers were the most important engagements for His Holiness, it was the meetings with politicians that caught the most media attention.

From this standpoint, the crucial and most remarked upon meeting of the Dalai Lama was with French President Nicolas Sarkozy. France, which has chaired the European Union presidency for the last six months, quickly became the subject of a diplomatic assault from the Chinese government. As AFP informed, China’s Deputy Foreign Minister He Yafei issued “a strong protest” on Sunday against Sarkozy’s meeting with the Tibetan leader. According to Chinese sources, the event “undermined the political foundations of Sino-French and Sino-European ties.” Beijing summoned the French ambassador and demanded further explanation. These diplomatic moves have become part of a broader Chinese offensive to punish President Sarkozy for his willingness to talk to the Dalai Lama. In late November, China, traditionally touchy over the Tibet issue, even cancelled the EU-China Summit, a blunt move that The Economist called “a rare breach of diplomatic manners.”

Perhaps the best, and surely the most colourful commentary on this behaviour was given by former Polish president Lech Walesa, who called it the “height of insolence” for China to cancel a meeting with the European Union over President Sarkozy’s plans to meet the Dalai Lama. Mr. Walesa, using his famous plain-speaking skills, said that he was at the least insulted by China’s behaviour. “Who can tell me who I can talk to, who I can invite?” the former president asked, rhetorically.

These questions could also be raised in regard to Chinese behaviour towards Poland after Polish politicians met with the Dalai Lama. Following President Kaczy?ski’s private meeting with His Holiness on Wednesday (December 10th), the Chinese Foreign Ministry immediately summoned the Polish ambassador to China. Moreover, the Chinese government sent an official protest letter to the Polish embassy in Beijing, appealing for Poland to refrain from “decisions harming bilateral relations and violating China’s vital interests.”

But this political wrestling should not cloud the symbolic dimension of the Dalai Lama’s visit to Poland. For many Poles, the Tibetan leader reminded them of the not-so-distant historic experience of the Polish state and the road that led Poland to freedom and democracy.

“Poles survived many difficult stages in their history, but the Polish nation has kept its heart adamant,” stated the Dalai Lama. Considering the Tibetan example, and the hopeless attempts to achieve autonomy, it is also hard not to think how lucky some nations have been in their push for independence.

Recently, Poles have sometimes overlooked this simple truth. The Dalai Lama’s visit has been a great opportunity for returning to this kind of reflection. For those who tend to be forgetful, the Tibetan leader, in a newspaper article from 2007, offered a universal reminder: “Brute force can never subdue the basic human desire for freedom. [?]Freedom is the very source of creativity and human development. It is not enough, as communist systems assumed, to provide people with food, shelter and clothing. If we have these things but lack the precious air of liberty to sustain our deeper nature, we remain only half human.”