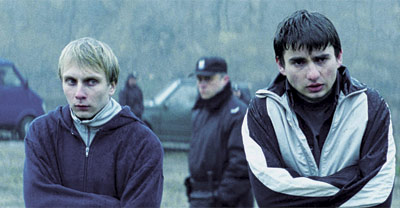 If the words “Three 650s bounced on some muslin” (Roger Deakins) look as strange as “dzdzownica” (Polish for earthworm), then it’s high time you treated yourself to the annual film festival in Łódż – Plus CamerImage – the most internationally renowned event dedicated to the art of cinematography. Last month, the Post took a gulp of Lodz air and submerged itself in the gloom and sparkle of the film fest. With lighting and camera workshops led by some of the world’s leading camera operators and D.O.P.s (directors of photography), plus screenings of some of the finest new and yet to be released films on the international scene, we had plenty to sink our teeth into. Adding extra punches of spice were the lively Q & A sessions with the creators of the films.

And today? Workshop or film?

The CamerImage programme is extensive, with various competitions and retrospectives running alongside each other, complemented by daily cinematography workshops. A prime example of the latter was Roger Deakins’ (Jarhead, The Big Lebowski, Kundun) marathon lighting workshop in the hangar-like space of Opus film studio. It’s in attending these sessions that one gets a glimpse of how lighting concepts develop from the abstract “I wanted it so that the image could break like a dry leaf,” to the concrete “take it 2K higher”. Deakins demonstrated differing ways of lighting an interior on a silent human guinea pig; but more important for the young cinematographers present was the direct contact with a professional working in their chosen field; someone breaking the rules as he went along.

The world is being documented

However tempting it was to live the whole week in the comfort of the Grand Theatre (Teatr Wielki) with its screenings from 10 am till past midnight and its convivial bars and restaurant, there was also Plus CamerImage’s parallel documentary festival just a short stroll away at Łódż Dom Kultury (Łódż Cultural Centre). Over 50 films were being screened, including Stranded, Gonzalo Arijon’s feature documentary about the Uruguayan rugby team which crashed in the high Andes – several of the players managed to stay alive for 72 days without aid, but were forced into cannibalising the dead crash victims. There were also various mini-seasons, including a retrospective of Oscar-winning documentaries from 1941-1997, plus “And This is Poland” – Polish documentaries made over the last two years. With such a wide spectrum of choice, picking favourites is, well, impossible. That said, particularly rewarding was the slice-of-Lodz-life documentary by Svenjah Kluh, Life is a Long Lasting Day, shot in beautiful black and white 16mm by Anna Winkler. This gem showed how intimate and filmic documentaries can still be.

Who will win the Golden Tadpole?

Wednesday, as usual, saw the much-anticipated student film competition, and rarely will you get the chance to see student cinematography of such a high calibre. The short film is, like the short story, a respectable medium in itself, although one that is shamefully underappreciated. Perhaps it should be obligatory to watch a short film before every major feature. It would help people become aware of film language, whilst exposing creative talents who have little opportunity to show their work to the general public. For several hours we were given the chance to wander through these alternately shocking, curious and funny celluloid landscapes, all painstakingly, indeed lovingly, made.

The Laszlo Kovacs Student Award, aka The Golden Tadpole Plus Camerimage 2008, was granted to Belgian youngblood Aurelian Pechmeja, cinematographer of Dear Mom, to Read If I Don’t Wake Up. The Silver Tadpole went to Bartek Cierlica’s astounding The Gravediggers, whose clarity of image and atmospheric lighting pull you deep into another orbit: the violent, scarred world of civil war in the Balkans. His pictures connect the viewer both directly and organically to a tale that mixes the imaginary with the factual. He told the Krakow Post that two years ago he had been shooting material in the Balkan region and the idea for the film took shape. In such an unbelievable war he wanted to show the point of view of a person whom we should theoretically hate; both sides in war are somehow victims. Other student films worth noting were Echo (cinematography Malgorzata Szyzak, director Magnus von Horn), which guided us through the traumatised minds of two teenage murderers; Laundry by Michal Dzbal, which created the intriguing dream-world of a circus; and the experimentally shot film Birthday by Andrzej Król. Student day is something of a megathon and memories of specific films can tend to bleed into each other. That said, feeling tired and meditative is all part of the CamerImage experience. The shame is that these films are not more easily accessible once the festival is over (DVD releases anyone?).

“Slumdog” gets the Golden Frog

Cut back to the main competition and one could be forgiven for thinking that no new films are being made without guns blaring. Adrenaline-fuelling violence seems to be a big motivator on the screen these days, and our state of the art Dolby soundsystems amply demonstrate what bullets whistling overhead sound like. The Baader Meinhof Complex, The Changeling, Gomorrah, Slumdog Millionaire and especially The Elite Squad, all shared in the violence. At least the winner was a “happy ender,” which although bordering on the sentimental, never quite breached it. This film, Slumdog Millionaire, exudes warmth and humanity in a modern day fable of rags to riches in Mumbai, India. The Plus Camerimage 2008 Golden Frog went to its cinematographer, Anthony Dod Mantle. Also notable in the main feature festival were Blindness (Silver Frog winner), shot by César Charlone (who also filmed City Of God), and Clint Eastwood’s Changeling.

This year also gave us the chance to catch up with one of the unsung heroes of Polish cinema, Andrzej Zulawski. A retrospective that encompassed 13 of his films proved a tantalising discovery. Zulawski’s films border on the surreal and the magical, made with a self-reflexive passion. In the Q and A session, he told us that for him, “Film starts off where it is outside the norm. Normality in film means boredom.” But can we trust Zulawski’s assertion that “cinema is first and foremost a visual experience,” for isn’t this the very paradox of film-making? Image – or story? In the best films they are inseparable. What is woven within the dark fabric of the film negative is this very tension, the threads of the story embroidered over the canvas of the image which create the final pattern of the finished film. The great Polish director Andrzej Wajda expressed something similar on the CamerImage stage when presenting an award to Krystina Janda, who was accepting on behalf of her deceased husband, cinematographer Edward Klosinski. Wajda said, “all well photographed films are not good films, but all good films are well photographed.” Wajda also praised the Lodz film school as a place where directors, actors and cinematographers train in one place. The school turns cinematographers into artists and thus, he continued, a good cinematographer can also co-create a film.

Zulawski spoke critically about the self-censorship needed to get past the Polish Film Institute, the body that funds all major Polish productions. He also revealed something about his private beliefs: “I hate religions. The two great evils in the world are religion and colonialism. However, whilst being non-religious I still have a profound attachment to mythologies and it is easier to show what is good or bad if you enter into the system. I wanted, in portraying the monster in Possession, to show that there is truly something called Evil.” And certainly there is an evil presence in the film, a horror every bit as convincing as when Lynch tackles the subject.

Sir Alan Parker appeared in Lodz for the second time and picked up his lifetime achievement award for the director with unique visual sensitivity. There was a chance to review 12 of his films on the big screen, from Midnight Express through Birdy to Evita. During the Q & A session he gave a fascinating insight into over 30 years of film-making. His honest remarks about the importance of images added further fuel to the image/story debate: “I started as a writer, and so when writing scripts you have images in your head, although sometimes in the making of a film they change organically. I’ve been working with a cinematographer of a similar age and with similar tastes for many years: Michael Seresin, who is also a friend. And when you make a movie you need a friend. Film is creatively rewarding because it uses writing, the visual arts, the dramatic arts and sound. The beauty of film-making is the melding together of these elements.”

On Wednesday, Viggo Mortensen flew in from Hollywood for his award, although he was rather baffled about what he had done to achieve “Special Award to the Actor with Unique Visual Sensitivity.” He jested that it was probably about always being in focus. Nevertheless, he stuck around for his new film Good, in which he was very much in focus as a writer whose novel about euthanasia came to the attention of Hitler, much to the author’s later regret and chagrin.

There is something out of the ordinary about this festival, and the bemused foreigner may find some of the rituals hard to interpret. Who is the long-haired cowboy pacing the stage with a fair young lady before every film (this human non sequitur is in fact long-standing translator Michal Lonestar!) The aforementioned cowboy prompts spontaneous applause whenever he steps on stage. Likewise, applause erupts whenever the name of a cinematographer appears in the credits, or indeed when the Plus CameraImage logo pops up on the big screen. The message is clear: “We are young film-makers or film fans and give our undivided support to a festival which has helped put Łódż on the international map.”