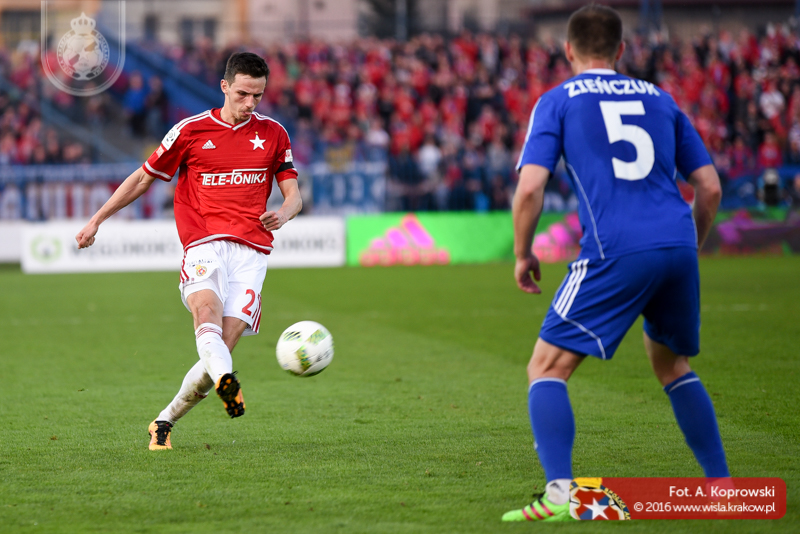 Only one game left before the end of the regular season. Six teams can still mathematically enter the Top Eight and qualify for the Championship Round (Playoffs): Podbeskidzie, Jagiellonia Białystok, Lechia Gdańsk, Korona Kielce, Nieciecza and… Wisła Kraków! A fierce battle ahead for the last Playoffs ticket.

What an end of season for the White Star, and what a revival after their poor series of 7 defeats in 9 games and a steep drop in the table all the way to the relegation zone.

While more and more fans started to picture Wisła in Second Division next season or at least battling against relegation, they proved everyone wrong. They are now #8 in the league table and have one foot in the Playoffs, but they will need to win their next and last game of the Regular season in order to validate their ticket.

Undefeated in their last five games, wins in a row with 12 goals scored. The conclusion is clear: Wisła is on fire—the Phoenix is rising from the ashes.

Their last game is a good summary of their recent form. They won 2-3 in Ruch Chorzów, one of the most difficult away games a team could play in the Ekstraklasa. Wisła created many goal chances and played clearly for the win, despite the ‘hostile’ environment (small and old stadium, hot fans, boiling atmosphere). Attacking as a team, but also defending as a team, they demonstrated great team spirit fighting all together to secure the win.

But since the season start the same mistakes have been repeated over and over again, and there is a defensive issue: Wisła is conceding too many avoidable goals, and their last clean sheet was in October 2015!

The highlight of the game was surely Michal Miskiewicz’s performance and last minute miracle: the White Star goalkeeper stopped a penalty in the last minute of the game, saving three points for his side!

A real morale boost and motivation factor before their last game on Saturday, in Krakow against Zagłębie Lubin, the current league #6. A must-win game for Wisła if they want to offer the Playoffs to their deserving fans, and exciting games ahead.

While one Krakow team is flying, the other one is struggling. The oldest football club in Poland is still looking for its First Round form. The current #3 in the league only managed to win two games in 2016 (in 9 games) and lost too many points along the way. Current leaders Legia Warszawa and Piast Gliwice are now 14 and 10 pts clear from Cracovia in the Ekstraklasa League Table. Meanwhile Pogoń Szczecin, Zagłębie Lubin, and Lech Poznań are only a few points behind.

With 4 games in a row without a win, their last game is also reflective of their current form: 0-0 at home against Górnik Łęczna, the modest second last in the league. However, Cracovia created an incredible amount of goal chances but were not able to score. Lack of offensive efficiency, but also defensively as the visitors were very close to scoring. Górnik Łęczna are certainly happy with this draw, whilc the ‘Pasy’ will need to show much better things before the Playoffs where they will face the seven best teams of Ekstraklasa.

Saturday’s game against Śląsk Wrocław will also be a good test for them, but a tough game, away, against a team battling to leave the red zone.