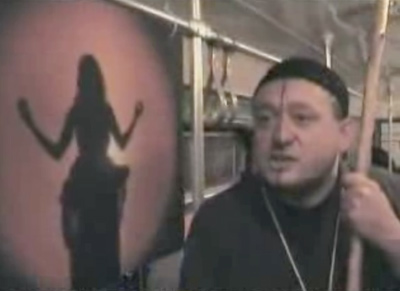 An annual effort to promote religious tolerance embarked on a novel promotion this year: a Krakow city tram.

Organisers of the annual “Bridges to Tolerance” conference hired a city tram in early December to circle the Planty, with actors from the On Off Company portraying people of various beliefs, and offering information for visitors.

About 500 people visited the tram over the three hours it circled the city centre. The U.S. consulate, other diplomatic missions and Tischner University organised and sponsored the conference and student seminars as a way to bring people together to talk. It started after the terrorist attacks on the United States on September 11, 2001.

“I hope it was a fun way to encourage tolerance and discussion,” Anne Hall, the American consul in Krakow, told attendees of the opening session at this year’s conference.

Hall stressed the need for people of various religious and political opinions to come together to talk about cooperation in public policies, noting that December 10th was the anniversary of the United Nations Declaration of Human Rights. Articles 18 and 19 of the Declaration specifically call for freedom to exercise religion and express opinion.

This year’s conference focused on the roles religion plays in the public arena, with particular attention to fundamentalism. While religious fundamentalism in the Middle East drew plenty of attention, there were also discussions about religion and the roles it plays in public policy in other societies, including the United States and Poland.

Clyde Wilcox, an American professor from Georgetown University, used quotes and images from the recent U.S. presidential campaigns to highlight the roles conservative Christians played in vying for and receiving attention from one of the major candidates, John McCain.

Wilcox pointed to McCain’s choice of Sarah Palin as his vice-presidential candidate as evidence of the influence religious conservative voters had in the recent election. The victory of McCain’s rival, Barack Obama, was attributed to the many other issues of the day, from the economy to the war in Iraq, as well as Obama’s more moderate religious views, which tempered the effect of the Christian conservatives.

In a nod to his audience, Wilcox noted what has been an interesting follow-up to the election: the reaction of American Catholics to Obama’s victory. While the majority of American Catholics appeared to vote for Obama, some priests have interpreted their vote for the man who supports abortion rights as a sin and are denying them the sacrament. There has been no official word from Rome on this interpretation.

Meanwhile, in Poland, Catholics form 95 percent of the population, with about half of them active in the Church, said Professor Miros?awa Grabowska of the University of Warsaw.

Grabowska, who is also director of CBOS, the Polish Public Opinion Research Centre, discussed the effect on Polish Politics of Radio Maryja and its listeners. The radio service, which also has a television component (TRWM), is often cited as a similar political force as the Christian conservatives in America.

Despite the impression that many Poles tune in, Grabowska said there are only about two to four million listeners, whom she labelled not as fundamentalist but “right-wing.” She said that Radio Maryja’s listeners are devout followers and are very reliable come election time, composing a key block for some politicians and a high hurdle to clear for others.

In recent elections, however, Grabowska said younger and more educated voters have countered Radio Maryja listeners and the next major elections will be a test of the staying power of the radio service and its followers.

While Radio Maryja, the Catholic Church and other influences on public policy are well known, what effects such an overwhelming majority has on atheists or people of different faiths is harder to clarify, but there is some evidence of bias against non-Catholics.

A poll released in May 2007 by the Public Opinion Research Centre found that 40 percent of those surveyed had heard offensive statements about someone’s race, religion, ethnicity or similar categories. Of the respondents who witnessed such statements, about half reported slurs including a reference to someone’s religion or lack of religion.

One of the hottest political topics this year in Poland, besides abortion, has been bioethics. Part of the conference was devoted to what role religion should play in shaping public policy about scientific research and practical applications of the use of human cells or body parts.

The conference and outreach efforts such as the Tolerance Tram are intended to encourage a “fruitful and peaceful dialogue,” said Iwona Sadecka, the public affairs advisor at the American consulate.

“With many Poles going abroad and a dynamic tourism [industry at home], it’s good to get to know other cultures and religions,” she said.