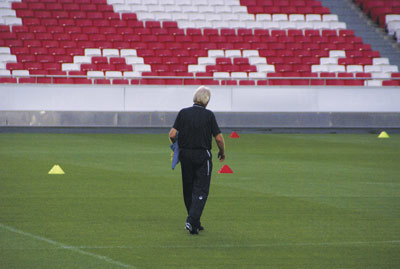 Once again, Polish football grabbed headlines for all the wrong reasons as a tumultuous year for the country’s national sport drew to a close.

News of a supposed conflict between national team coach, Leo Beenhakker, and the newly elected president of the Polish FA (PZPN), Grzegorz Lato, led to widespread media speculation that Beenhakker’s work in Poland was coming to an end.

While the veteran coach has been quick to refute claims that he will be resigning, there is little doubt that the former Real Madrid and Ajax Amsterdam boss is becoming increasingly disgruntled with what has clearly become a fractured working relationship with the PZPN’s new board.

In an interview with Dutch broadcaster RTV Rijnmond, Beenhakker highlighted his obvious distaste for the internal politics within the federation.

“I must admit that I don’t have an easy task at the moment,” a visibly annoyed Beenhakker told RTV. “Rather than moving forward, the Polish FA are looking to fall back on the past.”

“I am 66 years old and I don’t feel much like being annoyed all the time,” he added.

Beenhakker’s comments were quickly interpreted by the Dutch and Polish media as a sign of an imminent resignation from a reasonably successful stint as national team coach, which began in July 2006.

His obvious discontent has added yet another sour note to a tumultuous year for Polish football, marred by an enduring corruption scandal and a disastrous Euro 2008 campaign in Austria and Switzerland, where Poland scored only one goal and finished last in their group. A government suspension of the PZPN in October also led to subsequent threats of a FIFA ban and cast fresh shadows over the country’s stuttering progress to co-host Euro 2012 with neighbouring Ukraine.

To top things off, at the end of 2008, speculation grew rife over the alleged rift between Beenhakker and Lato.

One of the outstanding players in Poland’s football history and top scorer in the 1974 World Cup, Lato was voted president of the PZPN in an October election that was called to avoid FIFA sanctions, after the previous board was suspended following a motion from Warsaw‘s sport ministry.

Upon taking on the role, Lato stated that his new administration would conduct “an overdue analysis” of the failed Euro 2008 campaign. Beenhakker has since been asked by the PZPN management board to provide a report on the tournament, something seen by many as a sign that a direct review of his position will take place.

However, both have played down any talk of a conflict.

Following his comments to RTV, Beenhakker, whose current contract with the PZPN runs until November 2009, dismissed suggestions he will be resigning. “I don’t have any problems with the new chairman of the PZPN, and I’m certainly not considering resigning because of him,” he told Polish daily Dziennik.

However, the Dutchman did concede that his working situation in Poland has deteriorated after the previous PZPN boss, Michal Listkiewicz, was forced to resign following his administration’s failure to combat a massive corruption scandal that began in 2005.

“Work is no longer as smooth,” he told Dziennik. “But I can’t blame Grzegorz Lato.”

While admitting to being “taken aback” by Beenhakker’s comments to the Dutch media, Lato was quoted in Polish newspapers as describing their relationship as “very good.”

“I recently talked to Beenhakker and he seemed to be happy with our work together,” he said.