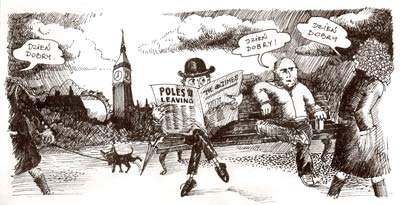 As I observe the desperate propaganda campaign and constant speculations of the press in Britain about the return of Poles to their homeland, I begin to wonder who is going back and to what?

We left, in many cases, from small rooms in our parents’ homes, from rented flats or student residence halls. We abandoned part-time jobs or poorly paid, but stable positions, which allowed a relatively decent life, albeit from one pay-cheque to another. Suddenly it became apparent that everything that we had could be contained in a suitcase, a backpack and the trunk of a car…

Here, if we work hard and diligently, London rewards us with enough money to methodically realise our dreams.

I was in Poland recently and indeed, the façade has become nicer. Thanks to funding from the European Union, our country has begun to resemble Western Europe. I asked some friends, however, how they were living. “Just like this. It is better,” I hear. Their salary increased from 1,300 zlotys to 1,500 zlotys, and if nightshifts are included, up to 1,800 zlotys. Their little Fiat has been replaced with a second-hand Audi, imported from Germany. It is possible, step by step, to buy furniture and home appliances, or even once in a lifetime to afford a trip to Turkey or Tunisia.

The average national salary is a pitiful sight though. The more so because it includes earnings of CEOs of companies, MPs and the grossly overgrown cadre of directors at various levels of the public service sector, living safely at the expense of the taxpayers. A saleswoman, a postman or a factory worker can still only dream about the 2,000 zloty [per month] salary ceiling.

I went to several shops and looked at the prices. I was constantly thinking how on earth are these people able to live normally? My pocket money, more or less equivalent to the average national income, and meant to last the entire visit, disappeared in the blink of an eye. My suitcase, meanwhile, had not grown any heavier with new purchases.

But let’s return to our Polish community in London. In recent weeks, I observed many returns, such as students going back to schools and universities. If someone wants to call it a wave, that’s fine. One can then also call a wave the thousands of relatives who came to Britain for the summer and are now going back.
I wonder, however, what the rest is doing. Packing? Leaving their homes and jobs? Are fleets of buses departing from Victoria station daily? Are ferry boats sinking from the excess of cars with Polish license plates heading east? Are squadrons of cheap Boeing planes flying in one direction only?

So London is supposedly emptying, but nothing is happening in my neighbourhood. Life is following its usual course. If no one managed to count us, Poles, then how could they estimate that our numbers are decreasing or have already decreased? Statistically, it is a complete falsehood.

I know many people who still work illegally, are not registered anywhere and have no intention of changing their status. I know many self-employed individuals, whom the Home Office did not register. I know many housewives, who came here only to cook for their husbands or look after their grandchildren.

I decided to do a bit of research hoping that, in the end, it would clear my doubts.

I began at the house where I live. As it turned out, one of the six people living there plans to return to Poland because they are tired of their current job and unable to find a different one, in spite of a diligent search. They are unsure, however, when they will actually leave Britain. I extended my amateur research to several acquaintances. Their concerns revolved around loans, engagements of all kinds, contracts, kids at school and so on. They have become so involved in life in Britain that they considered my enquiry ridiculous.

I work at a public place that sees about a hundred Poles on a daily basis. I questioned several dozen people about whether they planned to leave Britain. A few mentioned that the weather here is depressing, that there is too much congestion in London, so perhaps some day… The rest are staying here.

In the end, I went to my local supermarket. Polish newspapers disappear quickly, just like beer, Pudliszki canned foods and bread. Who buys all that? Space aliens?

On my way back home, I examined the recent past. Over the last three years, only about seven people from my circle of acquaintances went back to Poland. Among them were those who couldn’t find a good job and those who simply let opportunities go by. Some of them lost their work, fell into debt and became alcoholics. They left, to salvage what was left of their life.

It seems that some people come, some people go. There can no longer be any talk about Poles crossing the English Channel. Logic suggests that the tendency may (and even should) begin to reverse. Yet still, hardly a day goes by without someone asking me for a job, a room, or how to activate an O2 telephone package. There are still many daredevils, especially among young people. They pack their belongings and come to Britain because their friends made it here, because, say, their brother-in-law is building a house from the pounds he earned here, or because half of their neighbours are living abroad…

Those who built their lives or businesses in Britain are not going anywhere, while those who failed will probably go back. Life goes on; sometimes it is trivial, sometimes stormy.

I wish (I suspect I’m not the only one) that the local Polish press came closer to those of us who are staying here, instead of searching for topics such as “the Poles’ great return.” The next opportunity for a tsunami in a glass will come already in the New Year. Now that will be a wave!