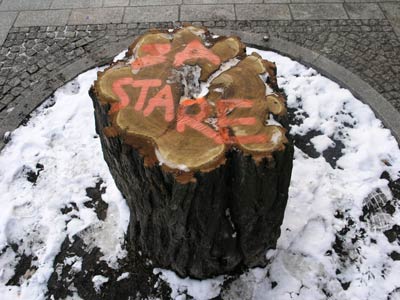 Amidst all the construction taking place on the Market Square between Szczepanska and sw. Anny streets it may have been easy to miss the fact that in one day in late November all of the trees on that side of the square disappeared. In fact, many people may have missed this event completely as within a few days the 14 old trees had been replaced by fresh young specimens from a German arboretum.

The Zarzad Infrastruktury Komunalnej i Transportu w Krakowie (ZIKiT, or the Krakow Board of Communal Infrastructure and Transport) is the body responsible for the trees’ removal. According to ZIKiT’s website, the current tree removal was simply the continuation of a “tree exchange” on the Market Square begun in 2006. “The replacement of the crop of trees was necessary due to the medical status of these trees,” states the website. The trees’ removal had also been approved by the Malopolska Voivodship’s Conservator of Monuments.

“In the expert analysis it was unequivocally stated that the trees are in such a state, that the best solution will be their removal. The entire project was planned two years ago,” stated Jan Janczykowski, the Malopolska Conservator of Monuments. The analysis showed that the treetops were only retaining 30-50 percent of their branches. Holes and scars were visible on the tree trunks. Due to physiological weakening, a danger of breakage had emerged.

But many Cracovians are sceptical about whether the trees’ removal was actually necessary. The chairman of the Saving Krakow Citizens’ Committee, Mikolaj Kornecki, told Gazeta Wyborcza: “Granted, the wood is worm-eaten in the middle, it’s crumbling. I saw only one other like this. The rest, please notice, is healthy.”

The swift extraction of the old trees came as a shock to Cracovians who were suddenly confronted by a series of stumps. Just a few days before the trees were cut down, they had been covered in the first snow of this winter, lending an extra dash of beauty to the barren branches. “Half of the Market Square [now] looks strange. These trees held lights every year before Christmas, and now it will simply be gloomy,” commented local kiosk keeper Malgorzata Kozak, as reported by Gazeta Wyborcza.

The removal even sparked a protest by an unknown activist. Shortly after the trees had been cut down and removed, someone spray-painted each stump in bright orange paint. The spontaneous graffiti marked each tree with declarations such as “too old,” “too fat,” “too thin,” “too crooked,” “too many branches,” “blocks the view of the kiosk.”

While young trees have now replaced the old, and the hubbub of the Christmas Market provides a distraction from the sudden change, nonetheless it’s hard to imagine the Market Square looking as festive this holiday season without the customary lights hanging on high from the ancient branches.