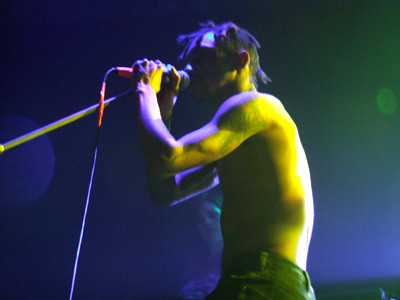 In late November, overnight, horizontally falling blizzards gave us an idiosyncratic rendering of “In the Bleak Midwinter,” and the only relief came in the form of Tricky, all the way from sunny Bristol.

What to make of Tricky? If you don’t know him, he’s an inconsistently brilliant, angular looking musician who has collaborated with Björk, Neneh Cherry, Alison Goldfrapp, P.J. Harvey, Terry Hall (The Specials), Cypress Hill, Red Hot Chili Peppers etc. A major figure in a tweaked, transposed, sampladelic evolution in music that’s been dubbed by journos “the Bristol Sound” or trip-hop.

A brief overview for the uninitiated: a multicultural city (Bristol), not far from Shirley Bassey’s birthplace in Cardiff, Wales (also a haunt of seafaring Jamaican pirates [um..this might not be true]), spawns punk-funk in the chaotic, improvised form of the iconoclastic Pop Group, circa 1979. They in turn spawn other groups and we have a fecund, soggy mattress of a scene with Massive Attack, Smith and Mighty, Rig Rig and Panic, Sharon Nelson, Nellee Hooper/ Björk collaboration (Debut), Pigbag and Portishead all taking part. Then Tricky subdivided from Massive Attack and went solo, or rather collaborative, since he is a self-confessed bad singer. Nevertheless, despite its obvious predecessors, Tricky’s 1995 album Maxinquaye was a definite phenomenon, a new sound ? funk, reggae, and hip-hop slowed down and blunted into a sensuous prison song ballads or, in covering “Black Steel,” giving us a kind of neo hip-hop punk.

Recently, he’s been touring Europe with new album Knowles West Boy, a startling return to form, and now, in a snow-swept Krakow, we have Tricky punking and skanking it up for Polska. He brought his fractured soul-music to Klub Studio, which has lately hosted some of the more interesting musical events in town, including Jamaican reggae superstar Horace Andy, The Futureheads, New Yorkers Hercules and Love Affair, and Ladytron. But something tonight was amiss, the vibes weren’t flowing, and so 30 minutes into a lacklustre set (despite old faves like “Pumpkin” and “Black Steel”) he said “goodnight.”

Or so it seemed. For by the time I’d figured what else I could have done with my 110 zloty, he had whammed his way back on stage, supercharged his act and set it on fire. I no longer waited for the slow numbers ? the numbed beats and ultramodern, velvet vocals of “Pumpkin;” instead I wanted the aggression, the energy to die for. The consensus after the gig was that the fake farewells were stunts to grab our attention. Sure enough, they worked, for from then on Tricky had us hooked.

The new songs like “Joseph” and the grimey pounding beat of “Veronika” are perfectly suited to live performance, with their edgy rhythms and gritty guitar licks, complemented by Tricky leaping around the stage like a deranged shaman, scream-chanting with echo fully on: “Breathe, breathe…eathe…eathe.” With another song he retreats to the back, hunched by the keyboard player – possibly puffing on weed – allowing co-vocalist Francesca to mobilise her ghostly, statuesque presence and take up the reins. On slower, hypnotic songs like the classic “Overcome” (Tricky’s take on Massive Attack’s “Karmacoma”) or “Makes Me Wanna Die,” Francesca smoothly guides her voice through the ocean of sound and into our minds.

At times, Tricky can sound like he’s genuinely suffering. When he screams for minutes on end “She left….now she’s ga-a-w-n…” (“Joseph”) his anguish is believable, and physical. At the same time, considering the way he moves on stage, it is somehow a classic rock and roll performance: shirtless, an arching back, sinuous body, hugging the mike. And a couple of times he ditched the croaky whisper and possessed, toneless howl for a singing voice reminiscent of bluesman Screaming Jay Hawkins.

The last few songs in a second encore were even more highly fuelled and got the crowd throwing their arms into the air, inching us towards that abstract, surreal, timeless place that borders on possession.

Never one to be conventional, Tricky’s last choice of song was rather shocking in that it had me humming a Motorhead song on my way home – but “Ace of Spades” is, after all, such a catchy, timeless tune. The spectral Francesca made it her own in a lively, throaty, bluesy voice – I closed my eyes and briefly caught a glimpse of her gleaming, silver Harley Davidson motorbike as she sped away on vocal-wheels-of-steel, through icy basslines and snowy power guitar. Tricky done good.