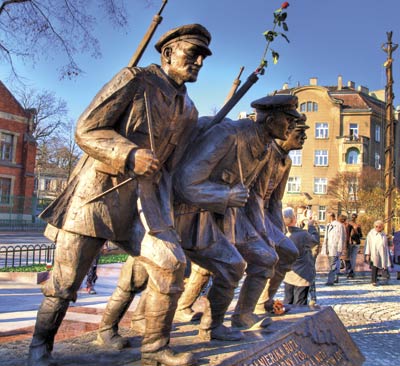 On National Independence Day, Krakow was granted two new monuments. Shortly afterward, it turned out that one of them may be a copy of a monument in Kielce, a city north of Krakow.

The November 11th National Independence Day is always associated with Marshal Jozef Pilsudski, the key figure in the regaining of Polish independence in 1918 and the country’s most influential politician throughout the 1920s. Krakow’s Mayor, Jacek Majchrowski, unveiled a monument to him during this year’s 90th anniversary celebrations. Appropriately enough. the statue stands on a street named after the great leader.

An accompanying monument, the so-called “four legionnaires”, shows marching soldiers sculpted in tribute to the men of the Polish Legions, a military unit of 144 fighters that was formed in Krakow during the First World War by Pilsudski.

Both the marshal’s and the soldiers’ statues were designed and made by Czeslaw Dzwigaj, the author of numerous controversial works of art found in Krakow. Local artists have accused the sculptor of producing mediocre art and lacking originality, yet his position is considered influential ? Dzwigaj is the chairman of the Fowler Guild, an organisation of historical provenence and a bastion of Krakow’s bourgeois traditions. The fraternity was indeed the sponsor of the Pi?lsudski statue, with the “Legionnaires” sculpture sponsored by the city.

The issue of plagiarism arose when the Gazeta Wyborcza daily compared Dzwigaj’s legionnaires with a nearly identical piece by Jan Raszko, a sculptor who was a member of the original Polish Legions. Raszko’s “Four Legionnaires” were sculpted in 1917 and are located in Kielce. The soldiers in both monuments march, bend their knees and even look up in nearly the exact same way, though Dzwigaj’s version loses a lot in comparison.

The 88-year-old daughter of Jan Raszko, Danuta Bielecka, who is now the inheritor of the author’s rights, is appalled that her father’s name was not mentioned in the project, although she always agrees to requests of copying the legionnaires statue without claiming any royalties. “I just wish somebody had made an effort to ask me for permission. I would agree anyway,” she says.

However, Czeslaw Dzwigaj considers her opinion the “remarks of an elderly lady” that contradict the facts and claims that both pieces are distinctly different. His key argument is that soldiers had to have the same uniforms and had to march in fours.

That was enough for Krakow’s Internet forums to boil.

“That’s a scandal! Raszko’s author’s rights are above any doubt. This is a sheer theft and plagiarism,” writes user Dorota at www.forum.gazeta.pl.

“Dzwigaj’s ‘legionnaires’ look as if they were sneaking for beer to a nearby pub right under the marshal’s nose,” mocks stasieczek5.

“It’s a parody of the original, a huge kitsch,” comments Jan Polewka, a director and stage designer.

Professor Ewa Nowinska from the Intellectual Laws and Property Institute of the Jagiellonian University, an expert on intellectual property, points out the fact that the real soldiers didn’t necessarily have to march with their hands on their thighs, which is the most visible similarity to the Kielce monument. However, the legal court’s experts are the only ones who will be able to resolve this issue.