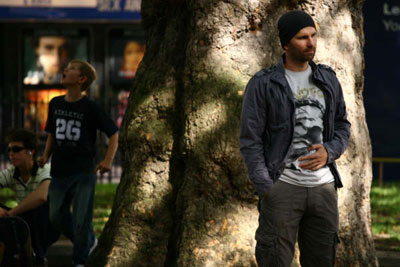 Let’s be honest; soap operas in Poland have never been much to shout about. Apart from stopping the surprisingly sharp-elbowed mohair-beret militia from roaming the streets in the evenings, the tacky Polish serial has always struggled behind other European countries in terms of quality. Surprising, given the high calibre of Polish filmmakers – the likes of which include prestigious names such as Polanski, Kieslowski and Wajda.

But since late October, the future of the Polish soap seems to have entered a renaissance with TVP launching Londynczycy, a big-budget series following the lives and fortunes of Poles who moved to London.

An expensive and hugely visible marketing campaign attracted nearly 6 million viewers for the premiere, and with a grand budget of 13.5 million zlotys (not to mention an impressive cast and crew), it appears the program’s makers have trail-blazed through Polish television’s old order like the proverbial bull in a china shop.

Clearly it’s big news, but what is it about Londynczycy that has audiences clamouring to their sofas every Thursday night? Lodz Film School graduate and director Greg Zglinski believes it’s the kaleidoscope of characters and their experiences that sets it apart from the rest.

“Londynczycy is like a mosaic – a collection of different stories,” he says. “We look at the emigration phenomenon from various angles: a young girl after her exams, a family with a child, a post-WW2 Polish émigré… it’s an attempt to show many sides of the story.”

Stories like Andrzej’s, a college drop-out who came to London with his childhood sweetheart in the hope of earning money for their wedding. But following a run of bad luck, he found London to be not the place he imagined.

“He comes from one of the smaller cities in Poland,” explains Leszek Zurek, who plays the character. “His father is gone, so he’s head of the family – and responsible for providing for his family. That’s what motivates him.”

“But everything fell apart in London,” he adds. “He was supposed to return to Poland with his girlfriend, but their relationship breaks down. Now he doesn’t know what to do.”

Certainly, the series looks slicker than anything else you’d find on Polish television, and with Piccadilly Circus, Notting Hill, and other flash locations giving it a glitzy feel, it’s easy to see why. But are stories like Andrzej’s representative of London’s Polonia, or just jazzed-up entertainment designed to hook audiences? Zglinski believes it to be a bit of both.

“The idea arose from the scriptwriters who were in London for a few weeks,” he explains. “They met with Poles, and heard various stories – so the program is inspired by real accounts.”

He continues: “We worked hard to make sure it wasn’t a typical soap but more like a drama, and that it was made to a good, professional standard. But it’s not a documentary, so it’s not real life. It’s a selection of stories that have been dramatised.”

The program seems to have divided opinion amongst viewers. A quick scan on Polish ex-patriot forums shows heavy criticism towards program-makers for portraying life in London as a struggle – with some accusing the show of anti-immigrant propaganda.

However, Zurek thinks the portrayal of the capital is honest, and exposes the turbulent nature of Europe’s most diverse city.

“It represents a true image of London, or rather, all sides: black and white, not only grey. It shows a cross-section of immigrant Polish society, and there are a lot of incidents as a result. It’s about how these two worlds collide.”

He continues: “These things really happen to some people, so it’s important to portray them. These are individuals that simply must figure out how to cope, and make the best out of a tricky situation.”

With high ratings, interest shown all over the world, and rumours of a potential deal with the BBC, the Londynczycy team have clearly raised the bar. This comes as no surprise to Zglinski, a former student of master storyteller Krzysztof Kieslowski, who believes the topical nature of Londynczycy makes it necessary viewing.

“The subject is certainly important,” he stresses. “To observe what happens to the people that left [Poland], and how it affects their lives – if they are coping, what they are going through – all these are real issues. It’s crucial to tell these stories because ultimately it shows how people adapt to a different world.”

Londynczycy airs Thursdays at 21:10 on TVP1.