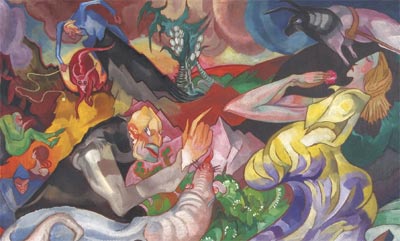 A mysterious postscript to the life of virtuoso polymath Stanislaw Ignacy Witkiewicz (1885-1939, a.k.a. Witkacy) is to be dramatised in a film by Polish director Jacek Koprowicz. An accomplished artist, novelist, metaphysician, narcotics buff and groundbreaking dramatist, the scope of Witkacy’s genius was scarcely recognised in his own lifetime. But in a startling tale of death-defying postcards, disappearing dentures and a macabre case of mistaken identity, Witkacy continues to confound critics from beyond the grave.

Witkacy’s ideas often verge on prophecy: long before the outbreak of World War II he’d formulated his views on the decline of Western civilisation, in what he saw as the descent of modern life into a mechanised, insect existence that stifled creativity and denied the individual. His raucous plays unravel at breakneck speed, steeped in satire and utilizing the absurd so far as possible in an attempt to knock the spectator out of apathy, and reawaken the “metaphysical feeling of strangeness” that is the primordial condition of every human being. Insatiability, Witkacy’s literary magnum opus, is a profoundly dense novel, evoking an apocalyptic invasion from the east, in a world spinning ineluctably into a morose mass of anodyne complicity – with plenty of sex, drugs and metaphysical mayhem along the way. He parodied what he perceived as the death of art by establishing the “S. I. Witkiewicz Portrait Painting Firm,” and annotated his creations with symbols denoting periods of relative abstinence or indulgence in cocaine, mescaline, peyote, nicotine and alcohol.

His worst fears began to materialise in the political unrest that spread across Europe in the 1930s. When the Nazis invaded Poland on 1 September 1939, a worn, creatively drained Witkacy fled for the mountains of the east, and on learning that the Red Army were advancing from Russia, he committed suicide.

Bizarrely, this didn’t mark the end of his correspondence. From 1950 onwards a series of postcards, evidently penned by Witkacy, turned up at the homes of former loves, Zuza and later Czeslawa Okninska. Moreover, just after the war, Okninska – who had eloped with Witkacy at the time of his death – picked up his new and presumed redundant dentures. Rumours emerged that his suicide had been fabricated and that Witkacy was alive and well. By 1968, even the Polish security service had picked up on the anomaly and tried to exploit his apparent resurrection to cover up the suspicious-looking suicide of political writer Jerzy Zawieyski.

It was later revealed that before his flight from the Nazis, in a stroke of mischievous foresight, Witkacy disseminated a number of envelopes among his confidantes, and solemnly requested that on a specified future date they post the contents.

The director’s fascination with Witkacy was roused in 1988 when, in a long overdue gesture of recognition, the Polish government arranged to have Wikacy’s remains exhumed from their resting place in the Ukraine, transferred to Zakopane, and given a state funeral before being interred at the family tomb. Soon after, the ceremony was exposed as a farce: officials had been duped; the remains were in fact those of an unknown Ukrainian woman. In a seeming act of ultimate defiance, Witkacy finally gave the slip to those that would vainly endeavour to pin him down.

The film will be titled Mistyfikacja (Mystification) – a reference to Witkacy’s death being somehow a subterfuge, reports the Polish daily Gazeta Wyborcza. Koprowicz is keen to talk in terms of “mythic reality” and a “lack” of reliable evidence upon which he feels free to elaborate: exactly where the facts end and hypotheses begin remains unclear, and perhaps that’s the point. In the atmosphere of suppression and mutual suspicion that permeated the communist era, it’s not difficult to imagine how Witkacy’s extraordinary legacy might have tumbled into talk of full-blown resurrection.

Mistyfikacja is due to begin production next year. In the meantime, intrigued readers can savour a fine array of Witkacy’s art in the permanent collection of the National Museum, Al. 3 Maja 1.