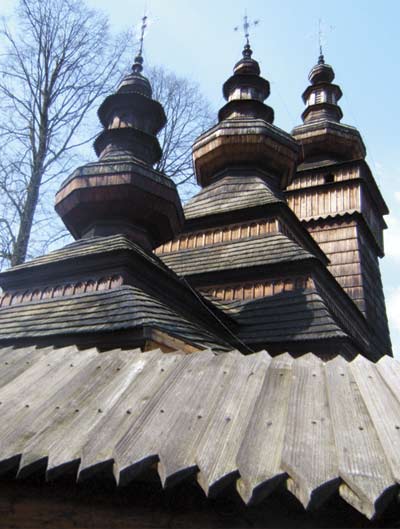 Like the delirious Dutchman Vincent van Gogh, Nikifor has joined a long line of ill-starred artists who barely scraped a penny while still alive, only to command staggering prices having kicked the bucket. To add insult to injury, the Polish painter must peer on from beyond the grave as sacks of cash are made on copies of his works, as today he’s one of the most widely faked artists on the market. Nikifor left no catalogue as such, just scattered scraps on cigarette cartons and the like – he painted on anything he could lay his hands on. Still, whilst scores of more successful, academy-educated artists are now consigned to oblivion, Nikifor has become a full-fledged legend.

There are plenty of lurid tales about Nikifor’s background – that his mother was a deaf-mute, and what’s more, a lady of the night. However, we do know that he was from a Lemko family. The Lemkos (Lemkowie in Polish) were highlanders of Ruthenian descent who lived on both sides of the Carpathians. Andy Warhol’s (or should we say Andrij Warhola’s) parents were Lemkos from the Slovakian side of the mountains.

Nikifor lived most of his life in the spa town of Krynica, but one of his most beloved subjects was the cerkiew. These Greek Catholic and Orthodox churches still endure, and combined with the dreamy beauty of the Carpathians themselves, they make a wander through the Lemko lands a bewitching experience.

Given the number of marauding armies that have raged through the region, it’s a wonder that any of the churches survived at all. As any conservator will confirm, a wooden cerkiew can burn down in five minutes flat. The First World War alone saw biblical clashes in the Carpathian foothills, with almost half a million casualties south of Tarnów. In the wake of the Second World War, the communist regime cleared the region of Lemkos in an attempt to flush out the remnants of the Ukrainian Insurgent Army. Nikifor himself was one of thousands resettled, although the plucky painter returned three times, and was eventually allowed to stay in Krynica.

It’s hard to imagine a structure that better complements its native landscape than the cerkiew. In fact, they don’t just seem to complement the terrain but to have actually grown out of the very soil. It?s as if some ancient Slavic saint had scattered a handful of seeds across the landscape, and up sprouted these bulbous marvels. As it was, churches were often founded on former pagan sites of worship, and the locations of the wooden churches tend to exude an otherworldly aura. Low wooden walls ring the buildings, and as you pass through the gates, there?s a palpable sense of entering another realm.

These days, stepping inside the churches can be tricky outside the allotted mass times, although they are certainly at their most evocative during services, when the heady mix of incense, music and archaic costumes transports the traveller. But either way, armed with a good map, drivers heading south of Gorlice will be privy to some of the most inspiring scenery in Poland. Let’s hope that Zakopane style overdevelopment never stretches this far.

For more information on the wooden churches of the Beskid Niski, the excellent website http//szlak.wrotamalopolski.pl comes in handy.