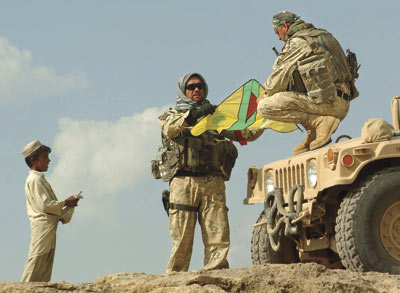 On the 4th of October in the Shiite province of Diwaniyah, Polish troops officially ended their mission in Iraq. After five years of military presence, Poland handed over the responsibility for security in the province to the Iraqis, and began withdrawing its soldiers to Poland. All of the 900 remaining troops should arrive back home by the end of October. Poland will leave 20 officers in Iraq within the framework of a NATO mission to provide training to Iraqi military personnel. During the five-year mission to Iraq, around 15,000 Polish soldiers were deployed there (starting from 2,500 and gradually falling to 900 troops); 22 of them lost their lives, and 70 were wounded. Upon the completion of the mission, Polish Defense Minister Bogdan Klich stated, “The current security situation remains stable and is better.” Reflecting that Poland was happy to have been part of the US-led coalition, Mr Klich reaffirmed the reasons behind Polish participation: “Solidarity among friends. That is why we participated in a difficult and dangerous mission in Iraq.”

However, the end of military engagement in Iraq does not mean that Poland will exit the second front of the so-called War on Terror in Afghanistan. On the contrary, Warsaw has just increased the level of forces in Afghanistan – where it trains Afghan soldiers and provides security – from 1,200 to 1,600. The withdrawal of soldiers from Iraq and the deployment of additional troops in Afghanistan seems to be part of a greater strategy already being implemented by the United States. Washington, after some arguable success with “the surge” in Iraq, is shifting its focus to the extremely unstable Afghanistan. Poland is following suit.

Poland’s pull-out of troops from Iraq should come as no surprise, as it had been announced by Prime Minister Donald Tusk’s government back in December 2007. But the Iraq campaign had proved controversial from the very outset, following the initial declaration of Polish participation by the left wing government of Leszek Miller in March of 2003. At first, over half of public opinion had backed the notion of Polish military involvement in Iraq. But after September 2003, opinion shifted markedly, and only 34 percent of the surveyed population supported Polish presence there, whereas approximately 60 percent were against it. Among Poles’ main concerns were fears that Poland?s military engagement in Iraq might provoke terrorist attacks on Polish territory, and doubts that the mission could bring any economic profits. Those worries were usually not shared by political elites in Warsaw, which mostly maintained support for the mission (this includes both former and current presidents, Aleksander Kwasniewski and Lech Kaczy?ski respectively).

It may be worth noting that Poland?s mission to Iraq was part of a greater project- the United States’ “War on Terror.” But unlike the case of the war in Afghanistan, the Iraq invasion met serious opposition amongst American allies. The transatlantic dispute over the Iraqi war severely damaged relations between the U.S. and some of its European partners (mainly France, Germany and Belgium). It also sparked arguments among European states, divided into “Old” and “New” Europe. Warsaw, being labelled as part of the latter category, was quick to embrace its role as an American ally and became a crucial ingredient of what Donald Rumsfeld (former U.S. Secretary of Defense) described as “the coalition of the willing.” In August 2003, the Polish government sent more than 2,000 soldiers, thus beginning its military presence in Iraq. The Polish contingent led a multinational division, which was responsible for one of the four districts of Iraq. Militarily, Polish participation may have not seemed to be extensive in numbers, but nevertheless, the political effects of these actions carried significant weight in Washington.

Madeleine Albright once asked Colin Powell a famous question: “What’s the point of having this superb military that you’re always talking about if we can’t use it?” By the same token, a question regarding Poland could be paraphrased as follows: “What’s the point of having an army if we don’t use it?” From this perspective it seems rather obvious that it is much better to be guarded by military forces experienced in warfare, than by those that have always been stationed in a garrison.

Therefore, there is no question that in military terms the Polish mission in Iraq has brought enormous experience – the Polish army learnt how to lead multinational forces in modern warfare and it experienced how to counter guerrilla warfare in both urban and rural surroundings. General (Ret.) Stanislaw Koziej, a former deputy defence minister, claims that commanding the multinational mission in Iraq gave Poland ?an experience that very few countries ?
other than superpowers – have.” Koziej argues that “up until 2003, Poland was treated more like a third- or fourth-tier country,” and now, its “voice is listened to more seriously” within NATO and the European Union. However, such improvements in standing are rather difficult to gauge.

Let us not forget though, that there has been a price for those lessons: 22 soldiers died in Iraq, almost 72 were wounded; not to mention the economic cost that Poland bore.

However, the non-military benefits of Poland’s mission in Iraq seem less ambiguous. In economic and political spheres the gains have not met high expectations. Neither contracts for reconstructing infrastructure, nor agreements in the oil or arms industries, cover the financial price of the mission – at least not so far. During the October ceremony in Diwaniyah, Minister Bogdan Klich said that there is still hope for building those economic ties. He underscored that “completing our mission doesn’t mean we finish our engagement with this country,” as Poland is still interested in “collaborating in the sphere of economics, finance and business with the hosts of this land.” For some critics of Polish engagement in Iraq, this statement might just have come three or four years too late.

It is of course a different matter whether the above-mentioned expectations had been realistic in the first place. Perhaps Poles should not anticipate anything “in return.” According to Max Boot’s condescending opinion, “it is dismaying that so many ordinary Poles do not get it,” as Poland in Iraq was “a leading practitioner of collective self-defence on the new frontlines of freedom, which are in the Middle East.” Mr. Boot, a neoconservative commentator, wrote those words in a piece for The Financial Times (December 2007), titled “It is in Warsaw’s Interest to be an Ally of America.” This title is hard to argue with. But speaking of interests, perhaps Mr. Boot might answer this inquiry: what real measurable national interest has Warsaw achieved due to its engagement in the military mission in Iraq? So far, Polish political elites have been unable to address this question.

The debate over the Iraq war should not overshadow discussion about the conflict the United States and its allies has been fighting since 2001 in Afghanistan. The current situation there is gravely unstable and the potential outcome of the conflict looks uncertain. General David Petraeus recently told the Washington Post that Afghanistan will probably become “the longest campaign of the long war.” We’d better take note, as Polish troops are destined to remain a part of this conflict.