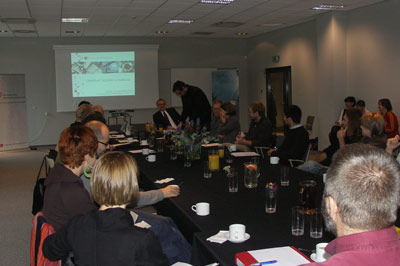 The creation of a new Design Centre in Krakow was announced on October 10th at a meeting at the Krakow Technology Park, which was attended by representatives of Krakow’s top educational institutions, technology companies and design agencies as well as officials responsible for Krakow’s development and its communal assets.

The aim of the meeting was to present the idea of the Design Centre to interested parties and to discuss how best to cooperate. The meeting aroused a lot of emotion, particularly when it came to trying to resolve where the Centre should be located and what it should actually do.

The Krakow Technology Park has already carried out market research as part of a pilot project that looked into industrial design in Ma?opolska. The aim of the research was to understand the depth of knowledge on the subject of industrial design and to assess to what extent design is considered to be a contributor to the success of Polish companies, as well as to explore how a Design Centre in Krakow would have to operate. It revealed substantial backing for the idea: almost 90 percent of the businesses surveyed expressed strong support for the creation of such an institution in Krakow. They also had clear ideas about what such a centre should do, including providing industrial design services at discounted rates, promoting the importance of industrial design, providing training and organising design competitions, and operating a database of designers and design agencies.

At the October meeting it was established that an agreement would be signed in the next month, with the goal of creating a network of cooperation between the key partners in the project. In addition, the designers themselves will create an outline of the goals and operations of the Centre. The Krakow City Authority also agreed to help find it a suitable home and the parties agreed to reconvene in November.

The benefits of introducing design to technology-based companies have been demonstrated in countries like the UK, where the government-funded Design Council’s “Humanising Technology” project brought small teams of experienced industrial and product designers in to work with small companies at earlier stages in the development process of their technology than they might otherwise have done. They found that by doing this, they allowed businesses to better connect technology to the needs of the people who would be using it, and increased their commercial viability. It may be obvious, but it happens a lot less frequently than one would imagine (just think of the Sinclair C5), and many technology-based businesses fail precisely because they focus on the technology and do not really understand the people they intend to serve. The Krakow Design Centre hopes to change that in the coming years.