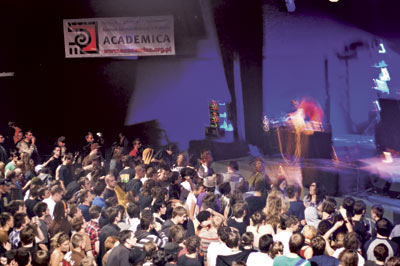 The Krakow Post team spent the week of 18-25th October running from venue to venue and special event to special event, trying to make the most of the Unsound experience. Some highlights below:

18 October:
My annual Unsound week began quite literally with a bang, as I braved the bridge over to Podgórze for Michael Nyman’s Sublime installation at Cricoteka. Three rooms displayed video projections of Nyman’s travels, including a looping video of a variety of guys banging away on metal objects in a factory, sounding like how I imagine the bells of a church would as they collapse during an earthquake. Slapping the term “opening” on this so-called event was pretty generous though, as not only was there a distinct lack of free food and drink (which is what makes most art actually palatable), but the artist himself was nowhere in sight. After this pointless visit to Podgórze, I headed back into Kazimierz for the opening solo piano concert by Nyman himself. Walking straight into the invitation-only gathering (though I did have an invitation I would have gladly flaunted), I was greeted by the always-welcome vision of a table covered in glasses of wine. The Galicia Jewish Museum was a surprisingly suitable venue for the concert, but Nyman still managed to pull off one of the most boring attempts at minimalism (despite having invented the term), plinking on his piano in a manner any pop star could probably outdo. After performing what I assume were his greatest hits, Nyman invited soprano Jolanta Kowalska on stage for a performance of the poetry of Tadeusz Rózewicz, and I have to admit her voice was incredibly powerful. An hour later Groupshow began their free eight-hour performance to a packed crowd, amusingly sitting and staring with great fascination at Warhol’s static Empire State Building film. Returning at around 3 am I was not shocked to see a practically empty room, with Empire now in night-time mode (i.e. invisible). Groupshow were very respectably still at it, their table littered in not only their many gadgets but now pizza and bottles of wine. The show unexpectedly ended one hour early, and I had the great privilege of completely embarrassing myself in front of the very talented and tired guys. May I never meet them again.

22 October:
Arriving quite late to the Manggha Centre, I was expecting to have missed both Mark Templeton and Autistic Daughters and be just in time for Australians The Necks. Luckily, the show had been delayed by nearly an hour (as were many of the Unsound concerts to follow), and I caught most of Autistic Daughters’ set. The threesome introduced an element of rock and even some pop-leaning vocals to an otherwise minimal night, with a bassist switching between upright and electric bass and a minimal percussion set armed by a drummer disposed to using brushes, all layered over with minimal guitar and rich, yearning vocals. Finally, The Necks took the stage, and proved that the 20+ minute song is back in fashion. Comprised of a grand piano, upright bass and percussion, the band explored the least melodic ways possible of playing their instruments, from single-fingered (seemingly random) keystrokes on piano, to a repetitive half-bowing, half-plucking sound on the bass; even the drummer spent a good 15 minutes playing just one cymbal. But as The Necks slowly but steadily built up the tension until the inevitable climax, I found myself enjoying this chance to crawl into my own head, and the music became a steady stream of white noise.

24 October:
Ears still bleeding from seeing post-rockers Caspian the night before (and hence having sadly missed the much quieter Max Richter), the suffering certainly didn?t end on Friday when not only were we forced to stand outside for almost an hour waiting to enter St. Catherine’s for Soundscapes 3, but once indoors, the Gothic church proved to be just as freezing cold. I just hoped the nearly four hours of hypothermia would be worth it, especially since I wouldn’t even be able to see cello-wielding genius Colleen. Replacement Rafael Anton Irissari started things off with a gentle set, playing ambient, pad-heavy music with a looped live piano. I think the next band, Pan American, may have put most people to sleep with their guitarscapes and barely audible drumming. Anyone daring to nod off would have had an incredibly rude awakening, with Ben Frost completely destroying the audience, the atmosphere, and nearly the entire church. His noisy soundscapes were absolutely jaw-dropping and he may have played the most physical set of live music I have ever experienced. The deep bass shook my body like a juddering plane, shooting from the speakers and disappearing far behind me at the other end of the hall. The piercing highs were so painful I had to pull my head away when Frost really cranked it up. I can?t exactly blame all the people that left in the middle of Frost?s set as frankly the whole experience was so evil-sounding I was terrified of looking around at the holy surroundings. I half-expected the enormous crucified Jesus hanging behind me to have turned into some sort of satanic demon with blood dripping onto the petrified audience below (I didn’t turn around to check, I was too scared). Congratulations to Unsound for organising this incredible combination of fear, architecture, and music.

25 October:
Unsound’s most eclectic bill began with posers Fuck Buttons, who performed the lamest and most amateur attempt at noise I?ve ever witnessed. Since when does blasting high decibel distortion and screaming (presumably about hating your mum) through a toy microphone display any sort of thought process or talent? An online biography states that Fuck Buttons “are attempting, and frequently achieving, some kind of transcendence between the listener and the Universe itself.” Let’s just hope it was a crazed fan that wrote that and not the artists themselves, or I?m officially embarrassed on their behalf. Amazingly the audience completely lapped up their 40 minute performance and I just want them all to know that all I feel for them is a massive amount of pity.

Next up, Xiu Xiu played their much anticipated set to an enraptured crowd. Using electric guitar, far more cymbals and other assorted percussion equipment than is healthy, flute, melodica, and of course singer Jamie Stewart’s quivering vocals, the band performed often extreme versions of their recorded songs. Most notable was a version of “Fabulous Muscles” that was so loud, violent and intense (as opposed to the acoustic record version), that I nearly didn’t recognise the song.

Boxcutter started the dubstep party with his glitchy interpretation of the genre, but the show stealers were by far Benga and Skream with their two and a half hour DJ set. Keeping the packed Studio crowd delirious with all the dubstep classics (including the annoyingly catchy “Night” by Benga & Coki), the DJs managed to blow a significant number of speakers at the club with their massive sound – surely the sign of a successful set.

As Pinch came on to end the party (and the festival) with more dubstep, a tired crowd began to filter out of the club, myself included – after all, I need to rest up for the next edition of Unsound; and if the trend continues, next year will be even bigger, louder, and better.