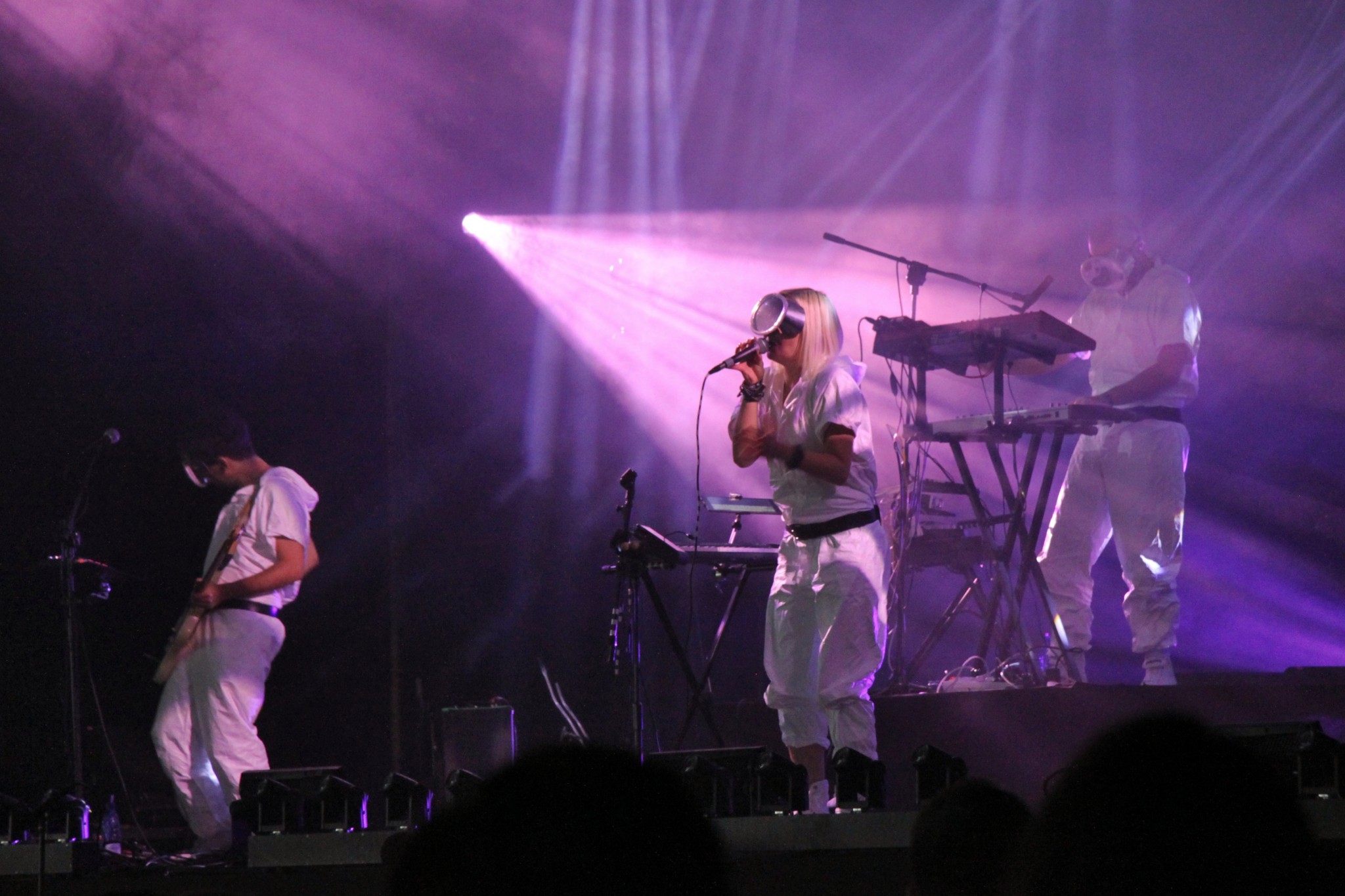 PROGGNOZY 24 with PROMISELAND / LIMIT DŻWIĘKU / MAKAR & CHILDREN OF THE CORN

Don’t be fooled by the budget conscious price – this is a rare occasion to see three very stylistically disparate artists with the potential to create a truly memorable night of music. MAKAR & CHILDREN OF THE CORN take their cues from the Americana of old-style Country & Western, the punch of old school Metal, and some Rockabilly twang – all with a barroom sensibility. They even do a cowpunk makeover of Motorhead’s “Ace Of Spades.”

The contrast with LIMIT DŻWIĘKU couldn’t be bigger; the latter is an instrumental fusion outfit with a bit of progressive rock thrown in. And wah-wahs and shredding guitar solos. Lots of them.

Both bands are quite good at what they do, but PROMISELAND are the reason to attend. Picture The Cure at their Distintegration-era moodiest, all driving rhythms, flanged bass and angular guitars, only with a gorgeous female voice to top it off, courtesy of Elżbieta Btachnia.

The songs capture the essence of the best Gothic music without resorting to cliché.

These three bands have tangible differences, BUT those distinctions should only serve to prevent the monotony that can sometimes set in during a long night. What they have in common is originality, and… the future.

No one really knows who BOKKA are – the online community boasts many educated guesses but the whole project is ‘shrouded in mystery’, as they like to say. Which usually is the kind of wacky contrived marketing tool BS that I wouldn’t bother with, but when the music sounds a bit like a synth-dream-pop Lana Del Ray, who really cares? Whether the band consists of some well known Polish pop stars exercising their inner tortured artists, or is perhaps a Daft Punk-wannabe stunt, or maybe even a sincere bid for anonymity –it just doesn’t matter. The songs are terrific!

And in case you’re wondering – they did their first tour in costumes with mirrors on their faces, so don’t expect any great reveal.

A very lovely night of acoustic music at a low price. HOLDÁRNYÉ are a Hungarian duo featuring acoustic and classical guitars. They say that their songs are inspired by seasons and nature and stuff like that, but since it’s all instrumental, it could just as well be about Einstein’s Theory Of Relativity or the 1939 World’s Fair, and who’d really know? But yeah, it does sound more like the nature thing…

VON ZACHINSKY is a singer/songwriter whose pretty voice and melodies belie the fact that his main inspiration is Nietzschean philosophy and it’s relationship to the decline of European culture. So, hey, you know…PARTY!

Here’s a pitch idea for your next meeting with a Hollywood executive; it’s 1981 in Warsaw, and four friends in high school decide to form a punk band. As you might imagine, this is a lot more complicated than it might be if they’d been from, say, New York or London. On top of that, they name the band SS-20, which is the United Nations code name for a particular Soviet ballistic missile. To put it mildly, Moscow (who, you might remember, ran things around here in those days), is NOT amused. The band are forced to change their name, eventually settling on DEZERTER, but the scrutiny is far from over. Their songs – even album titles – are subject to approval from the ruling regime, but in spite of that, or maybe partially because of it, their first EP sells an astounding 50,000 copies. The band eventually make the risky move of illegally recording and releasing their own stuff, and the buzz penetrates the Iron Curtain all the way to the west coast of America, where influential American punk magazine/record label MaximumRockAndRoll release a successful compilation DESPITE the band’s songs being sung entirely in Polish. The thing that matters most in the Punk Rock community – integrity – overshadows any language barriers and Dezerter’s Underground Out Of Poland album becomes an instant and alltime classic of the genre.

That’s just the beginning of their 35 year saga; they’ve had many career highs and lows, including the obligatory VH1 Behind The Music-styled tragedy –in this case, losing their charismatic original vocalist to a life of excess. Their concerts have often employed guerrilla theater tactics that included everything from the reading of Polish comic books to the use of masks and costumes. Their music has been used in many Polish films, they’ve been featured in a number of concert and documentary DVDs, and if 2014’s Większy zjada mniejszego ( “The Big Eats The Small” ) album is any indication, they’re not finished yet. Theirs’ is an important (albeit unknown in the English speaking world) part of rock history, and a film just waiting to be made. Who wouldn’t want to see that?

But they’re not the only ones deserving. All of the artists at this punk festival are Polish bands whose origins date back to the 1980’s, replete with deep discographies and colorful stories galore. Musically, they’re the children of the Dead Kennedys and the early U.S. hardcore movement, but they’ve outlasted them all. Living history.

This is a gathering for likeminded fans of the iconic group who’ve outlived all of their British synthpop brethren, survived addiction and changes in fashion, and can still easily fill stadiums the world over. They made some of the best records of the ’80s and ’90s, but have never given in to nostalgia, recording new albums (sometimes very good ones) and touring on a consistent basis throughout this century. Here’s a chance to celebrate with music, video, and drinks. Wear black.

And just to get you in the mood, one of their coolest songs…

It’s impossible to be certain, but Floyd may be the most fêted band in rock history. But the mistake most tribute bands make is treating it as an exact science – as if it were a classical recital – and ignoring the emotional component that is really where the soul of the music of Floyd resides. The purely intellectual approach to the tribute band works better for bands like Genesis, Yes, and Rush – PF were always all about feel.

Brit Floyd (also inexplicably known as The Australian Pink Floyd on occasion) are the undisputed kings, having become an arena act in their own right and utilizing much of the original band’s stage show and lights, but this homegrown version is on the upper end of the tribute band spectrum. A great chance to hear classic songs performed live by a very good band.