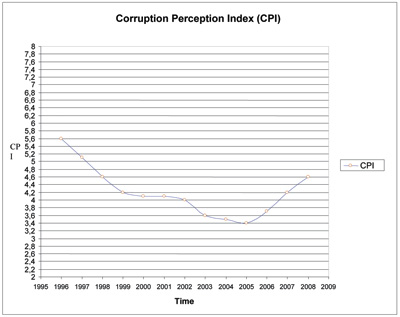 Transparency International has rated Poland 58th in its annual Corruption Perception Index. The CPI, first released in 1995, is the best known tool of the global organisation leading the fight against corruption. The index measures perceptions of corruption determined by different assessments and opinions, and ranges between 10 (highly clean) and 0 (highly corrupt).

Denmark, New Zealand and Sweden topped the list as the cleanest countries and shared the highest score at 9.3, followed by Singapore at 9.2. Somalia was ranked as the world’s most corrupt country (1.0). Myanmar, Iraq (1.3) and Haiti (1.4) were also at the end of the list.

It is very difficult to improve a CPI score over a short time period, as it is based on data primarily from the past two years, relating to perceptions that may have been formed even further in the past. This means that substantial changes in perceptions of corruption are only likely to emerge in the index over longer periods of time.

Poland has been improving steadily on the CPI ranking since 2005, when it scored 3.4. “This indicates that the perceived level of corruption is decreasing,” underlined Stanislaw Cichocki, executive director of Transparency International (TI) Poland, “however, our country still occupies one of the lowest positions among EU members. Only Romania (3.8) and Bulgaria (3.6) are behind Poland.”

According to TI, activities of the Central Anticorruption Bureau (CBA), which led to corruption being exposed during elections to the Sejm and the Senate, and corrupt officials in high places being accused, influenced Poland’s CPI rating improvement. However, it appears that Poland still has a long way to go in fighting corruption.