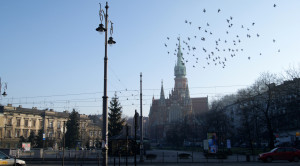 We are now closing in on World Youth Day, with 5 months to go. However, it is still not clear who will be in charge with controlling car and pedestrian movement in the city during the event. One company had taken on the job, but Krakow’s public transport company ZIKiT rejected their proposal once their 5 million PLN fee was revealed. At the moment the city is looking for a cheaper contractor for the event. [TVN 24]

Yesterday, a mysterious glittery dust covered the windows and windowsills of residents of Nowa Huta. Residents of Szkolne experienced a similar phenomenon. While there is currently no explanation for the substance, a similar event took place in Dąbrowa Górnicza last year. [Onet]

Flower shop taken down with force

After a long series conflicts between the city and a small Podgórze flower shop, the aforementioned shop was taken down today. The owner had continuously ignored requests to move his shop for duration of roadworks to be done on the square. The shop’s owner, Henryka Momot, plans on taking the case to court. [Love Krakow]