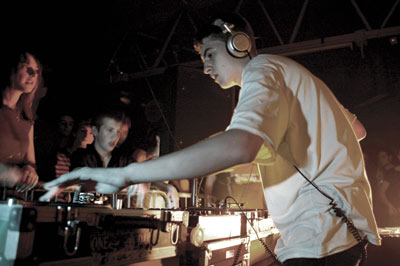 Krakow Post: Where/when did you get the idea for Unsound, and how did you get other people interested in the idea so you could pull it off?

Mat Schulz: The idea started in 2003, when there were really not many festivals presenting this kind of music in Poland. We saw a gap, and tried to fill it. Although electronic, experimental and club music have always been important in relation to the program, Unsound has always aimed to be diverse. From the very beginning, Unsound was also about trying to connect East and West Europe, via music, sound cultures and related visual arts. This idea remains.

KP: How is the list of performers decided each year?

MS: We listen to a lot of new music, and read everything from magazines like The Wire to blogs, searching for the latest tendencies in music. Then we try to make interesting connections between different genres. This means that we can put, for example, club music in the same program as work that could be described as post-classical. We also try to be as rigourous as possible with the program, so that while it contains some unexpected elements and combinations it still makes sense, according to its various parts, and overall. We take risks, selecting artists that may not be so well known here in Poland, which I hope makes our festival unique.

KP: Who are you looking forward to seeing the most at this year’s edition?

MS: Unsound this year has really grown, due to some strong financial support from the Krakow council. This means that there are so many great artists that it’s hard to pick one act. I’m really looking forward to the Warhol Series, showcasing early Warhol films with live music. We’ve wanted to invite Max Richter for a long time, and his show on the same night as Hauschka’s group should be wonderful, a combination of electronic and classical music. I think that Colleen, Pan American and Ben Frost, all playing in St. Katherine’s church, will be extremely memorable as much for the beautiful venue as the sounds. The dubstep night should be great, as this genre should really be heard in a club, with a sub bass system that you can feel physically, not only in your ears. The Necks are an amazing band from Australia. I could keep going, but if I do so I will probably recommend the entire program.

KP: Any surprises in store for this year?

MS: Unsound is all about trying to surprise, but if I have to select some particular acts, then I could start with Fuck Buttons. They’ve got a strong following in other countries, but not so much yet in Poland. They play a mix of noise, tribal rhythms and beats. I also think that Ben Frost may cause a bit of a sensation. I saw his show in Montreal at MUTEK festival, and it completely knocked me out. It was a mix of intricate, ambient electronics and often heavily distorted guitar. Considering this concert will take place in a gothic church, the impact should be even more powerful. If you?re not familiar with the more cutting edge forms of club music, then you should also head to Manggha on 24th October for Bruno Pronsato, Thomas Melchior, The Sight Below and others. This is really a world-class line up that may make you rethink preconceptions you have about club music. It would draw a huge crowd in Berlin or London, for example.

KP: What was the worst mishap from previous Unsounds?

MS: The worst mishap probably occurred during the first Unsound in 2003, in a club that shall remain nameless. Bouncers came on stage and pulled out the cables when the wonderful band Kammerflimmer Kollekteif was playing. They’d travelled a thousand kilometres by train to do that show, but the club and its regulars apparently found it too experimental. From that moment, things could only get better.

KP: Are you planning another edition of “Unsound Goes Tropical” or something like that in the future?

MS: We’ve been thinking about doing a New Year’s Eve party this year, actually, but it depends on getting the right venue, which is often the most difficult thing in Krakow.

KP: How does the Krakow edition differ from other cities, such as Lviv?

MS: Well, we haven’t done that much in Lviv yet. The main Unsound city outside Krakow is in Minsk, Belarus. It’s a place that is extremely isolated, and as a result audiences are so wildly enthusiastic that it is incredibly inspiring. Most of the artists dealing with this kind of music don’t expect to be swamped by fans requesting autographs on scraps of paper, but that’s what happens there. In September this year Unsound conducted a week of workshops and collaborative projects in Minsk, bringing together Belarus and Western European musicians. The results will be released on a free online CD to be released by the Scape record label in Berlin.

MS: The New York edition will take place in 2009 and will entail an expanded version of the Warhol and music programme, which will also feature at Unsound this year. The project is supported by both the Krakow and New York Goethe Institutes. The screening of Warhol’s Empire will take place in both Krakow and New York, an 8-hour film that will have a live soundtrack played by the Berlin band Groupshow. It’s a free event in Krakow at Unsound, on the 18th October, in the Galicia Jewish Museum.

KP: Do you see any possible stars emerging from the artists who have performed at Unsound?

MS: Stardom exists on different levels. I can’t see any new Madonnas emerging from the Unsound context, but that’s probably because the music is more challenging than most pop or rock. That said, there are many artists in the program this year that are already well known. Skream and Benga, for example, are undisputed stars of dubstep, Noze are stars of French tech house, Xiu Xiu for those into more alternate music, and Max Richter for anyone into post-classical. Artists like Pan American and Colleen are also internationally known. Michael Nyman could certainly be called a “star.” He’s very famous for his soundtracks for Peter Greenway and Jane Campion’s The Piano, as well as for being the musicologist who invented the phrase “minimalism” in the late 60s.

KP: I see that you’re co-operating with last.fm this year – is this due to their huge popularity in the Polish music scene?

MS: It’s true that last.fm is very popular in Poland, and I don’t think that the last.fm crew have a precise reason as to why this is. I wouldn’t say that’s the main reason we’re working with them, though. I’m generally an admirer of the site, and the way that it automatically connects users via their music taste. It also has a lot of potential in terms of thinking of new ways of distributing music. Apart from that, the last.fm crew played some DJ sets at a festival we are partners with, Futuresonic, in Manchester. They created their playlist by choosing songs from the music tastes of all those who’d signed up as attendees of Futuresonic on last.fm. I thought this was a really interesting idea, the way that it breaks down the normal barrier between performer and audience, and so we decided to bring a last.fm DJ team to Unsound. They’ll play free afternoon sets in Pauza on Friday 24th and Saturday 25th, but you have to sign up as an attendee of Unsound on last.fm to affect the playlist.

KP: Have any Polish artists really impressed at Unsound?

MS: I’m a big fan of Jacek Sienkiewicz, who I think is Poland’s best producer of minimal club music, and definitely has his own voice. He’ll also play this year, on the 24th in Manggha. I love Mitch & Mitch, especially live. The Complainer is always good fun. The VJ team Pussy Crew is also great. There’s a lot of excellent Polish music. This year, I’m really looking forward to seeing Male Instrumenty perform on the 21st; they usually use toys and gadgets to create their music, but this time will also play on huge self-made instruments. It should be a lot of fun.

KP: Do you have a musical background yourself or are you mainly a music fan?

MS: I play guitar and sing, but these days usually in my apartment. Apart from organising Unsound, I’m a writer.