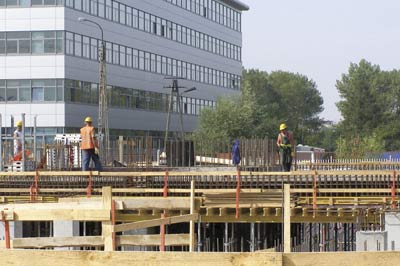 Mariusz Bart left his hometown near Wroclaw in 2004, lured to the UK by the opportunities it offered and the buying power of one pound to seven zlotys. This year he returned to Poland, disillusioned by the UK’s economic rot, a succession of shorter and shorter work “contracts” and the increased cost of living.

The UK’s economic boom of the last decade has come to a shuddering halt. With a crash in house prices and inflationary costs in food, energy and other staples, people are tightening their belts. Poles in minimum wage jobs are among those feeling the pinch of a consumer spending clampdown, while others employed in construction are bearing the brunt of a collapse in new building projects. With reports of Poles suffering increased hardship, it seems the honeymoon is over for Polish emigration to Britain.

Mariusz used to wait in west London to be picked up by building gangs for casual labouring work when he didn’t have anything more permanent, but during the past months even that source has dried up. He noted, “It definitely got a lot harder and things got a lot more expensive. It was harder to get casual work and without work it got lonely for me. When I had problems, there was no one who wanted to help.”

Providence Row, a homeless charity in East London, says that since last year the proportion of people it sees from Eastern Europe has grown to a third. This year they began working with Barka, a charity which helps Poles who have fallen into hardship and can’t find a job a way to return home to their families in Poland. Dagmara Walczyk from Barka stated, “Many may be unwilling to go back because they don?t have a home to return to or feel ashamed of coming back to their little communities. If they can’t or don’t want to return they can stay in one of our centres or other programmes depending on what their problems are.” Dagmara adds that Poles sometimes fall into the poverty trap because they are exploited by gangs, and there is a lack of support from the Polish government for migrants.

For those who decide to make the return journey, opportunities for work now seem brighter as the Polish economy grows, buoyed up by large-scale building projects such as the construction of stadiums for the 2012 Euro championships. In a global economy and a Europe without borders, it seems there will always be winners and losers among those brave enough to try to make a better future for themselves abroad. Speaking in the House of Commons, MP Stephen Pound, whose constituency in west London is home to one of the largest Polish communities in the UK, likened Polish emigrants to the British builders who were thrown on the dole in Margaret Thatcher’s recession hit eighties. Many of those Brits moved abroad to work in Germany. Pound termed these workers the “Auf Wiedersehen generation,”* the subtext being they will go wherever and whenever they have to to find work. No firm figures exist for the numbers of Polish people leaving the UK, but Krzysztof Treczynski, at the Polish Embassy in London, said: “There is an evident downward trend …and if you look at the numbers of air passengers flying both ways, the trend is decreasing.”

Ironically, there are many who forecast that the Polish exodus could affect the UK?s economy even more in the long term. Jan Mokrzycki, president of the Federation of Poles in Britain, said: “The first thing that’s been hit [by the UK recession] is the builders. There’s no doubt about it. Many aren’t prepared to wait for the construction boom that’s going to happen for the Olympics in 2012.” Poles worked on Heathrow Terminal 5 and there’s a worry that the big building projects of the Olympic Games will suffer because of a shortage of skilled Eastern European workers. The Polish plumber and his blue-collar colleagues shook up British builders with their work ethic, reliability and low costs. In anticipation of a dearth of bright, young Poles able to plaster a wall smoothly, industries, including the body in charge of the Olympics, are pouring money into training British workers in basic construction skills, such as how to use a digger.

But even for Poles who have good jobs these are unsettling times. Rafal Skarbek’s job as the head of the Polish Somerset Community Association, helping new arrivals find employment and accommodation, means he is well placed to see what the future could hold for Poles in Britain. He stated, “Now I am split [about] what I should do in the future. Should I stay, should I go back to Poland, why [do] I think like that? In Poland is all my family, past, and maybe future. [However,] I really do like England and I do love my job.” For Rafal, who is proud of his country and traditions, it’s politics and the way the country is run that deters him from returning: “I won’t feel optimistic about Poland until people in government change the way of communicating between themselves and society.”

If Poles, like Rafal, choose to stay in Britain there may be several reasons, including a feeling of integration and that whatever the current uncertainties, the UK still holds brighter possibilities for them. For others, like the clients at Barka, their dream of making it in Britain seems less than rosy.

*”Auf Wiedersehen, Pet” was a popular British comedy show about Britons working in Germany in the eighties.