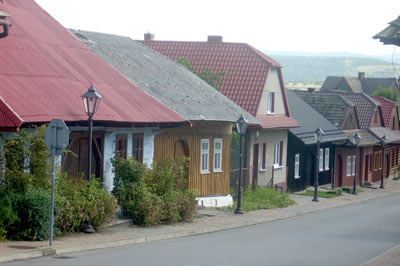 Driving about forty minutes southwest from Krakow will take you back in time. Lanckorona is a village located 500 metres above sea level, on a forested hill at the foot of medieval castle ruins, and to get there you need to take the one and only minibus line from Krakow, or simply jump in a car. Until 1934 the place was technically a city, and it has kept an urban layout, with a unique, sloping market square and streets branching in four directions. The market square looks like a miniature wooden city, with a mosaic of very old and sometimes comically small timber houses, still inhabited to this day. In one of the streets you can find an old bakery famous for its delicious bread and pastries made in an original, ceiling-high furnace. What’s great is you can knock at the door at any time and the bread will be there for you.

Due to an extraordinary stillness and “nothing to do” atmosphere, Lanckorona is a mecca for artists, who come there to rest and look for inspiration, as well as Cracovians coming to enjoy a weekend rest. Fortunately, the village has not turned into a tourist-cramped wooden Disneyland. Lanckorona may disappoint those searching for sensational discoveries and thrills, but it opens up for people who humbly approach new destinations and want to take in a place just as it is.

“This is a place in which you cannot do anything by force; here you can improve what already exists by bringing it out to light and dusting off its natural beauty,” says Zofia Oszacka, the borough leader of Lanckorona district. Oszacka has done much for the region: during the past six years of her governance, Lanckorona has won numerous awards for the best local government in Malopolska area and for the best use of EU grants.

At first glance Lanckorona is a forgotten old village where nothing happens ? but that?s all up to the visitor. It’s a potentially magical place, a background for romantic walks, long chats in a charming pavement cafe, learning handicraft or taking part in Lanckorona’s festivals – like the Angels in Town Festival, where children dress up as angels and distribute Christmas greetings and best wishes among the townspeople. There is also Romantic Lanckorona, a festival for lovers, and the Midsummer’s Eve Fair to mention a few.

Today, due to the enormous commitment of the borough leaders, the whole district – composed of five villages in total – is flourishing with investments. New anti-slide road reinforcements, pavements, and a revamped sewage system are now being developed, making the place visibly modernised. With a cash injection from the EU, local Lanckorona associations have started small businesses such as a souvenir shop, a cafe and a tour service company to help promote their beloved home and facilitate a stay in Lanckorona for future newcomers.