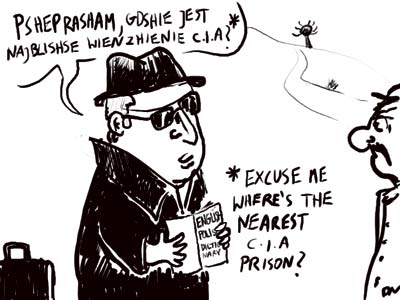 Accusations that Polish land and airspace were used for the transportation and detention of terrorist suspects have been re-ignited recently by a series of articles published last month in Gazeta Wyborcza.

The letter – promptly handed over to the public prosecutor’s office – triggered the re-opening of the investigation into the accusations that have proved to be a thorn in the side of consecutive Polish administrations.

The story first appeared nearly three years ago, when rumours that the CIA had held terror suspects in former Soviet European countries came to the surface. An article published by the Washington Post in November 2005 claimed that the CIA set up illegal facilities as part of a “covert prison system” following the 9/11 attacks in New York.

Although the paper refused to specify the countries implicated, it stated that in addition to Afghanistan, Thailand, and Guantánamo Bay, “several democracies in Eastern Europe” were involved in the CIA’s “unconventional war on terror.”

Shortly following the article’s publication, the US-based Human Rights Watch publicly said that, based on flight records and other evidence, Poland and Romania were the unidentified European countries. Tom Malinowski, the organisation’s advocacy director, claimed that during September 2003, a Boeing 737 leased by the CIA to transport prisoners departed from Kabul and landed at Szymany Airport, north-eastern Poland, before continuing its journey to Guantanamo Bay.

The European Commission swiftly moved to quell the furore and dismissed the report, saying they had no suspicions that the CIA was running secret detention centres in Europe, adding that there was no reason to question the denials by Poland and Romania. Later, however, after newspaper and media outlets across Europe carried out their own investigations, the EU’s hand was forced and official inquiries were launched.

Three reports materialised – the Council of Europe and the European Parliament’s in 2006, and later, in 2007, the European Commission’s – all of which, based on circumstantial evidence and anonymous sources, confirmed suspicions that Poland colluded with the U.S. government.

In September 2006, after many vehement denials by the Polish government – including rebukes by the then PM Kazimierz Marcinkiewicz, who declared the accusations to be “groundless slander” – President Bush admitted that the CIA did hold terrorist suspects at foreign locations and defended their use, saying that secret prisons, alternative interrogation methods and military tribunals were integral to keeping Americans safe. Once again, no specific countries were mentioned.

During the following months, the storm surrounding the accusations of illegal prisons based on Polish soil – to the relief of the Polish government – seemed to be subsiding. But following a damning article written by New York Times journalist Scott McShane, the issue has re-surfaced.

In the detailed report published in June, McShane claimed that the most important of the CIA’s “black sites” – a term used to describe Guantanamo-like interrogation facilities based in Europe — was located in Poland.

He also reiterated the accusation made by Malinowski years earlier, that the secret base was close to Szymany Airport. According to McShane, a military intelligence training centre in Stare Kiejkuty was used to detain, interrogate, and torture high-profile terrorist suspects, most notably Khalid Shaikh Mohammed, the man widely-recognised as the mastermind of the 9/11 attacks.

Furthermore, McShane said that Poland was chosen primarily because its intelligence agency was keen to co-operate, and because it had no cultural or religious links to Islamic fundamentalists such as Al-Qaeda. “Poland is the 51st state,” McShane was allegedly told. “Americans have no idea.”

Crucially, McShane says he gathered information from “credible” high-ranking CIA officials – claims that have been rebuked by Polish officials and scrutinised by media outlets across the country.

When asked by a journalist from Gazeta Wyborcza about the existence of the prisons following his acceptance of Giertych’s letter, Prime Minister Donald Tusk said, “I have nothing more to add.”

To this day, both former President Aleksander Kwasniewski and his successor Lech Kaczynski strongly deny any involvement in the scandal.