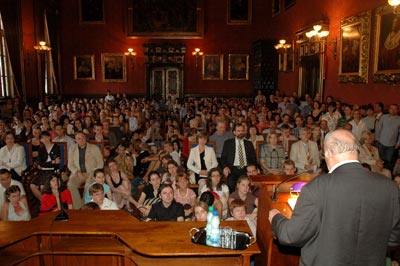 Aged 55, Edwiga Jacquin-Tkaczuk from Toulouse, France, is one of the 550 students who took part in this year’s edition of the Summer School of Polish Language, which has been held under the auspices of the Jagiellonian University for nearly 40 years. She took a three-week intensive course, as she wanted to be able to discover the country and communicate with her family living in Wielun, north of Krakow.

“I want to learn Polish, because Poland is my country,” says Edwiga.”I bought some books about Polish in France and wanted to learn it on my own, but I have no one to talk to and Polish grammar is so difficult. After the course I know all about the aspects and the cases and I can continue to teach myself,” she laughs. In the future Edwiga wants to be able to read in Polish and spend her vacations here.

With her Polish roots Edwiga is, however, in the minority. According to Piotr Horbatowski, the director of the School of Polish Language and Culture at the Jagiellonian, the 500-700 participants every year come from 50 different countries on average, and are simply interested in the language for personal or professional reasons, with Americans being the most numerous group among them. Young people make up the majority of the students, however the age range is vast ? from 18 years, the minimum age for the course, up to even 84 years.

“We have a group of elder people, whom we call ‘regular customers.’ One gentleman even claims to have taken part in the courses 20 times. With some people you can really see the progress of learning, however some of them remain at the same language level for years,” says Horbatowski.

The Summer School of Polish Language began in 1969 as an initiative of the Polish language faculty’s Prof. Wladyslaw Miodunka, who wanted the teaching of Polish as a foreign language to become a completely independent field. The courses began with enormous help of the Kosciuszko Foundation, which sent the first group of American students with Polish roots to the programme, and has sent a large group of participants – over 100 people every year – ever since. There are also translators from the EU, people who are connected with business in Poland and need the language in their work, students who study Slavic philologies and want to have their summer school credits transferred to their home university, and members of a free Ministry of Education programme called ?Polish for the Best? for Polish or Slavic philology students all over the world.

The course itself starts with a ceremonial lecture given by a celebrity of Polish culture, such as Krzysztof Zanussi, Andrzej Wajda, Ryszard Kapuscinski or Norman Davies. The participants live in the Piast student dormitory building, where they find all of the necessary facilities and have their board and keep. A course group has ten or fewer students, chosen according to their level, from breakthrough to proficient. Each group is assigned two stewards to take care of them – Polish students who live with the foreign students, help them and are available 24/7.

For Kasia, a student from the International Relations Department, this year is her third summer spent with foreigners in Piast as a stewardess. Her duties are to attend and guide students around Krakow and when on a trip, arrange extra attractions and also help in any potential problems they may have.

“I have to be here all the time, especially when the elder people are around,” says Kasia. “But I love this job, you can make so many great friends here. And we keep in touch after the courses end.”

Both Director Horbatowski and graduate Edwiga concur that the course’s programme makes for an intense introduction to the language.

“We always said that lessons, then afternoon lectures and a lot of homework was too much for us, but now I see that it is all useful and I’m grateful that they made us learn a lot. We are tired, but happy,” says Edwiga, praising the course teachers for being able to skillfully unite a group made up of different nationalities and ages.

A new and popular course entitled “Four Seasons with Polish” has also attracted many people who are in Krakow for shorter periods, as the sessions are open and last two weeks, four times a year, independent of the summer school. The centre’s current plans include opening summer courses for teenagers over 16, which they hope to launch next year.