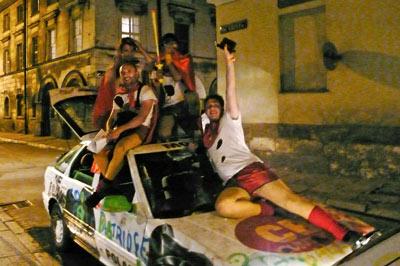 The Krakow Festival Office and the marketing and promotion sector of the Town Council have recently announced plans to advertise Krakow specifically to gays and lesbians, a niche market of major interest to local tourism authorities and the first initiative of its kind in Poland.

“We plan to broaden the current offer in existing guidebooks to the gay target group. In the autumn a travel website will be launched, with a special section relating to gay tourism. However, no concrete strategy has been formulated at this time,” said Krakow Festival Office director Magdalena Sroka during an interview with Innastrona.pl, the “first Polish web portal for gays and lesbians.”

A guidebook aimed at homosexuals is also soon to be issued by the Town Council. However, Sroka maintains that there is no sense in financing an outdoor campaign of billboards and advertisements directed at a minority audience. “Our task is not to promote tolerance, but the city,” stated Sroka.

The central issue is, of course, money. As stated by the European Ambassador for the International Gay & Lesbian Travel Association (IGLTA), Carlos Kytka: “Gay and lesbian tourism is a very lucrative niche market. In the USA alone the value of gay spending is estimated to be over $610 billion and in the UK it is thought to be more than $140 billion. Gay couples, most without children, tend to have higher incomes and spend more on holidays than their straight counterparts. Many cities throughout the world have realised that it makes good economic sense to target this very defined market.”

In addition, unlike the swarms of British and Irish stag parties arriving on cheap flights, gay tourists are better behaved and more likely to enjoy the cultural aspects of the city. Rather than scaring away customers with heavy drinking, gays are more likely to spend their holiday visiting museums and galleries, having a few drinks in a modern nightclub, sitting down for meals in nice restaurants and staying in upscale hotels.

According to Culture for Tolerance Foundation director Samuel Nowak, if Krakow wants to make its mark as a European city, its residents and tourism agents ought to realise that they already have many homosexual guests. “Heading some specific offer for this group seems a bit ridiculous. The city interests only those gays or lesbians who belong to a well established middle class: they choose better hotels, pricier restaurants, more extravagant drinks.” Nowak adds that it would be in the interest of the city to support initiatives or social stances that would make it clear to see that Krakow is an open city in which there is no room for homophobia.

Aleksandra Sowa, coordinator for the Campaign Against Homophobia in Krakow, states that the proposal to encourage gays and lesbians to visit Krakow is a complete fantasy, as the city currently does not have much to offer for homosexuals. “It can merely supply adrenaline to, for instance, gays and lesbians holding hands in the street – because they are susceptible to verbal abuse and physical violence.”

According to Sowa, the city should first invest in promoting tolerance and counteracting discrimination on account of sexual orientation. Only later can it promote Krakow as allegedly friendly towards homosexual people.

At this early stage, it is difficult to see why homosexual tourists would choose Krakow over a more tolerant European hotspot, such as Amsterdam, Barcelona or Berlin. The medieval city has one gay and lesbian discotheque, a few gay, lesbian, bisexual and transgender (GLBT) friendly nightclubs and one GLBT festival during the year, organised by the Culture for Tolerance Foundation. This is not to mention the minimal level of equal rights and acceptance of GLBT present among Polish Catholic fundamentalists, who forget that homosexuals make up a portion of Krakow residents, often denying them their rights to religion and public space.

Coincidentally, Warsaw is to host EuroPride 2010, an international GLBT festivity, and the first such occasion in Eastern Europe. Piotr Wojcik, the IGLTA Polish Ambassador responsible for organising the event, affirms that among the million participants, a significant proportion will make a trip to Krakow, by which time the local strategy should be well under way.