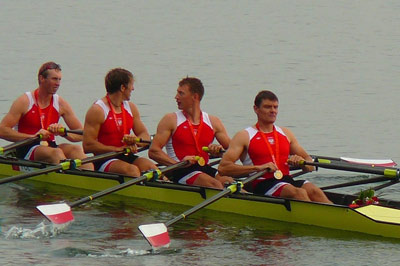 Polish athletes got off to a slow start at the 2008 Olympics in Beijing, but a surprise performance by the male fencing team earned Poland their first medal, one week into the Olympic event. In the end splendid performances by Poland on the water helped secure a 20th place in the overall medal standings, with three gold, six silver and a bronze: a slight improvement compared with the Athens 2004 Olympics – although the total amount of medals for Poland remained the same at ten.

The 2008 Beijing Olympics was packed full of incident before the first tracksuit was stripped off. There were Chinese cover-ups aplenty: over Tibet, over limited access to the internet, over a child lip-syncing at the opening ceremony as the real singer wasn’t deemed pretty enough – even the pride of China wasn’t real: the fireworks. People watching the ceremony on TV saw a different version than those who were actually in Beijing. Animated fireworks were added in the broadcast to make it look extra spectacular.

After the illusions were over (well, apart from the one involving He Kexin’s birth certificate), China began to demonstrate some real magic. To the surprise of the entire world, China dethroned the United States of America as number one in the overall medal classifications. China was expected to perform well, but not to this extent. American swimmer Michael Phelps collected eight gold medals alone, becoming the most successful Olympic athlete ever (fourteen gold and two bronze in his career) and during one single Olympic tournament (eight gold in Beijing). As a one man country, the hypothetical ?Phelps-land? would have ended in tenth place in the overall medal standings. Nevertheless the USA, even with their star swimmer, could not compete with China, who ended an emphatic first with 51 gold, 21 silver and 28 bronze medals. However, USA did manage to collect the most amount of medals: their count of 110 was 10 more than the host nation. This was the first time since the 1992 Olympics in Barcelona (when the Commonwealth of ex-Soviet states secured first place), that the Americans didn’t top the medal standings.

Other memorable moments of these Olympics were brought to the world by Jamaica?s Usain Bolt, who raced to three golden medals with three world records, celebrating all his victories before crossing the finish at the 100, 200 and 400 (relay) metres track sprint. Australian female swimmers Lisbeth Trickett (four medals) and Stephane Rice (three golden medals) dominated in the swimming pool and what about Natalie du Toit of South-Africa, who finished sixteenth in an open water race? It doesn?t sound so special at first, but she did it with a prosthetic leg. Meanwhile Polish table tennis player Natalia Partyka gave her Chinese opponent some serious hard work, even though the Polish 19-year-old was born with only a single arm. Finally, Maarten van der Weijden of The Netherlands captured gold on the 10 km swimming marathon in open water; a remarkable achievement since he successfully battled cancer in the six months before the games.

Personal victories can not always make up personal loss: German Matthias Steiner cried out after winning gold in weightlifting, holding a picture of his late wife who had died a year before. Neither was Georgian wrestler Revazi Mendorashvihli able to hold back the tears when he dedicated his victory to his countrymen, having defeated Georgiy Ketoyev of Russia in the semi-finals. The political tensions between these two countries came to the fore again, when two female Georgian beach volleyball players went head to a head with a Russian pair. Surprisingly, the four women hugged after the game (which the Georgian team won) and it later became apparent why: the women representing Georgia were actually Brazilian. Nonetheless the Brazilian-born Georgians, dedicated their victory to their war-ravaged countrymen.

And what about little Iceland reaching the finals in the men’s handball tournament, losing only to France? A remarkable achievement. Meanwhile fans of American sports saw the USA reclaiming their Olympic title in basketball, but they were kept out of the last ever baseball Olympic final in which South Korea beat Cuba (baseball will not return on the Olympic calendar at the 2012 games in London). Argentina were simply brilliant in the men’s football tournament with a comprehensive 3-0 win over neighbours and arch-rivals Brazil in the semi-finals. Rafael Nadal confirmed that he is currently the world’s best tennis player, whilst the British dominated on the cycling track, and the Spanish ruled the roads on the racing bikes. Togo won their first ever medal, with Benjamin Boukpeti ending third in the K1 kayak and the Chinese government must have turned away when Taiwan seized four bronze medals in weight lifting and taekwondo; it all happened in those two weeks in Beijing.

“And on the seventh day…”

The dearth of Polish medals in the first week made the absence of Olympic medalists Robert Korzeniowski (racewalking) and Agata Wróbel (weight lifting) keenly felt. For seven days Poland remained empty-handed and, with ace swimmers Jedrzejczak and Pawel Korzeniowski already preparing for the trip home, the Poles wondered if they would ever reach gold in China. But it was a self-proclaimed beer drinker that put pride back in Polish hearts. Tomasz Majewski won the men’s shot put contest in the athletic stadium that was called ?the bird?s nest?. After the celebrations had ended, Majewski told the press that his particular discipline was great because it allowed him to enjoy the occasional alcoholic beverage.

Majewski’s golden triumph was preceded earlier that day by a magnificent performance from the men’s epee team in fencing. They secured themselves a medal in the semi-finals, beating hosts China by one decisive point. However in the final the Poles had to take a bow for France; nonetheless the performance was a first ever for Poland in fencing.

Success in a “boat shell”

Poland biggest success however was still waiting in the water. Especially the men, with the ‘lightweight four’ rowing team reaching silver and the ‘quadruple sculls’ sealing victory. The women’s ‘kayak double’ secured a second silver spot in the flat water final. Poland?s peddling in the water was the most prosperous happening for the red and whites, with three medals. It remained for Leszek Blanik to add a final golden medal at the men?s vault in artistic gymnastics.