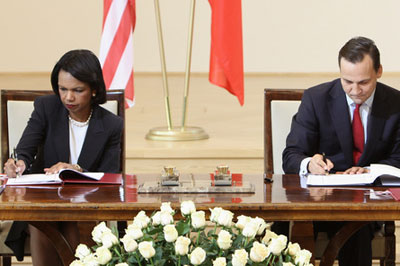 On 20th August, after 18 months of negotiations, Poland and the United States signed an agreement to build a U.S. missile defence base on Polish soil. The deal was signed in Warsaw by U.S. Secretary of State Condoleezza Rice and Polish Foreign Minister Radoslaw Sikorski. “Poland is one of America’s greatest friends,” Secretary Rice declared after signing the document. To be legally binding, the agreement must now be ratified by Polish and American parliaments respectively.

According to the agreement, the American base in Poland will contain 10 missile interceptors and more than 100 U.S. military personnel. Combined with a radar placed in the Czech Republic, these instalments will constitute the European part of an American defence system, a project that the Bush administration has been working on for almost two terms. Poland, in return, gained much-desired security guarantees from the United States, along with a commitment by Washington to help improve Polish defence and the armed forces. Both sides signed the Declaration on Strategic Cooperation, which contains a passage about America’s “substantial assistance to support Poland?s military modernisation efforts,” and “cooperation involving the deployment of a U.S. Army Patriot air and missile defence battery in Poland.”

These two above-mentioned conditions seemed to be the most important goals of Tusk’s government in the long negotiations with Washington. The signing of the agreement may mark not only the beginning of a new chapter in Polish-American cooperation, but also of a U.S.-Poland bilateral security relationship. Shortly after the deal was signed, Prime Minister Donald Tusk declared that “we have crossed the Rubicon,” in Polish-American relations. He went on to say that “Poland and the Poles do not want to be in alliances in which assistance comes at some point later – it is no good when assistance comes to dead people. Poland wants to be in alliances where assistance comes in the very first hours of any possible conflict.” This firm statement was an obvious reference to the Polish experience during the Second World War and a strong reminder of how security is still perceived by many Poles.

The interceptors that are to be based in Poland might be used to shoot down ballistic missiles launched from the Middle East (at present Iran is most commonly mentioned as a possible perpetrator). Both the Polish and American sides stressed that the missile shield is not directed towards any particular country and has only a defensive purpose. This was a clear message to Russia, which had raised its concerns on several occasions, claiming that an American missile base on Polish soil would be treated as a sign of unfriendly intentions.

This Russian context of the missile shield agreement has grabbed most of the headlines, especially in the face of the war in Georgia. The Kremlin has been using the strategy of threatening its neighbours and “near abroad” for years. This has also been the case in regard to the plans of establishing a missile shield in Central Europe. Even before the deal was signed, Moscow had warned Poland about possible consequences. On August 15th, Anatoly Nogovitsyn, deputy chief of Russia’s General Staff, said at a news conference in Moscow that “any military installations in one country are of interest to others,” and that the “destruction of such facilities is always a priority task. Therefore it can?t go unpunished from a military point of view.”

Such a plain threat could be seen by the supporters of the missile shield installation as a precise reason why Poland needs to close the deal with the United States. Moreover, the outbreak of war in Georgia made the missile shield deal look, from some perspectives, like it was indeed aimed at Russia. From the technical point of view, it could be argued that this is nonsense, as it is debatable whether 10 intercepting rockets launched from Poland could cause any damage to Russia (not to mention the political and military costs of such behaviour). The American and Polish sides reject any notions that the shield is directed against Russia. The White House released a statement that the purpose of the shield “is to protect our European allies from any rogue threats such as a missile from Iran,” adding that “in no way is the missile defence aimed at Russia.” During the press conference in Warsaw on August 14th, Radoslaw Sikorski diplomatically replied that “only people of ill intent should fear this agreement.”

Yet the question of war in Georgia and its effect on the Polish-American deal has been raised by a number of commentators. Many have claimed that from a strategic point of view, it is far-fetched to cite the conflict as a primary reason for speeding up the signing of the agreement (which had been negotiated for so many months). On the other, the way Russia handled the war may have made Warsaw and Washington a bit more decisive in closing the negotiations. According to Marcin Bosacki, Washington correspondent of Gazeta Wyborcza, “the war in Georgia played a key role in advancing the pace of the missile shield talks between Poland and the United States.”

Shortly after signing the agreement, the Polish and American sides announced it to be a great success. For the Bush administration it had been something of a last call to close the deal before the election frenzy at home. For the Polish side (where both branches of the executive power should be credited for their efforts), it was timely to show public opinion that in moments of crisis (such as the war in Georgia) Poland has gained a bilateral agreement with the most powerful country in the world. According to Wess Mitchell, director of research at the Centre for European Policy Analysis in Washington D.C., the shield agreement is here to stay for at least three factors. Firstly, more and more NATO countries seem to accept the idea and need for the shield (a factor that helps allay fears of another transatlantic rift); secondly, because it may be really the last resort in dealing with Iran (in case diplomatic options ran out); and lastly, as there are almost no other options visible for the West.

For Poland though, the problem of Iran may be seen as a distant one. Much closer to Warsaw’s interests is a new chapter in Polish-American relations and the reassurance of Poland’s security that comes with the agreement. Therefore, from the Polish standpoint, the missile shield agreement may be perceived as a convenient pretext for a new deal. Nevertheless, it remains too early to deduce who exactly will benefit most from these freshly dealt cards.

One thought on “Poland’s Achilles Shield?”