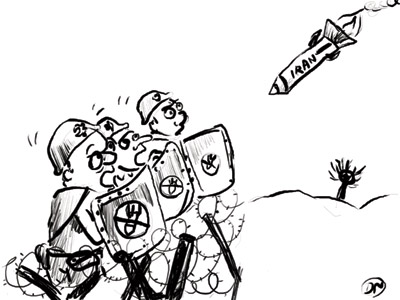 Like the majority of Western viewers who watched the events in Georgia unfold on television screens, in newspapers and on Internet portals, I was outraged by what I saw and anxious to follow each development. These feelings quickly turned to dread as I watched the West stumble in its fragmented reaction after being clearly outmanoeuvred by Putin at almost every turn. In Poland, a slight undercurrent of fear and foreboding hung in the air as though most could already read the writing on the wall. It came as no big surprise when on August 14th Polish and U.S. negotiators announced that, after over a year of negotiations, they had finally reached a deal concerning the missile defence shield.

The final plan will see 10 American interceptor missiles installed at a U.S. military site in Poland and staffed by hundreds of U.S. military personnel by 2011-2013 (a more flexible timeline than initially projected). Furthermore, the U.S. has agreed to install Patriot missiles to help bolster Poland’s defences, which had been a sticking point in the negotiations for months. Finally, according to Polish PM Donald Tusk, the deal also includes a “mutual commitment” between the two nations to come to each other’s assistance “in case of trouble.” Considering the timing of the deal – a week almost to the hour after Russian tanks crossed the South Ossetian border into Georgia ? one can easily assume that the potential trouble mentioned refers to none other than Bad Vlad and his Russian bear. Right? Wrong… Haven?t you been listening? Russia has nothing to do with it!

Over the past 15 months both the U.S. and Poland have maintained, with mantra-like repetition, that the shield is being built exclusively to protect the U.S. and its European allies from rogue states such as Iran (nudge, nudge). Russia, in turn, has criticised the plan at every step and insisted that it threatens Russia’s strategic defences. Without giving credence to Russia’s claims, it is duly noted that the planned military base will be built a mere 115 km from Kaliningrad (oh yeah remember that place), where Russia is said to have stores of nuclear weaponry. Given the timing of the deal and the fact that prior to the Georgian conflict U.S.-Polish negotiations had all but reached a stalemate, it is no surprise that the elephant in the room (or rather the bear in the elephant suit) decided to speak up.

“The deal absolutely, clearly demonstrates what we had said earlier: the deployment (of the system) has the Russian Federation as its target,” said President Dmitry Medvedev in a speech on August 16th. That same day, General Anatoly Nogovitsyn, the deputy chief of staff of Russia’s armed forces, went one step further by saying, “Poland, by deploying (the system) is exposing itself to a strike; 100 percent.” He went on to say that Russia’s military doctrine sanctions the use of nuclear weapons “against the allies of countries having nuclear weapons, if they in some way help them.” And the elephant growled.

So what should Poland make of this supposed nuclear threat? Many Western leaders and the NATO leadership in turn were quick to dismiss the threats as empty rhetoric and mere sabre-rattling. On August 19th, a day before Condoleezza Rice and Radek Sikorski officially inked the deal, Polish President Lech Kaczynski responded to Russia’s threat in a nationally televised broadcast, stating: “No one can dictate to Poland what it should do. That’s in the past… our neighbors should now understand that our nation will never give in, nor allow itself to be intimidated.”

The words may have sounded strong but the rhetoric falls short, as it appears that Poland is playing exactly into Russia’s hands. The fact that Poland only negotiated her way under the U.S. military umbrella after the Georgian invasion was under way, strongly suggests that Poland was indeed intimidated by Russia’s actions. One of Putin’s clear strategic goals was to send a message to all former Soviet and communist satellite states that a similar fate awaits them if they provoke an empowered Russia – and apparently the message got through. Furthermore, whether Kaczynski realises it or not, by building a U.S. base on Polish territory the U.S. will very much be able to dictate what Poland does; that is to say, Poland will be directly responsible politically and militarily for the acts of the U.S. on Polish soil and abroad. It is because of this fact primarily that Russia levied and will certainly continue to levy such grave threats towards Poland.

Timing is everything, which is why I was so dismayed and even embarrassed by the U.S. and Poland?s rush to sign the missile defence deal in the midst of Russia?s war in Georgia. They exposed to the world, and not least of all to Russia, what most people assumed anyway, but they had both refused to admit: the missile defence shield is indeed being built as a check to Russian aggression. In the countless press conferences held after the signing of the deal, Polish and U.S. diplomats looked almost foolish as they scrambled to keep the moral high ground as they condemned Russia on the one hand but tried to convince the world (and even themselves at times) that the missile shield actually had nothing to do with Russia.

After the war in Georgia most Poles now agree that the missile shield is indeed in Poland?s national interest. The only thing that remains now is for the Polish Parliament to ratify the deal. In the interest of good faith I hope every Polish MP, before they cast their vote, is able to look the elephant in the face and say the missile defence shield has nothing to do with Russia. That or they live with the fact that the fundamental premise for installing U.S. missiles in Poland is based on a lie.