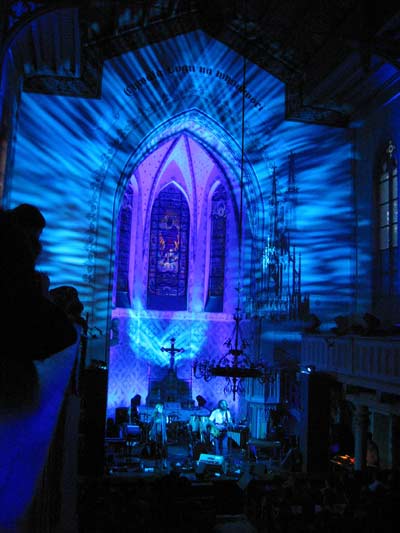 I must start my review of the 2008 OFF Festival in Myslowice with a big thumbs up to the organisers. Rarely in Poland do you find things going so smoothly at such large musical events as this year’s OFF. But not only did the organisers manage to pull off the festival with no complications (other than the weather), they managed to uphold a standard of quality usually only experienced at festivals in the West. Even compared to last year’s edition, the quality of the sound from each stage, the thought put into the visualisations, and the entire organisational aspect of the festival had improved tenfold.

But on to the music. While more kudos is due to the organisers for pulling in such big acts as Mogwai, British Sea Power, Of Montreal, Caribou, and Clinic amongst many others, it was of course the bands and performers themselves that were the stars of this show. Particularly notable was Canadian Dan Snaith’s solo project, Caribou, which when backed by a full band on stage completely transformed his original low-fi recordings into energetic, exploding rhythms and melodies that often needed two drummers to execute. While the big acts on the Main and Forest stages predictably delivered the goods, most of the surprises happened inside on the Experimental and Offensywa stages, where groups like the ambient Kammerflimmer Kollektief or Jacaszek created unforgettable atmospheres, while Max Tundra made a whole tent dance into the wee hours.

However, the most memorable moment of the festival was unfortunately one only experienced by a small portion of the thousands that spent the weekend in Myslowice. On Sunday, a separate concert organised by the festival took place in a small neo-Gothic 19th century Evangelical church, a perfect atmosphere for the often quiet and subtle melodies played by Iron & Wine, a.k.a. Florida native Samuel Beam. At times alone with a guitar, at times backed up by a full band, Iron & Wine played a nearly two hour set of old and newer tracks, often completely rearranged for double the instruments as the original version. The combination of Iron & Wine’s breathtaking music, the perfect acoustics of the old cathedral, and the amazingly well thought out and beautiful lighting was enough to bring tears of joy to any true music fan.