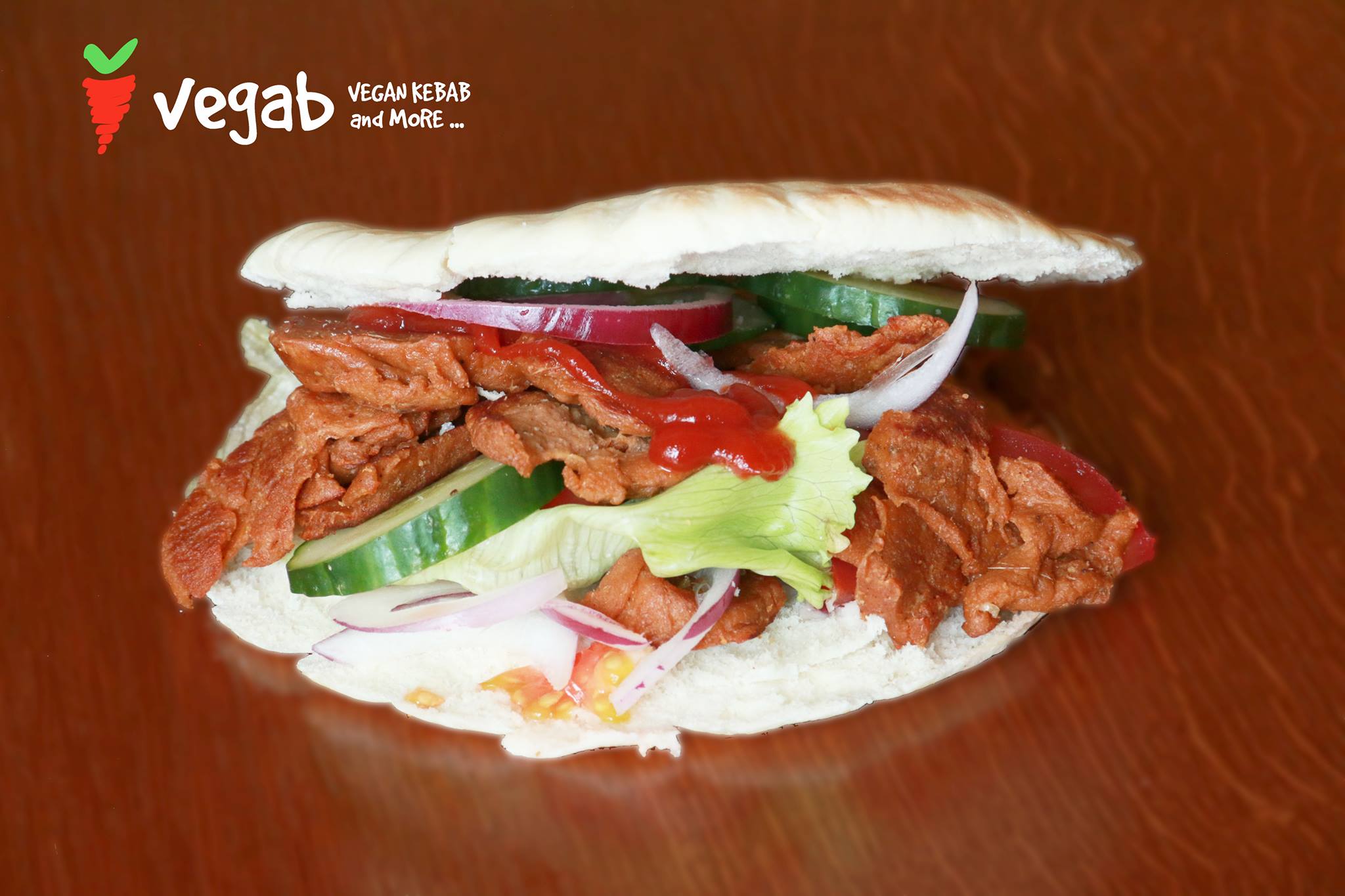 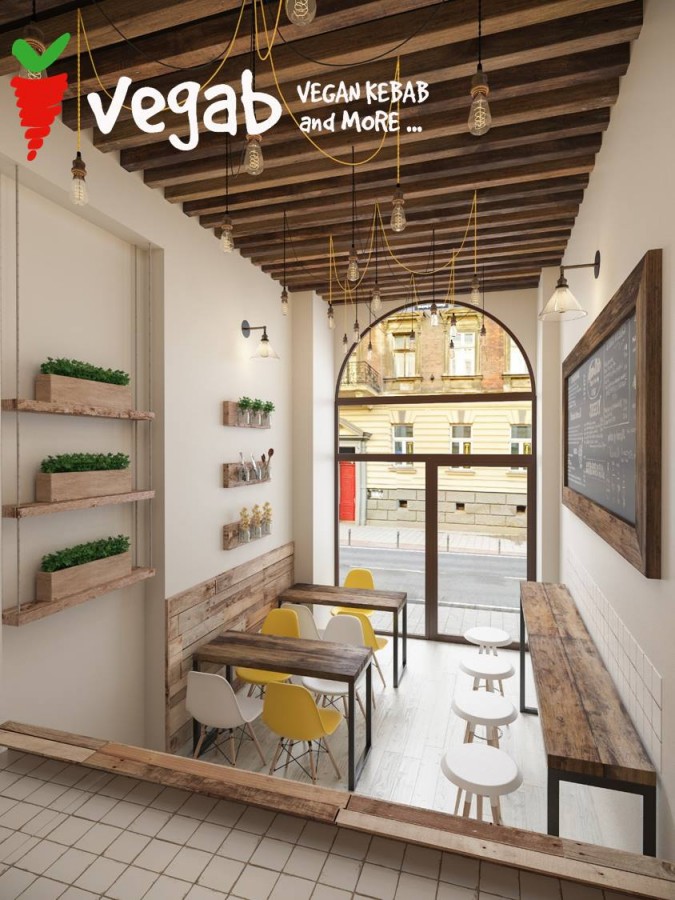 Here’s a thing: Krakow lacks, and has always lacked, in my experience here, restaurants aimed squarely at the sizeable army of vegetarians and vegans in the city. It’s not Krakow’s fault; it’s not even Poland’s. Wherever you go in central and eastern Europe, indeed right through Russia and Central Asia, non-meat eaters are definitely given a raw deal. This is a region of the world where meat, and a lot of it, forms the mainstay of the menu, and thus has it always been. Fighting against it is a battle, I am told (not being a vegetarian myself).

There have been a few exceptions to this rule in Krakow over the years – Greenway and Chimera have fought their corners well, and relative newcomers like Glonojad and Momo have catered with some success to this market – but for a city of this size, that’s not saying a lot. No danger of this country being forced into Marxism, cycling, or vegetarianism, it would appear. Yet.

Vegab has weighed in to attempt to restore some balance, at the bottom of ul. Starowislna – well-located and near the tourist crowds, although I expect its main customer base to be locals and students. It’s styled as a vegan kebab takeaway, aimed presumably at those who miss meat and yearn for a substitute, and its interior reflects that modest ambition. It is rather cosy, with only four tables, and can, I imagine, get rather crowded at popular times. Aim for taking away, unless you’re here at a quiet time of day.

The menu is short and written up on a board – a popular idea these days – and presumably means the owners plan to change the menu from time to time, or at least add to it. There are really only five items on the menu at the moment: ‘vegab’ kebab, hot-dog, lasagna, ‘sushi burrito’ and brownie. The drinks list consists of an array of Fritz colas and soft drinks and a smoothie. I diligently tried everything on the menu over three visits.

My initial choice was the lasagna. Like all the savoury dishes on the menu, this one uses a meat-substitute devised by the owners: a mixture of tofu and vegetables, minced in the usual way and served with vegan cheese and pasta with bechemal sauce. At 12zł, it’s not expensive, but on the other hand it comes plain with no additions or garnish of any sort. I found it to be adequately tasty, though it was a trifle cold in the middle. Not a major problem but a little disappointing. 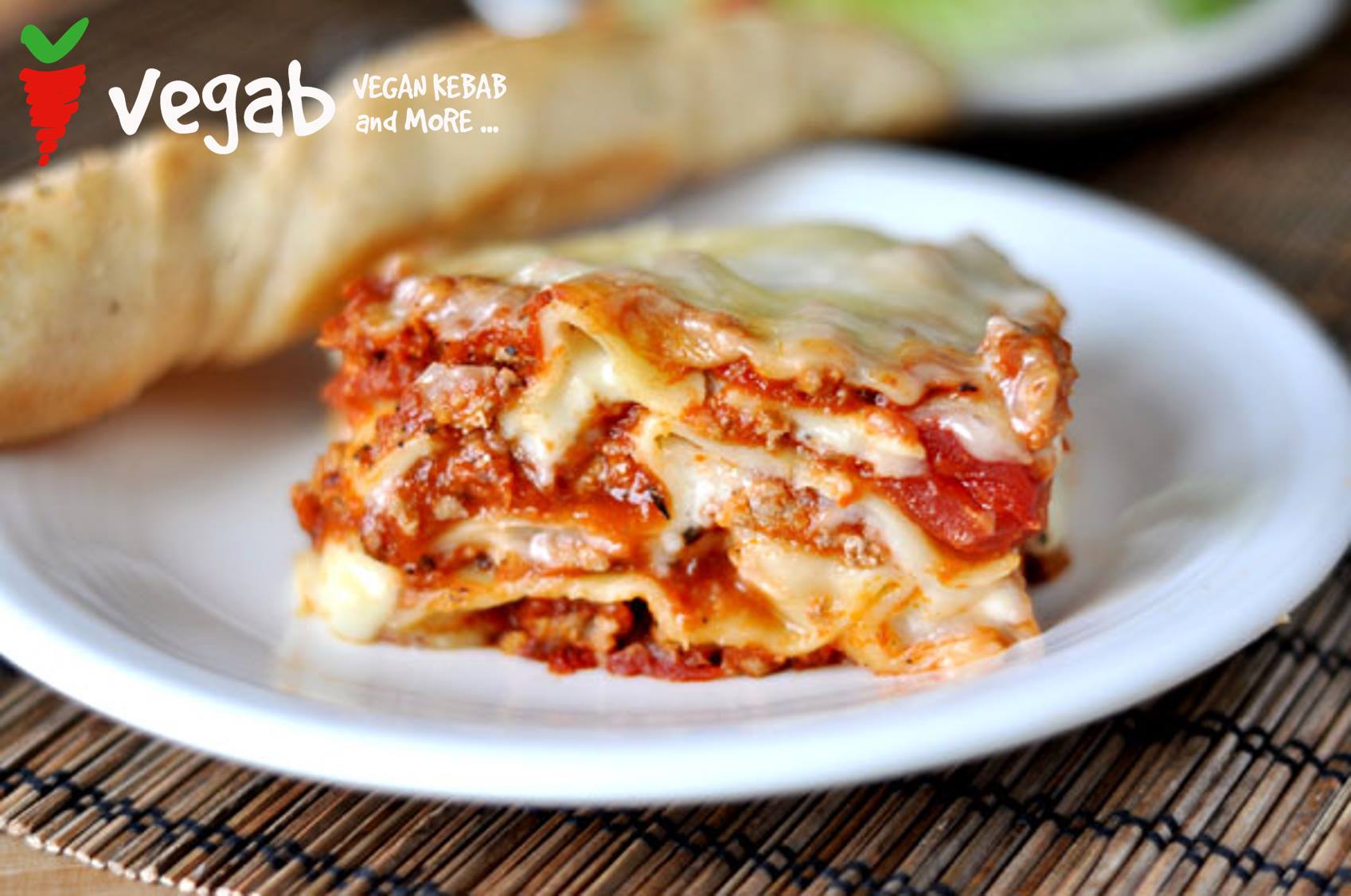 I decided to try the smoothie which is on the menu to go with it. Containing goji berries, chia, barley grass, apple, orange, and date paste, it’s not your typical, refreshing, fruity smoothie, and while it felt like it was probably extremely healthy, it wasn’t really to my taste. At 10zł, it’s a bit over-priced to me, but I’m sure some will be crazy about it.

I followed this up with the brownie for dessert – gluten-free and again completely vegan, and made with chick peas, carob flour, dark chocolate, dates, cayenne pepper and cashew nuts, I really wanted to like this. I found the taste to be ok – but the consistency felt a bit sticky and overall it was too heavy for me. Again though, my frame of reference does not include vegan cakes and I imagine that avoiding the use of eggs and milk in baking is a challenge. The price is certainly reasonable at 5zł. 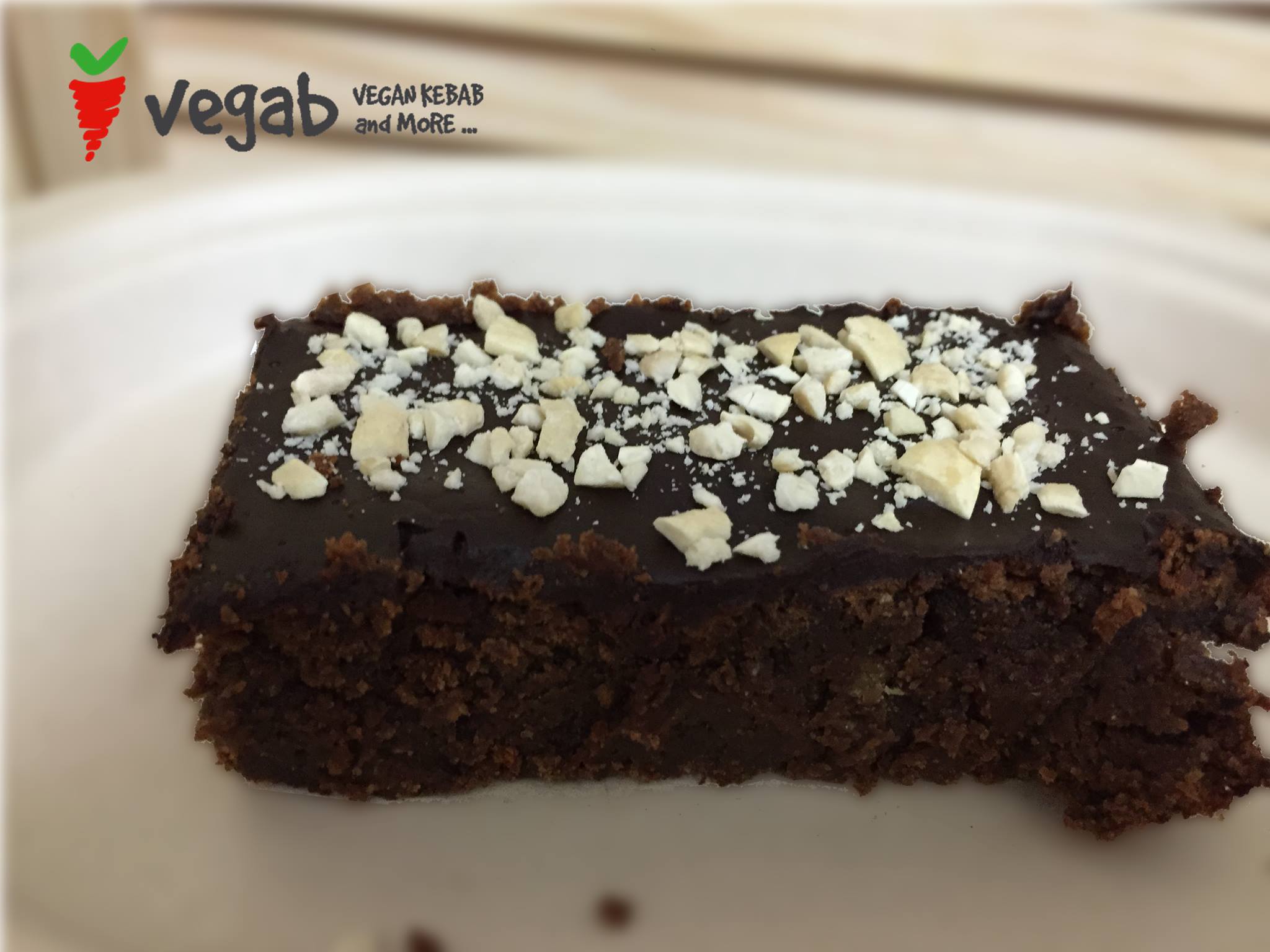 I revisited Vegab to try the kebab, this being the flagship of the enterprise. Containing the same type of vegab ‘meat’ and salad complemented with one of several home-made sauces (hummus, tzatziki, tahini, hot chili, ketchup, mayo), and priced at either 13zł for medium or 17zł for a large one, it is ideal for an after-drink or lunch time snack. The large is absolutely enormous, and I had to take half of mine home with me. While I wouldn’t criticize it – it does exactly what it aims to – kebab in itself, whether meat or vegetarian, has to be pretty special to wow me, and this didn’t – it was just okay. The best thing for me was the hot chilli sauce, which was very spicy indeed. Could I tell the difference between this and real meat? Well, if I’m honest, yes. But if I had been eating the kebab when I normally do, three sheets to the wind, then probably not.

On my final visit, I tried the remaining two dishes – the hot dog and the sushi burrito. First of all, the hot dog. Priced at 8zł, it comes with all the usual salads and relishes and a regular bun. I ate it and felt like I had eaten a vegan hot dog. Again, this may be a revelation for vegans out there, but for me being a meat-eater, I wasn’t bowled over.

The sushi burrito, however, may be the most interesting thing on the menu. Priced at 13zł, it is a huge serving comprising rice, nori seaweed, soy sauce, avocado, marinated ginger, red bell pepper, red onion, sunflower cheese, cucumbers, mung mushrooms, and wasabi with sesame. Unlike regular sushi, it is served as a giant roll, uncut. I applaud this, since it may the first time I have struggled to finish a sushi dish. I found the vegan ingredients in this dish to be interesting and tasty, and at this price, very reasonable; the one dish I would certainly come back for. Washed down with a Fritz cola, this made for a very satisfying lunch. 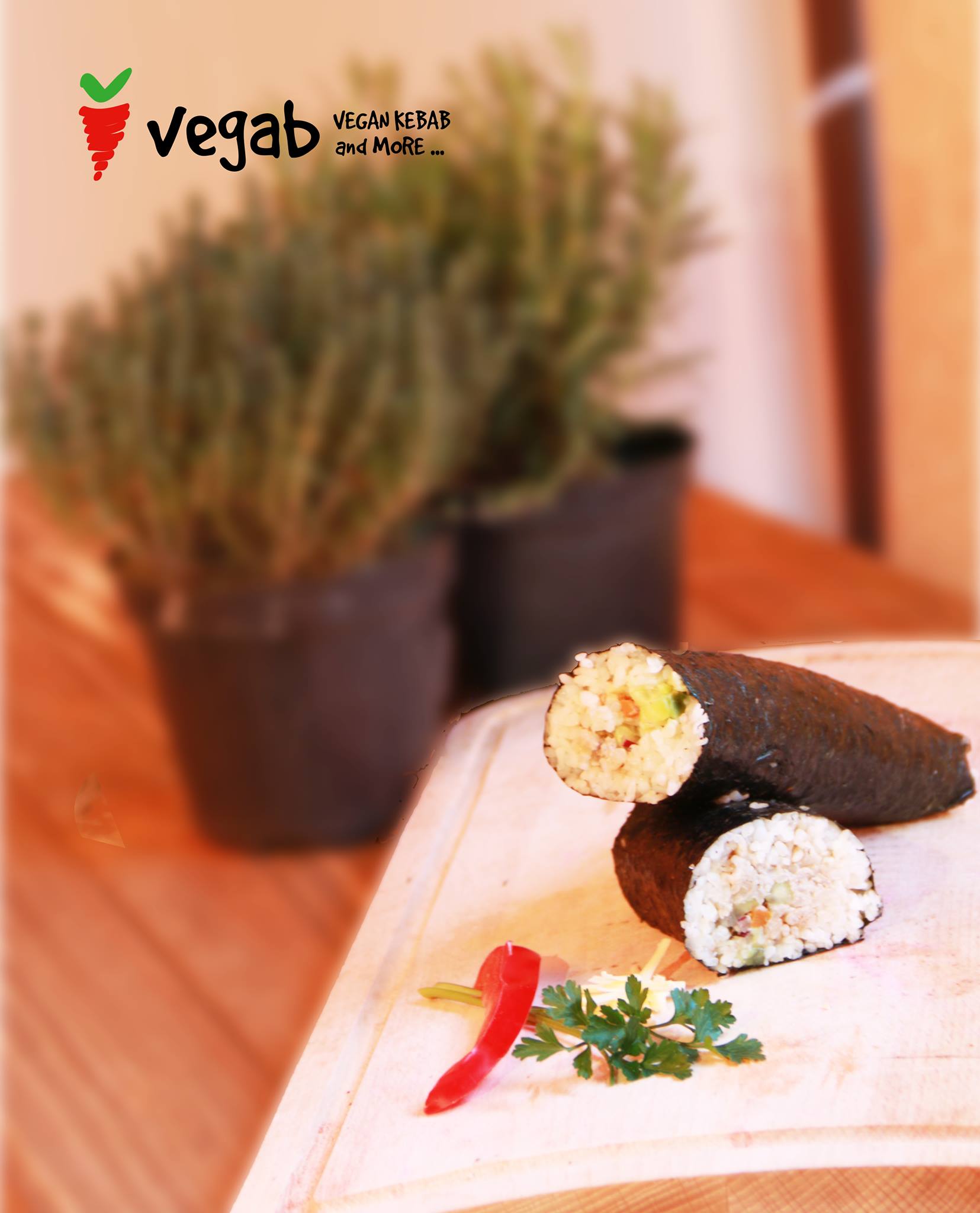 Overall then, Vegab is for me a work in progress, and could do better. I like its attempt to fill an obvious vegan-size gap in the Krakow restaurant market on the one hand, and the prices are friendly – as are the staff. On the other hand, there are a lack of dishes on the menu and imagination in the dishes which exist, and also not enough drinks available. Maybe some hot drinks wouldn’t go amiss.

This place falls between two stools – a standard takeaway and a vegetarian bar, and I’m not sure it’s going to attract many curious non-vegetarians. It probably needs to think about more sit-down dishes like the lasagna and sushi burrito to be more interesting, or simply more flavour and spice. But, if you’re a vegan or vegetarian on a cheap night out and you have a yen for a meat-free splurge, this is the place to go.

4 thoughts on “Drop In: Vegab”