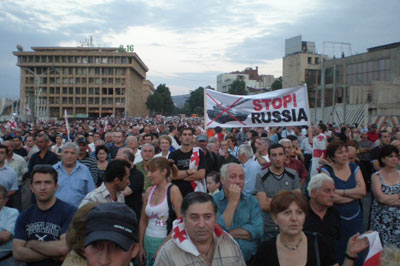 The Russian-Georgian conflict has provided another opportunity for the government and president to see who controls Poland’s foreign policy. “Let’s be clear,” said Prime Minister Donald Tusk at the outbreak of war in South Ossetia: “Russia is the aggressor. All the evidence shows that Georgia’s [territorial] integrity has been violated.” Meanwhile, President Lech Kaczynski announced that the Kremlin was to blame for the violence: “Russia has shown its true face,” he said.

Those few words in the early days of the conflict between Moscow and Tbilisi embodied a remarkable development in the path of the Civic Platform-led government since it took power: namely, a consensus on foreign policy between Donald Tusk and Lech Kaczynski.

That the consensus was over a matter involving Russia was even more remarkable. One of the first statements made by PM Tusk after he took office – much to the annoyance of the Presidential Palace – was to announce that his government would try to thaw out the decidedly frosty relations between Moscow and Warsaw that had developed during the previous Law and Justice government, led by President Kaczynski’s twin brother, Jaroslaw. Tusk believed then that the Kaczynskis had been overly provocative in disputes over the planned gas pipeline from Russia to western Europe by-passing Poland; the anti-missile shield negotiations with the US; a Russian ban of Polish meat, to name only a few.

But since the early days of the war in the Caucasus, a divergence in tone, if not substance, has emerged from the president and government. When Kaczynski said that he and the presidents and PMs of the Baltic States and Ukraine would be going to Tbilisi to show solidarity with the Georgian people, he did not bother to inform the government beforehand. Foreign Minister Radoslaw Sikorski said he found out via the media. After heated discussions, Sikorski decided to accompany Kaczynski to Tbilisi, where the President made an aggressive speech in front of an enthusiastic crowd.

The consensus began to crumble further over who would be attending the meeting on the 1st September in Brussels of EU members to discuss the Russia-Georgia conflict. President Kaczynski insisted that he should be involved in the talks: PM Tusk said that it was highly irregular for Polish presidents to attend such EU meetings – the president usually attended NATO summits, not meetings of the Council of Europe.

At the heart of the matter is a constitutional conflict over who controls Poland?s foreign policy. The Tusk government has insisted that the government merely has a duty to consult the president over foreign policy, but the ultimate decisions have to be taken by Donald Tusk?s cabinet.

The situation has been exacerbated by the embittered personal relations between President Kaczynski and Foreign Minister Radoslaw Sikorski. The latter had been very much the rising star of Kaczynski’s party, serving as Minster of Defence from 2005. But Sikorski resigned suddenly in February 2007, purportedly over a feud with the president’s brother. On the eve of the subsequent general election that autumn, Sikorski jumped ship and crossed over to Tusk’s Civic Platform party, which duly swept into power. Much to Kaczynski’s annoyance, Sikorski was immediately granted a top job in Tusk’s cabinet.

Tusk, no doubt, was anxious to keep Kaczynski away from the EU meeting, fearing that the aggressive posturing of the president regarding Russia might frighten off Germany and France, who have been eager not to provoke Moscow, something that was plain in the Bucharest NATO summit in April when Berlin and Paris opposed an immediate invitation to Tbilisi to begin the process of Georgia’s membership of NATO. It seems that even when the conflict is external to Poland, government and president will find a reason to internalise it.