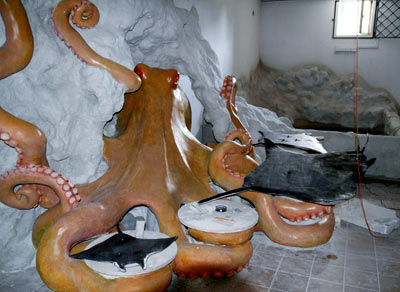 Few visitors to Krakow know that ul. sw. Sebastiana 9 is the site of the Museum of Natural History, and even fewer people know of the grand plans for the transformation of two floors of the building into a state of the art aquarium. However, realisation of the currently half-finished project has been repeatedly stalled.

Nathan Gendreau, American owner of the Nathan’s Villa Hostels chain, is the sole investor in the project, which was begun almost exactly a year ago. Previously, the publicly-owned Museum of Natural History, owned by the Institute of Systematics and Evolution of Animals (Instytut Systematyki i Ewolucje Zwierz?t, ISiEZ) of the Polish Academy of Sciences (Polska Akademia Nauk, PAN), had housed a small, 30,000-litre oceanarium run by a private company in space rented from the institute, in addition to the museum?s permanent exhibitions. The lease of the private company running the oceanarium had ended, and the director of the museum was interested in renting the space, initially hoping to use the funds gained from the rent to open a larger branch of the original museum in another location.

Nathan Gendreau proposed the idea of building a modern, state of the art aquarium comparable to those in the U.S. or Western Europe. In an open letter from the 6th of August, Mr. Gendreau expressed that “the finished museum and aquarium would be a wonderful addition to the children of Krakow.”

In August 2007, Mr. Gendreau met with Prof. Wieslaw Krzeminski, head of the museum. The professor gave his initial support to the idea, and arranged a meeting with the director of ISiEZ, who also expressed a positive opinion. On the 5th of October, Mr. Gendreau submitted an offer, describing the idea behind the aquarium and its value for education and tourism, as well as details involving the modernising of the building and installing WiFi, air conditioning, disabled access, and a café. The offer also stated that Nathan’s Villa Hostels “will undertake the responsibility for the safety of visitors to the exhibition. All expenditures involved with the investment, organisation, and promotion [of the aquarium] will be borne by the firm.” In addition to a written offer, a visualisation was attached that showed details of the proposed reconstruction of the building, and was agreed upon by both parties.

The plans for the aquarium include brand-new cement aquariums protected by shatter-proof acrylic as well as smaller terrariums protected by two panes of glass, disabled access throughout the entire building, 28 touch screen “info points,” 42-inch HD displays for presentations, and several hands-on exhibitions for children, including a “Discovery Room” where children could touch certain marine animals and crustaceans. The building’s 100-person conference room would be modernised with a new sound system and projector, which would be used for presentations for school groups. The plans would be realised with the help of a group of over 40 employees, including students, graduates and scientific and engineering professionals.

Work was scheduled to begin on the 7th of January 2008, though according to Prof. Krzeminski, Mr. Gendreau began construction on the aquarium “without a confirmed project plan,” and before being authorised to do so. Mr. Gendreau disagrees, as the plans were confirmed in the visualisations.

From January 2008, a new director took over the institute, Dr. Zbigniew Bochenski. He visited the museum and met with Mr. Gendreau in February, after which he submitted a positive written opinion on the project on March 4th, stating “[the proposed aquarium] will be one of the most modern objects of this type in Poland. This type of presentation will certainly quickly become one of our city?s attractions most worthy of attention.” On the 17th of March, Dr. Jerzy Szczeklik, the director of the Clinic of Toxicology and Contagious Diseases, also expressed a positive opinion on the safety measures being taken with the aquarium’s collection of venomous species, and the educational value of the collection.

In March of this year, it was revealed that the museum would not move to the new location the professor had hoped for for the time being. On the 18th of April Mr. Gendreau received the first letter of criticism from the institute, stating that the original contract had been breached, as changes had been made that were not mentioned in the contract. It stresses: “The most serious neglect observed in the renovation project was carried out in defiance of [construction laws] without the proper permits. The building of the Museum of Natural History ISiEZ PAN in Krakow lies in a protected zone on the grounds of a former tributary of the Vistula, which should be taken into consideration.” The construction of the aquarium was stopped until the proper permits (for changing the weight of the floor) were acquired.

In the following months, the institute continued to claim various contractual violations, including concerns about evacuation paths that had been changed. According to the original contract, no changes can be made to the building?s construction or electrical and water systems, nor can permanent structures be installed without the owner’s written permission, with the exception of specific changes stated in the contract, which include the installation of a lift to the first floor. However, the professor claims that significant changes were made to the original plans without written approval in the following months, including extending the lift to the second floor, and the installation of concrete aquariums as permanent structures.

The institute appealed to the Voivodeship Agency of Monument Protection (Wojewódzki Urz?d Ochrony Zabytków, WUOZ), which emphasised that all historical elements of the building were to be renovated and protected during the construction, and that all changes must be approved by the owners of the building. In a letter replying to the institute’s concerns, Nathan’s Villa Hostels and engineer Ryszard Walczak stated that all of the appropriate safety and conservation measures had been taken during the current and planned construction.

On the 16th July, WUOZ submitted a written opinion stating that it will allow the construction of the aquarium as originally planned under two conditions, which included preserving antique tiles and the reconstruction of a doorway. Nevertheless, on the 25th of July, ISiEZ submitted a list of breaches of the original contract, and stated that the proposed construction is not structurally sound and much heavier than originally agreed upon, and requested that all work on the project stop until another geological survey can be conducted.

Prof. Krzeminski stressed that his main concern is with the building itself. Including water and the concrete aquarium structures, the new aquarium will weigh 320 tonnes, while the building is over a century old and was built on a former island. However, a reply from Nathan’s Villa Hostels shows several geological opinions that reveal the ground beneath the building to be able to support the proposed weights involved, and because the aquariums will be located on the ground floor, no additional foundations are needed to reinforce the building.

Mr. Gendreau believes that Prof. Krzeminski does not want to lose his museum, and thus is trying to stop the construction of the aquarium. However, as the contract between Nathan?s Villa Hostels and ISiEZ is for only seven years, with the option to renew, the professor believes he is justified in enforcing the part of the contract that disallows the tenant from building permanent structures in the building. Prof. Krzeminski told the Post that at the very least, the tenant must provide the money for the removal of the aquariums at the end of the lease term, if such a decision is made by the institute. However, the security deposit already provided by Mr. Gendreau is more than adequate to cover this.

At the moment, according to Mr. Gendreau, the aquarium is about two and a half months from completion, pushing back his original deadline for opening the aquarium by at least four months.

Recently, communication between Mr. Gendreau and his staff and the institute has all but broken down, and Mr. Gendreau is considering legal action, as according to him, the institute’s actions have caused direct financial losses: “with somebody of my size, which is a mid-level company, even these four-five months of extra costs can be detrimental to the project.” He believes it is the intent of both Prof. Krzeminski and the director of the institute, Dr. Bochenski, to “to try and bleed the investor dry of money.”

Dr. Bochenski is on holiday and could not be reached for comment. However, when speaking to the Post, Prof. Krzeminski stressed that it is not his intention to keep the aquarium project from being realised, but rather to prevent any possible catastrophe from occurring due to what he perceives as unsafe construction.

On the 21st of August, Nathan’s Villa Hostels and ISiEZ received a letter from the Urban Architecture Department of the City Council, stating that the architectural office will approve everything as long as Mr. Gendreau gets permission from the institute for all of the changes, which he claims were in the original contract and visualisations.

At the moment, work on the aquarium has resumed, but judging from its rocky history to date, Krakow’s citizens may have to wait at least until winter 2008 for the Krakow Aquarium to open its doors.