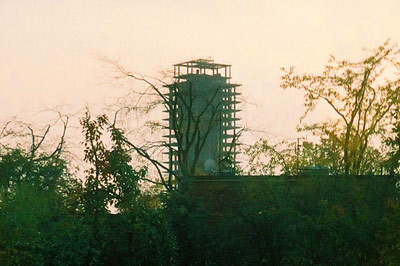 For nearly three decades the tallest building in Krakow (approx. 93m tall) has been the cause of acute embarrassment for the city. Existing as nothing more than an abandoned shell, the 24-storey skyscraper has been dubbed by locals as “Szkieletor” (Skeletor), a wry reference to the ribbed but fleshless villain of the He-Man series, which it resembles.

The history of the building can be traced back to the mid-1960s when a decision was made to construct a modern office, training and conference centre for the Naczelna Organizacja Techniczna (The Supreme Technical Organisation), with construction work finally starting in 1975. Progress slowed however in 1979 with the deterioration of the Polish economy, before halting altogether in 1981. Various attempts have since been made to revive the project but without success, and Skeletor has remained nothing more than a towering icon of communist failure and a sort of anti-symbol of the city, championed by emo kids who enjoyed climbing the structure (illegally) for a cigarette and views of the city.

A change however is in the making. Verity Development won the tender for the building in the second half of 2005, represented by their local minority partners, GD&K Consulting sp. z o. o., and since then Verity (who have a controlling 85 percent stake in the project) have begun planning Skeletor?s resurrection. The concept being to renovate the existing tower, whose structure is architecturally sound, and to add two new wings on either side of the skyscraper. The group have already received two of the three outline building permits they need from the city (issued in April 2008) to realise their ideas. Currently they envisage that the tower will be split between an international four star luxury hotel, on the bottom half, and luxury apartments on the top, and that in addition two wings will be dedicated to A-class offices and commercial facilities. Internationally-renowned architect Prof. Hans Kollhoff has been called in to design the project, which has been titled “Treimorfa” in honour of the three shapes the complex will constitute. The German professor is considered one of the world’s leading architects in designing tall buildings in city centres, and his previous work includes the design of the Daimler Chrysler Skyscraper in Berlin, the reconstruction of the Ministry of Foreign Affairs, also in Berlin, and the “Deutschherrnufer” Skyscraper in Frankfurt.

It is hoped that Treimorfa will be completed by 2012, in time for the European Championships, and the project could have an enormous impact on the district surrounding Rondo Mogiliskie, revitalising the area and attracting more investors instigating what in economic terms is referred to as a “virtuous circle.”

Peter Bradley of Verity Development feels very positive about the success of the project and the impact it could have on Krakow: “[The] Treimorfa Project is a unique opportunity for the historic and beautiful city of Krakow to have a world renowned architect design a spectacular project in an outstanding location. Views from the tower will be unique because there are no other high buildings nearby. Even the views from halfway up the tower are impressive and uninterrupted, while at the very top the panoramic vistas are simply stunning. The location is city centre and just metres from the Botanical Gardens, the newly completed Opera House and a short walk from Krakow’s main railway station and the new Galeria Krakowska shopping centre. The A-class office will be an opportunity for high profile large companies requiring a prestigious address in the centre of Krakow, designed by one of the world’s best architects; not something that has ever been available in Krakow until now.”