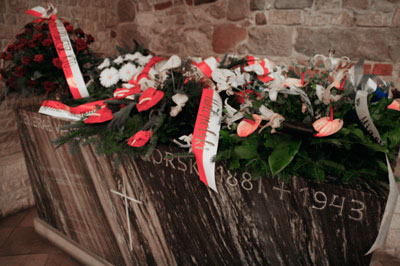 The Archbishop of Krakow, Cardinal Stanisław Dziwisz, has given his blessing for the tomb of General Władysław Sikorski to be opened.

The General, whose passenger plane crashed in peculiar circumstances 65 years ago, is an iconic figure in Poland, and conspiracy theories about his death have never been quelled.

Sikorski was Prime Minister of the Polish government-in-exile from September 1939 until his death four years later.

At 11 p.m. on the 4th of July 1943, Sikorski’s plane took off for London on the return-leg of a trip to British Gibraltar. Seconds after climbing into the air, the vehicle plunged into the water. Of the plane?s 16 passengers, only the pilot survived.

An official British inquiry at the time ruled that the death had been accidental. Yet from the outset, there were cries of foul play:

“This catastrophe,” wrote the Polish ambassador to London in his diary, “coming at a turning-point in the war, when the Big Three meeting is apparently at hand, and when vital decisions require to be taken in consultation with us – is a bewildering visitation of Providence; so much so, that Poles everywhere suspect the hand, not of Providence, but of a felonious enemy.”

The results of the Big Three meeting at Teheran in November 1943 served to fuel the suspicions of conspiracy theorists. Churchill and Roosevelt made it clear to Stalin at Teheran that they would not thwart his territorial designs on Poland. The ultimate conference at Yalta in February 1945 cemented this arrangement, and Poland teetered into the Soviet sphere. It was not until 1993, following the fall of the Iron Curtain, that Sikorski’s body was brought back to Poland.

Theories about the elimination of Sikorski have developed in many directions over the last few decades. The finger has been pointed at Russian, British and even Polish hands. Some have claimed that the General was murdered before he actually entered the plane.

Lech Kaczyński, today’s President of Poland, is backing the belated autopsy on Sikorski, as is Prime Minister Donald Tusk.

“The tragic circumstances of the death of General Sikorski should be clarified,” the President said. “The exhumation may help in this matter. It is always worthwhile to pursue the truth.”

Russian sabotage remains an enduring theme. A pivotal issue is the so-called Katyn Affair, which broke three months before Sikorski’s death. In April 1943, the Germans uncovered mass graves of members of the Polish elite. The Russians denied guilt, claiming that it was a Nazi plot. General Sikorski, then in London, called for a Red Cross investigation. Stalin promptly broke off all relations with the Polish government-in-exile. It was not until 1990 that Gorbachev admitted Soviet guilt for the 20,000 Polish victims.

Many conspiracy theorists have argued that Sikorski stood in the way of Russia’s designs on Poland. They hold that the General enjoyed unique prestige amongst the Western Allies, and hence that he was a critical stumbling block.

Much has been made of the fact that the Russian ambassador, Ivan Maisky, made a late notice visit to Gibraltar the weekend of Sikorski’s death, and that his plane was stationed a stone’s throw from that of Poland’s leader.

Further accusations fly around the figure of Kim Philby. Mr. Philby, a perceived pillar of the establishment, was the head of British Intelligence for Gibraltar at the time of Sikorski’s death. In 1963, he was unmasked as a long-serving double agent, and he spent his last years in Moscow, where he was commemorated on Russian postal stamps.

Another theory, currently being developed as a TV series by Polish journalist and historian Dariusz Baliszewski, implicates Churchill himself in the crime. The Churchill theory has been voiced before, the hypothesis being that the British wanted to appease Stalin. As it stands, British Intelligence documents relating to the incident will remain under lock and key until 2043.

Baliszewski expands on this theory by implicating Poles in the plot. He says that a clique of high-ranking Poles was unsatisfied with the General?s handling of Polish affairs, and that Sikorski and two of his staff were murdered in the British Governor’s residence, prior to the flight. An enduring mystery is that although the plane crashed just metres from the runway, five of the bodies were never recovered. Likewise, the pilot, a man famed for flying without his lifejacket, was plucked from the water with his lifejacket firmly buttoned.

Although acknowledging Russian interests in removing Sikorski, Professor Davies was dismissive of British involvement in any alleged attack, saying that “the British went to great lengths to protect the plane from the Russians.” He added that the freeze on British intelligence documents relating to Sikorski was “not discriminatory towards the Poles,” as this was the general status quo regarding intelligence files.

As it was, a third of the passengers on the doomed “Liberator” plane were British subjects, including two MPs, one of whom, Victor Cazalet, was godfather to Churchill’s daughter Mary. John Colville, Churchill’s former secretary, pointed this out in a letter to The Times in January 1969, describing the allegations as “an absurd fabrication.”

Professor Davies suggests that the tragedy may even have been caused by the most mundane of reasons. A Royal Airforce report conducted immediately after the crash, but not published at the time, attributed the fault to a British soldier who fell asleep while guarding the plane. The report specified that the guard had keeled over, his rucksack slamming into the plane’s controls.

Hardened conspiracy theorists will no doubt refute the British claim, and Professor Davies affirms that “Sikorski’s death is, as it were, unsolved in a final way.” Hypothetically, an autopsy could reveal evidence of foul play prior to the flight. However, in all likelihood, the exact circumstances of the General’s death will remain forever a mystery.