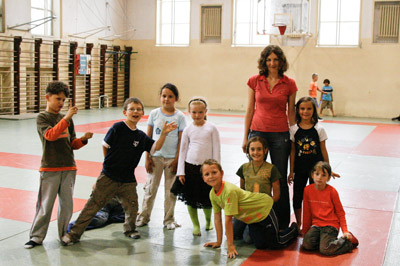 It is 8:30 am and eight-year-old Sebastian is lobbying a volleyball shot down the court. A group of fellow eight-year-olds are having a riotous time performing handstands, and a five-a-side football match is squaring up to be as tense as the last Poland versus Austria showdown.

Welcome to the YMCA’s Summer in the City camp, an adrenalin charged month of sports, activities and days out for around 50 of Krakow’s youngest citizens, who made it to their headquarters on Ulica Krowoderska every weekday during July. The camp is overseen by the dedicated and resourceful Krakow YMCA Programme Director, Jan Bajger, and supported by Polish assistants and two overseas volunteers, Lindsay and myself. Our role was to help run the activities and teach the children simple English phrases and words in a fun way.

The camp gives working parents and any family that cannot afford a holiday away from the city an opportunity for their children to enjoy themselves, make new friends and learn some new skills. Each day was structured around a theme: sport, Europe, ecology, Krakow and fun, helping ensure plenty of variation to keep eager and active minds occupied. Sure-fire hits included volleyball, outdoor swimming and feeding animals at the Las Wolski Zoo, along with trips to attractions such as Ogrod Doswiadczen (?Garden of Experiments?) and orientation activities in Jordana Park.

Teaching the children life skills was woven into the day’s events. A visit from the Community Police involved the children learning about road safety by dressing up as adults and taking on the roles of pedestrians and cars. Amid the giggles, shouting and racing to be first to cross the “street,” a serious lesson was finding its way home.

It was in the early 1980s, upon seeing children idling about, that Jan decided to set up a club especially for youngsters. Gradually it grew and when, in the 1990s, the Polish YMCA was revived (it had been prohibited under communism), Jan took over the running of its Krakow centre. While resources may not be as plentiful as in many children’s centres in the UK or U.S., with the statutory computers and Game Boys, what the centre does have – table tennis, basketball, a huge gym, and even a piece of rope multi-tasking as tug of war and skipping rope – have always proved popular. The YMCA gets no government funding for its camps, so every zloty needs to be raised and accounted for.

“The YMCA is at the forefront of providing activities for children in Krakow,” acknowledged Jan. “Fortunately many organisations are aware of this and some attractions will welcome us for free. A few of the children who come to the camp are from families not so well off and may not have been to the places, such as the museums, that we take them to.”

Jan was also keen to inject an international theme through the camp and for the children to practice their English with the volunteers. This usually happened in chatter when out and about, which gave us a chance to learn some Polish as well. Holding an “English quiz” even introduced the children to some of Britain?s strange customs.

As well as running “Summer in the City,” the YMCA also organises camps outside Krakow, some held in winter with skiing and snowboarding activities, and others during the summer, teaching dancing and sports.

One thing all the camps have in common is enthusiastic children eager to have a great time ? and a director committed to making their time as stimulating and as fun as possible.