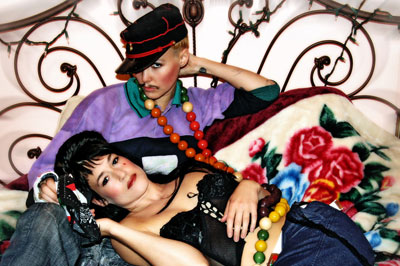 Ten minutes after performing a breathtakingly beautiful and thoroughly energetic set Saturday night at Open’er 2008, I found myself face to face with the two enchantingly eclectic sister sirens of CocoRosie.

Upon entering their dressing room I immediately felt that I’d entered some kind of magical alternate realm; children’s instruments, weird toys, pots of acrylic paints, crayons, markers, lipstick, mascara, neon face paint, glitter and an assortment of costumes and clothes were scattered across the room. Bianca (aka Coco) sat in the middle of the room on a puffy couch and was colouring in a Moleskin journal and Sierra (aka Rosie) was seated in front of a mirror either putting on or taking off some funky make-up. As I settled into a plastic chair I got an eerie, slightly ludicrous feeling one might get before attempting to interview a pair of unicorns.

Bianca: Ok let’s do this thing, let’s hit this. Let’s get this thing done…

[I was slightly taken aback but totally pulled back to reality by Bianca’s street-wise Brooklyn accent and her sharp tongue. No unicorns here.]

KP: All right, lets pour some concrete. How do you feel about the gig?

Bianca: Amazing! I think this was one of the best crowds we’ve played to all summer. There was so much energy. They really made us feel at home.

Sierra: Yeah this crowd was even better than Roskilde last night. There is something special about this Polish audience ? they really felt the music. We could have played all night.

KP: Is this your first time playing in Poland?

B: No we?ve played in Warsaw once before.

S: Yeah, both gigs were pretty great and we felt a lot of love.

For the uninitiated, Bianca and Sierra Cassidy are American sisters both born in the early 80s in separate states and raised separately – each with a different one of their estranged hippy parents. They were reunited in 2003 in Paris when Bianca randomly turned up at Sierra’s apartment. Sierra had been studying in Paris to be a professional opera singer and Bianca was “wandering.” Something clicked immediately and music started pouring out of both of them. They then proceeded to lock themselves in Sierra’s bathroom for two months. When they emerged they had their first album recorded on an amateur tape recorder – this was the beginning of CocoRosie.

KP: What is your least favourite color?

B: We love all the colors, how could you not like any of them?

S: Yeah, there is a time and an emotion for every color.

Feeling slightly unsatisfied I quickly scanned the room for a potentially scurrilous color and my eyes eventually fell on my own jacket.

S: …Ew, maybe not that one. I don’t think I would ever wear anything beige. It’s kind of boring and dull? Bianca you would look terrible as well.

B: Yeah. That’s probably the most fucking depressing, lifeless and disgusting colour there is now that you mention it.

KP: Sorry for mentioning it.

B: Don’t worry about it.

S: Perspiration is definitely inspiration. I don’t know if you know but Bianca makes her own perfumes. I am absolutely in love with the smells she makes.

KP: Are you serious?

B: Yeah, but it kind of blows because I am also allergic to most of the chemicals I have to use to make the fragrances so I can’t actually smell the final products…

The music CocoRosie creates is a unique blend of folk, opera, hip-hop, blues infused lyricism and pop with darkly mystical and vaguely spiritual undercurrents. Their songs are bi-polar creations that very much reflect the constantly converging and diverging musical sensibilities of the two sisters. Almost immediately upon release of their first album they were hailed by many as one of the more original independent artists to have emerged in decades. They have released three albums to date and each represents a different phase and aesthetic in the rapidly evolving and hyper-creative world of CocoRosie.

KP: If you could choose an animal part and exchange it for any of your own body parts what would it be?

S: Yeah, hmm. There are so many to choose from.

B: I know – whale penis. It’s definitely the biggest appendage in the animal kingdom.

KP: And which body part would you exchange it for?

R: …My third eye [she mimics a large invisible phallus extending from her forehead]

KP: I know you are quite busy with touring and working on your own side projects but I’m curious if you are working on any new CocoRosie material?

B: We are always working on new material and actually, we just started working on an opera together

S: Yeah this is a really big project and something neither of us have tried.

B: But that hasn?t stopped us before and this whole experience is kind of like a tripped out dream so we better do what we can before we wake up, you know.