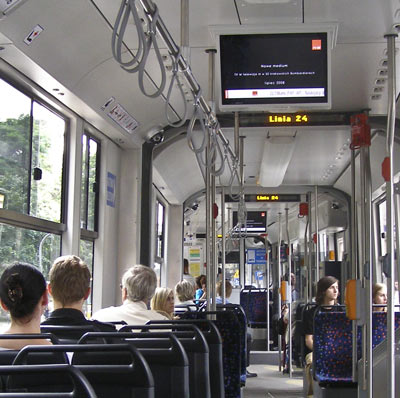 Already highly advanced in comparison to its predecessors, with ticket dispensers, recorded voice announcements and digital screens displaying destinations, the Bombardier is now also equipped with 50 cm-wide LCD panels that communicate traffic alerts as well as relevant reports from the police and MPK. An effort to make public transport more enjoyable for passengers, the project cost 2.3 million zloty.

While televisions have been previously installed in Krakow public transport, they were only found on buses, showing advertisements and promotional films. Now, in addition to communicating public announcements, the televisions allow passengers to keep up with current events. A news ticker scrolls along on the bottom of the screen, presenting up-to-date local and global news headlines provided by the Polish Press Agency. Krakow is the first city in Poland to set up this kind of facility.

Despite hindrances on the inauguration day, causing the display of announcements to take as long as a quarter of an hour, the system was built to allow messages to appear on all screens instantly. However Novamedia Chairman Krzysztof Owczarek stated that urgent releases can be communicated to passengers at any moment, announcing that the slowdown was only caused by tests performed earlier that day and that such delays would not occur again.

The content of the message is conveyed to the TV M dispatcher, who monitors the signal transfer at the Novamedia headquarters, located in Kalisz. The announcement is transmitted either through dictation over the phone or via any device that connects to the Internet, such as a computer terminal. Using Universal Mobile Telecommunications System (UMTS) cellular technology, the tram obtains updates every three minutes.

As for future plans, TV M sales director Milosz Olejniczak stated that new services may be introduced, such as the possibility for passengers to project greetings sent by SMS. However, for MPK, safety remains a priority. Consequently, in addition to the introduction of high-tech screens, MPK has brought out trams with surveillance cameras, which record the happenings within the vehicle.

Monitoring systems have already been put in place aboard buses in Krakow and several other major Polish cities. The police have found that the use of cameras has significantly improved safety measures, as it has helped prevent drinking, smoking, theft and recklessness onboard and assisted in the capturing of perpetrators.

Currently, all text displayed on the new TV M screens is in Polish, but this may change in order to include English-speaking residents and tourists, especially as Krakow continues to improve its facilities to meet growing expectations and advance as a popular European destination.