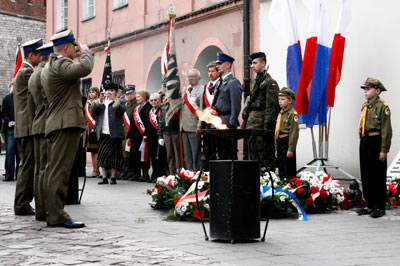 On July 5th the Moscow Municipal Court upheld the decision of the regional court refusing an inquiry into the criminal investigation of the Katyn massacre.

Ten families of the victims had appealed to the Municipal Court to have the matter re-opened. The NKVD (the Soviet Secret Police), acting on Stalin’s orders, was responsible for the execution of thousands of Polish officers and members of the intelligentsia in 1940.

The victims’ families’ Russian lawyer Anna Stavicka is adamant that the families may still have strong grounds for further appeal to the Regional Military Tribunal.

The descendants of the officers are also claiming victims’ family compensation from the Russian state. The judge in the first hearing ruled that compensation was only available directly to the victims themselves. After the unsound ruling the matter was transferred to the Moscow Municipal Court, where the judge again ruled against the claimants. The families are now appealing to the Military Tribunal for a hearing.

In 1990, Mikhail Gorbachev was the first to make an official admission that the NKVD had been responsible for the Katyn massacre. For decades the Soviet government had blamed Nazi Germany for the executions, as the mass graves had been uncovered by Nazi troops in western Russia when Hitler advanced against Stalin.

The Tusk government has been urged by the families and politicians to step in and appeal to Russian authorities directly. President Lech Kaczyński has compared the massacre to an act of genocide, although Russia officially denied this charge in 2005.