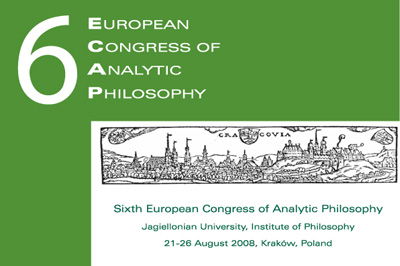 Between the 21st and 26th of August around 500 philosophers, logicians and scientists from around Europe and the U.S. will talk about such topics as how to understand and describe human actions, what kind of formal semantics we should use to describe the natural language, and whether human evolution is a predictable process or do mental events exist.

The European Society for Analytic Philosophy (ESAP) and locally the Institute of Philosophy of the Jagiellonian University and the Polish Association of Logic and Philosophy of Science have organised the Sixth European Congress of Analytic Philosophy in Krakow, which will take place in Krakow this month. The Congress will be held under the honorary auspices of the Speaker of the Sejm of the Republic of Poland, Bronislaw Komorowski, and the President of Krakow, Jacek Majchrowski.

The European Society for Analytic Philosophy has existed since 1991, when Kevin Mulligan found it together with other collaborators in the Swiss village of Zinall. From its beginning the association has had the goal of helping analytic philosophers on the continent to meet and exchange knowledge and experience with each other as well as with philosophers from Great Britain and the United States.

This month, the Krakow Post interviewed Prof. Jan Wolenski, President of ESAP and Head of the Epistemology Department in Jagiellonian University.

KP: What is the main goal of the conference?

Prof. Jan Wolenski: It is similar to the goals conferences usually have: exchange of the experience, presenting of facts and ideas, discussion, creating new contacts and upholding the old, looking for the answer to where we are in analytic philosophy now, and finally discussing organisation problems of the European Society of Analytic Philosophy.

KP: It is the 6th congress organised by ESAP. How do you perceive the heritage of the organised conferences so far, especially the goal of supporting the development of analytic philosophy in the Old Continent?

J.W.: It surly has strengthened its position. The disadvantage of the past conferences was that they lacked printed conference materials. That is why this time we wanted to print information on the plenary lectures and the choices from different sections.

KP: How do you see the condition of analytic philosophy and rationalism on the continent? Can Europe become an equal partner in the dialogue with American philosophy, which after World War II become dominant in the analytic movement?

J.W.: I think that the condition of analytic philosophy in Europe is quite good. The position of the philosophy of this type has become stronger in France, Spain and Italy, countries traditionally associated with a different culture of philosophical thinking. It wouldn’t be good if one type of philosophy began to dominate. In reference to the dialogue with American philosophy, it is not bad. Most of all non-analytic philosophy in the U.S. is strong too. I suppose that at the moment in which the emigration of philosophers from Europe to America will stop, the Old Continent will start to lead again.

KP: You are an expert and propagator of the Lvov-Warsaw School heritage in Poland and in the world; how would you describe this heritage, why did you become interested in this school in the first place and not for example in existentialism? Are its achievements still valid?

J.W.: The interests we happen to have are created very often by accident. My first steps in philosophy were guided by someone who had great respect for the Polish analytic school, and so it stayed that way. Maybe if I was under different influences I would become interested in something else. And maybe the analytic style of thinking is bound to my very structure of reasoning. I think that the achievements of the Lvov-Warsaw School are still valid, such as the ability of joining different traditions, for example logic and phenomenology.