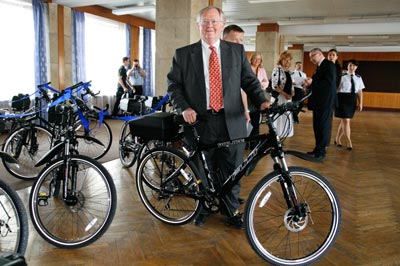 Concluding four years of training for a small group of Krakow policemen, the American Ambassador to Poland, Victor Ashe, handed the officers nine bicycles in a formal ceremony on June 25th.

The bikes were bought to conclude a program called the International Criminal Investigative Assistance Program (ICITAP), whose main goal is the co-operation of police forces across national boundaries, particularly in cases of multinational crime, terrorism, and corruption. The program’s priority is to strengthen the effectiveness, professionalism, and transparency of the criminal process, as well as instil a respect for human and citizens’ rights in the officers. ICITAP has been functioning since 1986 under the wings of the American Department of Justice.

As part of the program, policemen from the U.S. lead lectures and workshops for policemen from other countries, during which they share their experiences with fighting crime across borders. Speaking to the press, Ambassador Ashe stressed the importance of not just formal training, but the “shared experiences that can strengthen police forces” both in Poland and in the U.S.

From 2004 to 2008, American experts provided training for over 200 Polish policemen at the International Specialized Police Training Centre in Legionowie. The training consisted of “community policing” courses, ethics codes and ways of fighting corruption, strategic planning and police administration. Three groups of Polish policemen also spent time training in Charlotte and Wilmington, North Carolina, including six officers from Krakow. As part of the program, the United States government has spent over 800 thousand dollars in the course of training the Polish police officers.

At the conclusion of the program, the American Embassy donated a set of bicycles to the Polish police, part of which had already been received by policemen in Warsaw in an earlier ceremony. In addition, the same policemen had received training from Dutch policemen in the handling of the bicycles, also as part of the program.

Specialised training and properly fitted bikes will allow policemen to more effectively and safely patrol the many streets in central Krakow not accessible by motor vehicles. Ambassador Ashe stressed his belief in bikes being an “effective way of fighting crime,” citing the implementation and success of a similar program while he was mayor of Knoxville, Tennessee.

In a highly pedestrian and tourist-oriented city like Krakow, bikes are “very popular, not only with police but with citizens.” The specially trained policemen demonstrated several tactics they had learned, using their bikes as a kind of shield, with which they could even disarm an armed man. The main goal of the new bicycle force is to increase the safety of central Krakow, both for visitors and for the locals that live and spend time here.