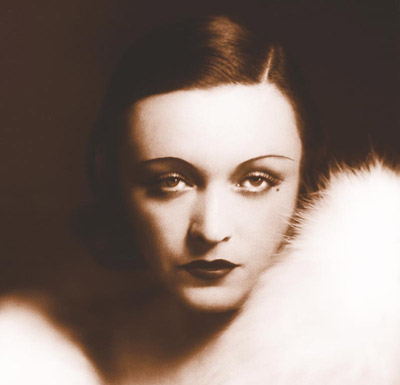 There’s something about the style of the twenties and thirties that lends itself especially well to the creation of cruel, all conquering vamps on a mission to humiliate mankind. Agatha Christie’s tales have a never-ending cast of callous vixens in cocktail dresses, their cigarette holders poised, recently deceased minks curling round the shoulders. These brazen ballbreakers will dispatch a pair of millionaires for breakfast, followed by a cluster of dumbfounded dukes for lunch.

Pola Negri never starred in a Christie adaption, but her life was every bit as colourful – arguably much more so – than the English author’s creations. The daughter of a Polish mother and a Slovak gypsy who was exiled to Siberia for plotting against the Tsar, she blitzed her way onto the Polish stage and became Hollywood’s greatest star of the Silent Era. She married twice: a count and a prince, but grabbed most of her headlines for her affairs with Charlie Chaplin and Rudolph Valentino. Duels were declared over her, and Negri was even said to have had a liaison with Adolf Hitler (the Fuhrer was a devoted fan). The star was so incensed by the latter claim that she sued a French paper for damages, winning 10,000 francs for her troubles.

The Museum of Cinematography in Lodz is a winningly glamorous venue for a Pola Negri show. Housed in a palace that once belonged to Karol Scheibler, “the Cotton King” of Lodz, you could well imagine Pola floating up the stairs, festooned in diamonds, a handful of admirers in tow. Andrzej Wajda shot scenes from his lavish film Ziemia Obiecana (The Promised Land) here, and he cut his teeth as a director a few streets away at the city’s famed film school, alma mater of Polanski, Zanussi and Kieslowski. All of the above are commemorated with a glitzy star on the city’s “Walk of Fame,” and naturally, Pola was one of the first ladies to get the gold star treatment.

Fans of the “Roaring Twenties” will find their very own promised land at the Kinomuzeum this month. The curators have hauled up a mighty catch of Pola paraphernalia. Besides continuous screenings of her classic roles and a brand new US documentary, cinephiles can savour a hoard of film posters, stills, programmes and costumes. Many of the pieces have been jetted in from overseas, with Paramount Pictures and Deutsches Filminstitut amongst the lenders to the show.

As you’d expect, the overwhelming impression is one of a smouldering screen siren: “Yes,” Negri affirmed in a 1978 interview, “I introduced sex into films, but it was sex in good taste and left a lot to the imagination.” Although not conventionally beautiful, Negri was a force of nature, full of energy and blessed with a keen sense of style. Even during her last film role in 1964, she bowled over the London press by turning up to a conference with a cheetah on a leash.

Chaplin was seemingly smitten as a young man: “Why she should love me is something I will never understand,” he mused. “I lack the physique, the physical strength that a beautiful woman admires. However, perhaps it is best that I do not question the gifts of the gods.” Later, in his memoirs, the comedian backtracked somewhat, to which Negri retorted: “Rather than say he behaved in less than a gentlemanly fashion, I would prefer to excuse him on the grounds that all clowns live in a world of fantasy.”

Negri’s star began to wane after her melodramatic behaviour at the funeral of her next beau, Rudolph Valentino, and her later years were spent in relative obscurity. That said, she continued to wear designer eyelashes to the very end. In 1987, a young doctor doing the rounds at a San Antonio clinic asked an eccentric old lady what she had done in her civilian life. Rising with a flush of classic Polish pride, Pola declared: “I was the greatest film actress in the world.” With that in mind, the former queen of Hollywood made her final bow – at her own funeral – sporting a gleaming golden turban and matching chiffon dress.

“Pola Negri: Legenda Kina” runs until the 30th of July at the Museum of Cinematography in Lodz, (Plac Zwyciestwa 1, www.kinomuzeum.pl).

The exhibition will also be shown at the 33rd Gdynia Film Festival, mid-September.
More info at www.polanegri.com