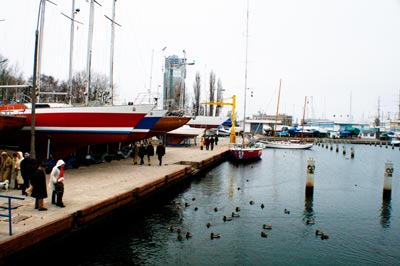 Midnight on the 26th of June, 2008 was the deadline by which the Polish government had to present its plans for restructuring the Gdansk, Gdynia and Szczecin shipyards in order to avoid having to return five billion zloty (a sum which would bankrupt them). That is the amount they have received in state aid since Poland joined the EU in 2004. Under state aid rules, it is illegal for EU governments to spend money on propping up failing industries; any investment made must ensure long-term productivity, include measures to limit distortion to free market competition and be financed mainly by the companies themselves.

The history of the shipyards has been troubled since the fall of communism, and is characterised by mismanagement and lack of foresight. Gdynia and Szczecin were privatised in the 1990s but ended up back in government hands after running into trouble, while Gdansk was sold to ISD, the Polish affiliate of Ukraine’s Industrial Union of the Donbass, last year.

Today, despite a surge in demand for ships, Gdynia, which specialises in car carriers, produces ships at a loss. Its managers failed to anticipate a 300 percent rise in steel prices and did not put in place any arrangements to protect them from currency fluctuations. Contracts it signed in 2005 assumed the dollar would be worth around three zloty, while now it’s worth closer to two.

The issue is an emotional one for Poles, not only because of the potential for 15,000 job losses in an established industry, but also because of the symbolism that the shipyards hold for the Polish nation. In 1970, dozens of people were killed at the three shipyards when the security forces fired on workers demonstrating against rising food prices. It was in Gdansk in 1980 that a svelte Lech Walesa became the spokesman for the striking workers and formed Solidarity, the first free trade union in Poland since World War II, which ended up driving the communist regime from power in 1989.

The EC’s loss of patience caused consternation among the shipyard workers, and three hundred of them travelled to Brussels a few days ahead of the deadline to protest, bearing placards that read, among other things, “That what Russia failed to get round to, Brussels will finish off.” While their appeals for an extension to the deadline were listened to with sympathy by Neelie Kroes, the EU Commissioner for Competition, her position remained unchanged. She reminded them that the EC has repeatedly asked Poland?s governments over the last four years to justify these actions and present alternative plans for the shipyards’ futures.

Needless to say, back in Warsaw the blame throwing is in full swing. President Jaroslaw Kaczinski launched the first salvo by stating that the shipyards’ future has become critically endangered during Prime Minister Donald Tusk’s watch. The Prime Minister’s Civic Platform party retorted that it was Kaczinski who missed the first deadline in 2007 and gave assurances that the actions of his government will be investigated by the Supreme Chamber of Control (the state audit body, which is independent of the government and subordinate to the Sejm).

On the day of the deadline, the Treasury Minister informed Parliament that three potential solutions to the problem are due to be presented to the EC. The basic approach is to merge two of the shipyards, reduce the production capacity of each and rely on investment from private investors to fund these plans. The proposed investment is to come from Polish, Norwegian and Ukrainian investors already operating in heavy engineering industries. If buyers are found for these plans, the EC requires the sale to be agreed by the 15th of July.