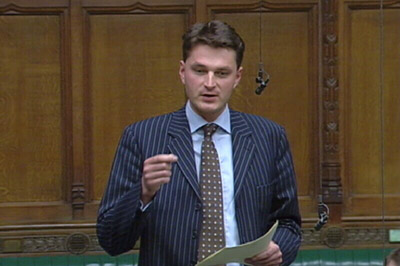 A little after midday on June 4th, a decidedly tall British MP – six foot eight to be precise – rose from his seat in the House of Commons to harangue the honourable members about the gallantry of Polish soldiers during the Second World War.

“As a person of Polish origin,” he proclaimed, “I have tried not to abuse my position here in the House of Commons to focus on Poles, yet I feel compelled to speak out because of my deep concern about how Polish immigration is being covered in the media.”

Daniel Kawczynski, Conservative MP for the borough of Shrewsbury and Atcham, delivered a six-minute diatribe, citing a catalogue of Polish achievements, from the airborne heroics of Polish pilots during the Battle of Britain, to the clandestine exploits of Polish couriers who sneaked intelligence out of Nazi-occupied Europe.

Mr. Kawczynski singled out “the liberal elite of the BBC” as especially culpable in tarnishing the image of today?s Polish immigrants, claiming that the news corporation “will not dare to refer to controversial immigration” from other parts of the world.

The thrust of the speech was to establish a bank holiday that would “celebrate the contribution of Polish citizens to Great Britain since 1940.”
Besides drawing attention to the illustrious successes of Poland?s fighting forces, Mr. Kawczynski was at pains to point out that most of today’s Polish immigrants are “extremely hard working and law-abiding.”

Mr. Kawczynski is not standing alone in his bid ? the bill has been ordered by a cross-party group that includes Liberal, Conservative and Labour MPs.

Nevertheless, the BBC was quick to counter Mr. Kawczynski’s allegations about anti-Polish bias. A spokesman for the corporation declared, “the picture he paints is not one we recognise.” The spokesman vigourously denied that the BBC focused only on Poles, yet did confirm that “Polish nationals make up one of the largest groups of recently arrived legal immigrants into the UK and our coverage reflects this.”

It is not the first time that complaints have been made about media coverage of Poles in the UK. In March this year, the Federation of Poles in Great Britain “reluctantly” dispatched a letter to the Press Complaints Commission, citing the Daily Mail, a newspaper traditionally associated with Conservative voters, as guilty of anti-Polish bias. The Polish Federation noted some 50 Daily Mail headlines that were allegedly anti-Polish in sentiment. The newspaper denied discrimination against Poles, brandishing examples of “balanced” articles.

However, whilst sections of the media have inspired rancour with regards to the handling of Polish issues, it appears that the British public has not been swayed. Christopher Alexander, who has regularly employed Poles at his landscaping firm in London over the last five years, seems typical in his enthusiasm: “I find that they [the Poles] get along well with all the other staff including British, Australians, New Zealanders, and Bulgarians. I get the feeling that people like the Polish here because they are friendly and work hard. London is a cosmopolitan city and diversity in culture has come to be a large part of what makes it special.”

Speaking to the Krakow Post, Daniel Kawczynski remained staunch in his criticism of sections of the British media, stating that there was excessive coverage of Polish immigration, considering that “nine out of ten immigrants to Britain are not Eastern European; they are Africans and from the Indian subcontinent.” He expressed concern about recent acts of violence against Poles, although thankfully the number of reported assaults remains meagre at present.

The MP said that “all in all” he has had “very positive feedback” about his bid to launch the Polish bank holiday. Nevertheless, the bill will not have an easy passage. The concept has come up against some sharp criticism, largely owing to its singularity of approach. Simon Hughes, a Liberal Democrat MP, suggested in the Commons that “to single out one nation and its contribution for one specific recognition would not be in the interests of either the Polish community or the other communities in the United Kingdom.”

During his interview with the Krakow Post, Mr. Kawczynski confided that his fundamental goal was to raise awareness of Polish issues, and that to a large extent he was being “ironic” in his bid to create an exclusively Polish holiday. He added that in many ways it was “not really appropriate” to launch a holiday that excluded other expatriates. Nevertheless, he is wholeheartedly committed to the idea of a bank holiday in tribute to “all hard working immigrants in Great Britain,” whom he asserts should be “supported and cherished.” He added that immigration is not a case of one-way traffic. “Three million Brits now live abroad,” he said, noting that “there will come a day when there are 20,000 Brits in Warsaw.”

The bill for a Polish bank holiday has been granted a second reading in October.