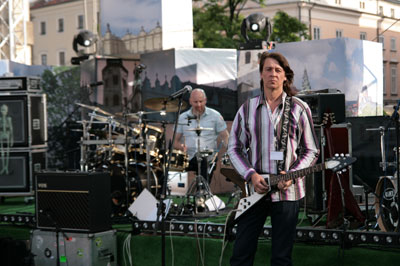 Maciej Malenczuk is the reigning bad boy of Polish Rock. He started out busking on the streets of Krakow in the mid 80s after spending four years in prison for refusing to serve in the Polish military. Since such humble beginnings, he has gone on to be one of the most prolific and influential Polish singers of the last 25 years, fronting two commercially and critically successful bands: Püdelsi (something like “poodles”) and Homo Twist. He has also released several solo albums and collaborated on countless other projects. His rumbling baritone, irreverent lyrics and stylistic elasticity are his trademark, although it is his anarchistic, antagonistic, and bombastic personality that has made him a local legend and national obsession. Krakow Post caught up with him before Homo Twist rocked Krakow’s Market Square on June 5th:

KP: What was the last LP you bought?

MM: I think that it is a successful attempt to return to Motown. I like this return to the sound of Motown although this sound of course can’t be repeated. Actually I’m not sure if this studio still exists anymore. It?s hard to find recordings these days that have that vintage Motown sound. Amy also doesn’t have that Motown sound but she comes close. But in general if this is the direction that pop music is heading then I am all for it.

KP: What are the similarities between the Gypsy music and the blues?

MM: The similarities are that they are both straight from the street, straight from the ground. They are the musical traditions of poor people, from those outside of human society and everything else. Blues is simple and Gypsy music takes everything, everything except the blues. They never play blues, they like harmony. Blues is really, really black music without harmony. It’s all about the movement, the rhythm and the tune, the tune! Not harmony – like John Lee Hooker – very simple but powerful.

KP: So, do you listen to a lot of blues?

MM: I have always listened to the blues. What I’m playing with Homo Twist is also blues – because it’s groovy, because it’s rhythmic and harmony isn’t important. There is harmony, but I tune my guitar like old bluesmen did, to an open tuning. I used open tuning on the streets many years ago because it’s louder and I could play a little melody and still play through the chords, play some rhythm and a lead. That’s how I learned how to play.

KP: Do you think there is a point to being famous?

KP: On the other hand, do famous people have some kind of responsibility to the public?

KP: Do you give money to beggars?

MM: Not always. I give money to the ones who need it. But sometimes I have no idea if someone is cheating me.

KP: Were you ever homeless?

MM: It was a sort of chosen homelessness. As a hippie, you know. I was crashing at my friend’s places long ago. Now it’s not my style.

KP: What kinds of people piss you off?

MM: Many kinds of them; people with small imaginations and those who don’t understand the books that I’ve read. Sometimes I might say a lot of rude words to someone and he might feel offended but actually I’m just quoting Bulgakov and he doesn’t realize it. If he did he would laugh with me. I think it’s a matter of imagination. But I must admit, many times over I deserve to be pissed off by those kinds of people.

KP: Who is your favorite Russian author?

MM: There are a few of them. Bulgakov, Zoschenko, Babel, Erofiev… [silent pause] Dostoyevsky.

MM: Yeah I read a lot. But you know, it’s hard to read nowadays; the telephone rings every other minute, the TV and computer buzz. There’s nothing here in this modern reality. Im trying to read all of Robinson Crusoe, and Swift’s Gulliver’s Travels which earlier I only read parts of. It’s easier to read Swift and his critique of British Society, which he makes a point of doing from the very first page. And in the case of Daniel Defoe, and the whole shipwrecked story – it’s just a pretext for speculation. Defoe builds that whole village and starts living with a few Spaniards, a few natives, a few dozen women… and then children appear. From that moment, the second part of the book begins, which pretty much nobody knows. Because everyone goes to the moment when “the ship comes and saves him.” It’s bullshit! No way. The second part of the book is a reflection on God and on the institution of marriage because they all marry natives and they tried explain “What God be, What God be? And why woman no understand God as me.” Both the natives and the Westerners understand God to be something completely different. So the second part of the book is a reflection on these topics, and I think that is what the author was driving at. But the adventurous part of the book overshadows the rest and most people have no idea what actually happened on that island. I’m now swimming in this book but I also don’t know what happened because I haven’t finished yet [laughs].

KP: Do you play chess?

MM: No, I don’t play chess. I’ve never played actually. I play tennis and I box, amateur of course.

KP: OK, but whom do you think would win in a game of chess between Jesus and Mohammed?

MM: Why specifically chess? Does it have to be a game of chess?

MM: Why not boxing? You know, it seems to me that recently Jesus is perceived to be a bit soft, but he was a much greater revolutionary than Mohammed. Let’s face it, Mohammed was a lot more comfortable; he had 40 wives and such and Jesus on the other hand was constantly in motion so he had to be strong. Mohammed had his harem and was surrounded by servants and Jesus had a whole country against him. So, I definitely think Jesus would win, at least if we’re talking about boxing, because if we talk about chess, I have no idea.

KP: Do you think Islam has its place in Europe?

MM: It has its place! Maybe Europe doesn’t want it, but then again Muslims aren’t asking for it.

KP: And what do you think the future looks like? Will there be more tolerance for Islam in Europe?

MM: I propose converting to Islam. You know, I can’t be completely agnostic nor can I be an atheist because I’m a poet and I’m an artist. It’s hard to be an atheist and an artist at the same time. You can’t make any cake like that. At this moment I think I’m a polytheist. There may be Satan, there may be God, there may be Allah – there could be anything. We adapt to whatever comes our way. I prefer this way than the other. We clearly know that there is nothing to “it,” but we can’t live without “it.” Society would fall to pieces without “it.” Actually, the same thing would happen if people actually understood Freud.