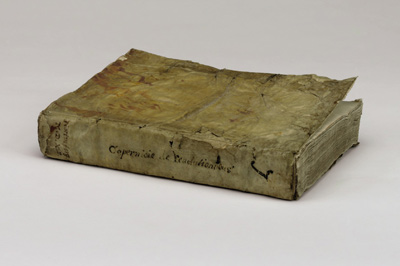 Christie’s – the world’s leading auction house – has sold a copy of Nicolaus Copernicus’s De revolutionibus orbium coelestium (On the Revolutions of the Heavenly Spheres) for a staggering 2.2 million dollars at their New York sale on June 17th.

Though considered the finest extant copy of the groundbreaking work held in private hands, estimates of the going price turned out to be conservative – the sale price more or less doubled forecasts of 900,000-1.2 million dollars. As such, the sale has set a new record for any Copernicus manuscript.

Nicolai Copernicus (1473-1543) (Coppernic, Koppernieck, Kopperlingk, Koppernigk, Coppernig, Kopernik or Copphernic, depending on the country which claims him and the astronomer’s own whims) is, of course, the celebrated scientist who replaced our notion of a geocentric cosmos with a heliocentric one. As such, his name is practically synonymous with revolution in thought. Though he died practically upon publication of his most important book, his work spurred on such fathers of modern physics and astronomy as Johannes Kepler, Tycho de Brahe and Galileo.

Copernicus was also one of the Jagiellonian University’s most famous alumni. He spent his youth in Krakow, and even in his old age, from his castle at the Baltic Sea, was given to making enigmatic comments about living on the Vistula river (whose nearest tributary was forty kilometres away) and about living on “the meridian of Krakow” (which was patently false). The Jagiellonian Library held an original copy of De revolutionibus… until ten years ago, when it was stolen.

The copy of De revolutionibus… sold at the auction was the gem of the Richard Green collection, a scientific library begun in the 1970s. Other prominent first editions sold were works by Einstein, Darwin, Galileo, and an original copy of the world’s first telephone book, published only two years after the telephone’s invention. Altogether the collection numbered over 300 books, and brought in a total of more than $11 million.

Tom Lecky, Head of Books and Manuscripts at Christie’s New York, commented that the auction “confirmed the strength of the scientific field, and more than doubled presale expectations.” He added that “the highlight of the sale was the exceedingly fine copy of Nicolaus Copernicus’s De revolutionibus.”