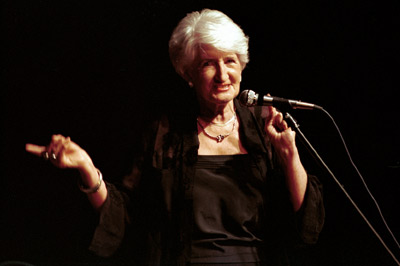 One evening sixteen years ago, not long after Irena Urbanska began performing Jewish songs in Kazimierz, the phone rang:

“It was an old friend of my parents, and she said: ‘Irenka, did you know just how many Jews your father saved during the war?’ And I knew nothing at all about it.”

The queen of Krakow’s Klezmer scene grew up in the south-eastern city of Przemysl. As it turned out, her father, Wladyslaw Sokolowicz, a composer and longtime organist at the Cathedral, had used his connections at the Curia to obtain Roman Catholic birth certificates, with which he created false identities for Jewish children.

“There were many Jewish children hidden in the house opposite – in cellars, in attics. One girl I remember very well, Marysia, she was my playmate, but I had no idea that she was Jewish. I found out later from several people what my father had done. But he never spoke about it, as he didn’t do it for glory or money. That?s why he never made a fuss about the Yad Vashem Institute for the Righteous.”

She does not mention as much, but had the scam been revealed, her father – along with herself and her six siblings – could have been summarily executed by the Germans, a punishment that was meted out to several families in the region.

Urbanska began performing Jewish music relatively late in her career. For many years she was a soloist with the classical Krakow Radio Orchestra and Choir, touring Italy, Germany, France and elsewhere. However, Klezmer always seemed a natural step:

“Przemysl was a typical city in the east with long-established Jewish and Ukrainian communities. My parents had many Jewish friends. Music was played in the house from dawn to dusk. Those were the days before televisions, and music was our main form of entertainment. My nanny Karola used to sing me the Jewish song ‘Rebecca,’ but it always made me cry, and in the end my mother had to stop her singing it!”

During those last years in Przemysl before the war, another budding musician was already performing with one of the city’s Klezmer orchestras. Leslaw Lic was a child prodigy, and fifty years later he would join forces with Urbanska to help bring Klezmer back to Krakow. Not long after they began performing together, he stole Spielberg’s heart when the director was in town filming Schindler’s List. Lic briefly appears in the film, tooting on his beloved clarinet.

Last month saw the release of Irena Urbanska’s eighth studio album, Jewish Wedding. Her voice is as disarming as ever, complemented by Lic’s exuberant clarinet playing. Longtime collaborators Roman Slazyk and Jacek Holubowski, both renowned jazz improvisers in their own right, provide virtuoso turns on the double bass and accordion.

Although now eight albums down the line, Urbanska’s eyes still light up when she recalls her first forages in libraries for old Jewish songs:

“This is a kind of music that is hard to be lukewarm about. Either you can’t stand it, or you become enchanted. I belong very much to the second!” she enthuses.

Klezmer music has enjoyed an extraordinary renaissance in Krakow over the last decade. Groups such as Kroke (two of whom performed with Urbanska during the early 90s) and The Cracow Klezmer Band are in demand at festivals across the globe. Irena Urbanska and her ensemble are regularly invited to play abroad, be it Canada, Germany, Israel or elsewhere. Gratifyingly, reactions from Jewish listeners have been resoundingly positive, in spite of the singer’s initial worries about singing in Yiddish.

“Jews made such a strong contribution to Polish culture – in many respects they co-created it – one cannot forget or discard such heritage. It should be cultivated,” she affirms.