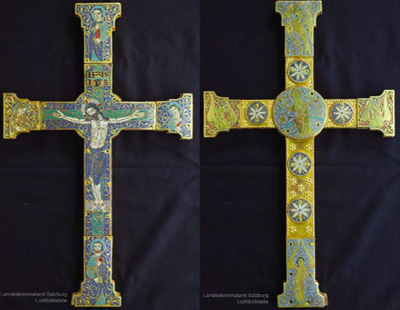 A 13th century enamel cross, seized by the Nazis during the war, has been returned to Poland and is already on display at Krakow’s Czartoryski Museum.

The Limoges processional cross was discovered amidst extraordinary circumstances after an apartment clear-out in the Austrian town of Zell am See in 2004. An elderly resident of the town, moving into an old people’s home, had filled a skip with unwanted junk. A neighbour, Mrs. Lydia Gruber, a devout Catholic, caught sight of a plastic bag containing cutlery and a large and beautifully ornamented processional cross and was allowed to rescue the cross from certain destruction.

Owing to lack of space, Mrs. Gruber had to store the relic under her sofa until last year when she showed it to a neighbour who prompted her to have the treasure analysed by expert hands.

In August 2007 the cross was taken to the local mining museum at Leogang, where the wheels were set in motion for a professional investigation. Before long, Salzburg police had established that the rightful heirs were the descendants of Princess Izabela Czartoryska (1830-1899), founder of the famed pre-war museum collection at Goluchow Castle.

In May this year, Count Adam Zamoyski, great-grandson of the Princess and president of the Princes Czartoryski Foundation in Krakow, travelled to Austria to accept the cross.

“I am delighted by the recovery of a precious piece from this once magnificent collection,” he said, adding that “any action that led to the recovery of further pieces would not go unrewarded.”

The chequered journey of the cross began in June 1939, on the eve of the Nazi invasion of Poland. Princess Ludwika Czartoryska, custodian of the Goluchow collection, moved some of the most precious artefacts to Warsaw for safekeeping, where they were stored under the carriageway of the family’s home. However, the Germans discovered the hoard in December 1941 and the treasures were seized and moved to the Nazi-controlled National Museum. Following the Warsaw Uprising in 1944, Hitler ordered the collection to be moved to Castle Fischorn in Zell am See, Austria. When the war ended, the castle was looted by local people and dealers and no trace of the collection was found by the Czartoryski family.

Following the return of the cross last month, Count Zamoyski expressed his hopes about the emergence of other pieces:

“We have long suspected that a significant number of the looted items found their way into local homes, and this find appears to confirm our suppositions,” he said. “We very much hope that the people of Zell am See and the surrounding area will be moved to consider whether they have not come across pieces of antique jewellery, glass, enamel, and similar items that might be from this collection.”

Anne Webber, co-chair of The Commission for Looted Art in Europe, which represents the heirs, thanked Mrs. Gruber for taking the first step to identify the cross.

“If not for her, the cross would have been destroyed and disappeared forever,” she said. “There are so many pieces still missing from this wonderful collection and we hope that news of this restitution will lead to others being discovered.”